Following the recently granted extension, the United Kingdom (U.K.) will soon trigger Article 50, officially “Brexitting” from the European Union (EU), a decision that will fundamentally change the U.K. and the wider EU. Protesters—many of them young—have mobilized in London, in Westminster, and across the U.K. to express concern about how this move out of the EU will affect their future. Nearly 6 million people, dominated by young voices, have signed a petition to revoke Article 50. Similarly, students and youth worldwide have joined “climate strikes” in a unified call for concerted action on global climate change. Are these widespread protests a harbinger of social change and action on climate, driven by the younger generation?

In a recent open letter to world leaders, the youth strikers stated:

“We, the young, are deeply concerned about our future. Humanity is currently causing the sixth mass extinction of species and the global climate system is at the brink of a catastrophic crisis. Its devastating impacts are already felt by millions of people around the globe. Yet we are far from reaching the goals of the Paris agreement.

Young people make up more than half of the global population. Our generation grew up with the climate crisis and we will have to deal with it for the rest of our lives. Despite that fact, most of us are not included in the local and global decision-making process. We are the voiceless future of humanity.

We will no longer accept this injustice. We demand justice for all past, current and future victims of the climate crisis, and so we are rising up. Thousands of us have taken to the streets in the past weeks all around the world. . . We are going to change the fate of humanity, whether you like it or not. United we will rise until we see climate justice. We demand the world’s decision-makers take responsibility and solve this crisis.

You have failed us in the past. If you continue failing us in the future, we, the young people, will make change happen by ourselves. The youth of this world has started to move and we will not rest again.” 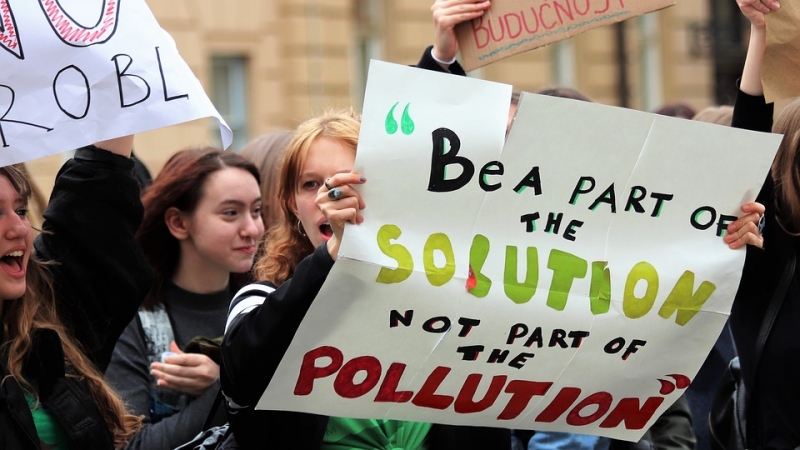 Greta Thunberg, a 16-year-old from Sweden, catalyzed the youth climate justice movement with her solo protest last August. Since this protest, thousands of school students have been inspired to strike and have joined her from Australia, Belgium, Canada, France, Germany, Japan, Switzerland, the U.K., and the United States. Since last summer, the globally coordinated youth strikes saw students in over 123 countries protesting in busy streets and squares in major cities across the world. In London, for example, the most recent strikes stopped traffic on bustling Oxford Street for several hours.

These youth strikers have faced criticism from educational authorities and others regarding their motivation. Media and the government criticized U.K. students, claiming they were looking for an opportunity to skip school. In addition, Prime Minister Theresa May recently criticized the Youth Strike 4 Climate for wasting class time and increasing the workload and burden on teachers. However, 17-year-old Anna Taylor from London, one of the co-founders of the U.K. Student Climate Network and an organizer of Youth Strike 4 Climate movement, stated that the U.K. government was ignoring the urgent nature of the climate crisis. She added that the young strikers are protesting as they feel “betrayed,” don’t trust older generations to protect their future, and have committed to strike in order to have their urgent concerns about climate change heard and action taken. Similarly, in response to the Hong Kong Education Bureau’s condemnation, Thunberg stated: “We fight for our future. It doesn’t help if we have to fight the adults too.”

The youth strikers have also drawn support from environmentalists and international leaders, including Christiana Figueres, the former United Nations’ climate chief when the 2015 Paris Climate Agreement was signed. Figueres recently stated, “it’s time to heed the deeply moving voice of youth. The Paris Agreement was a step in the right direction, but its timely implementation is key.” And last month, British activist George Monbiot published a letter in The Guardian expressing his strong support for the youth strikers:

“. . . the Youth Strike 4 Climate gives me more hope than I have felt in 30 years of campaigning. Before this week, I believed it was all over. I thought, given the indifference and hostility of those who govern us, and the passivity of most of my generation, that climate breakdown and ecological collapse were inevitable. Now, for the first time in years, I think we can turn them around.”

Monbiot continued that although it was his and prior generations that have “failed” the youth:

“. . . those of us who have long been engaged in this struggle will not abandon you. You have issued a challenge to which we must rise, and we will stand in solidarity with you. . . . By combining your determination and our experience, we can build a movement big enough to overthrow the life-denying system that has brought us to the brink of disaster—and beyond. Together we must demand a different way, a life-giving system that defends the natural world on which we all depend.”

The youth movement is rapidly gaining momentum. Protests on February 15 saw over 10,000 youth from the U.K. leaving their classrooms and marching for climate justice. One of the largest environmental protests took place on March 15, 2019, with over 1.4 million youth joining together in a strike from schools in massive protests taking place in over 100 countries.

One U.K.-based academic, whose Ph.D. research examines youth participation in climate change governance, studied the U.K.’s voluntary youth-led organization Youth Climate Coalition (UKYCC) between 2015 and 2018. The research showed that youth are mobilized “by concern for people and wildlife, fears for the future and anger that climate action is neither sufficiently rapid nor ambitious.” Moreover, the climate strikes have enabled “young activists to find like-minded peers and new opportunities to engage. They articulate a collective youth voice, wielding the moral power of young people—a group which society agrees it is supposed to protect.”

The latest youth strike occurred on April 12, and as the movement is continuing to grow, it is sure to be a massive global youth mobilization for the planet. As with the student protests of the late 1960s that contributed to the environmental movement of the 1970s and 80s, perhaps the growing youth protest movement of today is a harbinger for future action on climate change.