This Is How the Light Gets In: The Sunrise Movement and Climate Protests of the Present

Close to 150 activists were arrested during peaceful protests organized by the youth-led organization Sunrise Movement on Monday, December 10. During and after the direct action, in which thousands of activists visited democratic offices demanding support for incoming Rep. Alexandria Ocasio-Cortez’s (D-N.Y.) proposal for a Select Committee on a Green New Deal, 10 additional democratic representatives pledged their support for the proposal. The resolution would create a committee that would have the specific mandate to draft a Green New Deal—the goals of which include 100% renewable energy, upgrading infrastructure, and green technology deployment — that would be ready by 2020. For “green” democrats, this is a difficult proposal to deny, especially given the depth of research on scaling green strategies, as exemplified by ELI Press’ latest release, Legal Pathways to Deep Decarbonization in the United States: Summary and Key Recommendations.

Anyone in the D.C. area can attest to local protests increasing in size and in number, but what is their impact on actual politics on the Hill?

As the partisan divide continues to plague American politics, protests and direct actions to influence political discourse have continued to increase throughout the country, particularly among groups at odds with the present Administration. A 2018 Washington Post-Kaiser Family poll found that voters are engaged, with more than one in four respondents having volunteered with a campaign, donated money, or joined a boycott in the past two years. As is to be expected, the rallygoers were more likely to be anti-Trump, with around 70% expressing disapproval of the current Administration.

Yet, the findings of a Pew Research Center poll released earlier this year suggest that disenfranchisement with the entire American political system may be to blame for the spike in political engagement, rather than run-of-the-mill disagreement with the opposing party. The poll found that 61% of Americans believe “significant changes” in the “design and structure” of the government are needed for it to function well, a meager 35% have a favorable opinion of the federal government, and nearly 70% of all partisan respondents felt that their respective party was “losing.” Another Pew poll found that public trust in the government is near a historic low. Given that these numbers have been steadily declining since 2001, which represents the majority of or the entirety of the lives of Americans aged 25 and under, it is not surprising that young Americans are increasingly taking to direct action tactics to make their voices heard. Among young people, the rate of participation in protests has increased threefold. Concurrently, there has been a dramatic increase in the conviction that collective action can bring about significant change in comparison to 2016, with a notable uptick in engagement among young Latinos and women. According to these 2018 surveys, over one-half of young American respondents believe that older generations have not thought about their future or done enough to protect it.

Nonetheless, there is still disagreement over the effectiveness of such direct action. Critiques include that they are an insufficient mechanism to enact change, that they ignore the structural nature of problems, and that they are more habit than solution. Indeed, there have been scarce tangible results from even the largest protests we have seen in the past year, including March for Our Lives, protests against the recent U.S. Supreme Court nomination, and the Immigrant March that collectively turned out millions of protesters. Yet, the success of December 10’s direct action on Capitol Hill tells another story. 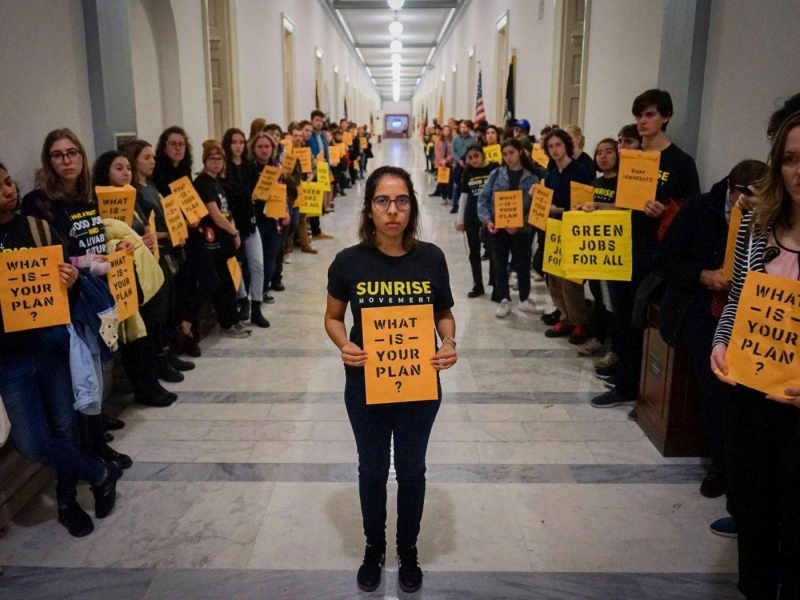 On its face, the Sunrise Movement’s strategy was not out of the ordinary. In front of the cameras, people delivered letters to representatives to express their reasons for protesting and what they are fighting to protect. Impassioned and mostly very young speakers gave rousing speeches, telling of devastating encounters with climate change-fueled disasters and the need to fight for our collective future. The tactic behind the action, however, was quite calculated. Before the group action, participants split into smaller groups to visit the offices of democratic representatives who had not yet pledged their support for Ocasio-Cortez’s proposal. In these more intimate meetings, they spoke directly to representatives, explaining the plan and sharing personal stories regarding their experiences with climate change. Afterward, each of these district-level coalitions joined one of three larger groups, each of which went to a different powerful democratic office. The Movement specifically targeted Jim McGovern (D-Mass.), incoming Chair of the House Rules Committee, incoming House Majority Leader Steny Hoyer (D-Md.), and Speaker of the House Nancy Pelosi (D-Cal.) due to their prominent influence in terms of establishing the Select Committee. Representative McGovern was among 10 representatives to add their names to the list of supporters for the plan. The increase in support for the plan among representatives, which includes the co-chairs of the Congressional Progressive Caucus, Reps. Pramila Jayapal (D-Wash.), and Mark Pocan (D-Wis.), is a tangible outcome that marks substantial progress toward the establishment of a Select Committee. Further, Pelosi agreed to meet with Sunrise Movement organizers after the protest, and Sen. Cory Booker (D-N.J.) announced his support for the proposal over the weekend. Targeting politicians who have already expressed support of climate action so soon after the election was certainly a central reason behind the success.

It is much too soon to write off direct actions and other forms of public demonstrations. As communication technology continues to decentralize information and organization capabilities, we can expect to see a continued rise in such strategic and successful collective actions in the United States. Given that these young people will continue voting in elections to come, it is in the best interest of American politicians to pay close attention to their demands.This action came only three weeks after Sunrise Movement’s November 13 action, which garnered around one-fifth of the number of participants and one-third of the number of arrests when compared to the action last week. Evidently, the group escalated their outreach efforts and organization capacities rapidly between the two actions, perhaps gaining more widespread recognition after the publicity surrounding the first event. This, too, may contribute to the rising pressure on democrats to take action on climate. Further, the youth-led movement has embraced the multifaceted nature of climate change and of the Green New Deal, which emphasizes job growth and improvement, public health, and emissions reductions, thus drawing support and engagement from young people across the socioeconomic spectrum. The intersectional nature of the Green New Deal proposal likely also contributed to increased buy-in for the action by Congress.