Twenty-five years before Silent Spring, Rachel Carson published her first essay in The Atlantic on the wonders of ocean life. Titled “Undersea,” the piece showcased Carson’s “commitment to making the reader feel something,” reports Anelise Chen in the same magazine 85 years later. 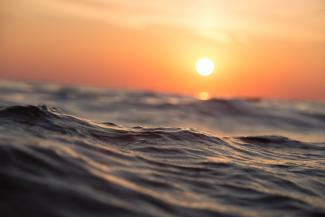 “Who has known the ocean? Neither you nor I, with our earth-bound senses,” Carson begins her essay. “To sense this world of waters known to the creatures of the sea we must shed our human perceptions of length and breadth and time and place, and enter vicariously into a universe of all-pervading water.”

Elegant and majestic, Carson’s moving descriptions of sea life and its habitats, and her subsequent trilogy of books on the sea, epitomized her “deep conviction that wonder had to be at the foundation of any relationship with nature,” writes Chen. So urgently did Carson seek to inspire wonder that she eventually published a book on the very subject, A Sense of Wonder.

Carson’s insistence on wonder has since been backed by psychology research. Professor Dacher Keltner at the University of California, Berkeley, found that experiencing awe—just a few rungs up on the emotional ladder from wonder—helps people feel happier and less anxious. Whether through connecting with nature or gazing into a starry sky, reaching a state of awe makes people feel more connected to others, and more willing to make sacrifices for the greater good.

Yet Keltner also warns that “our culture today is awe-deprived.” As a result of spending “more and more time working and commuting and less time outdoors and with other people,” he wrote in 2015, “people have become more individualistic, more self-focused, more materialistic, and less connected to others.”

The botanist and writer Robin Wall Kimmerer argues modern technology plays a role, with devices distracting us from the small wonders all around. “Have we become dismissive of what takes no technology but only time and patience to perceive?”

Chen lays out even more severe consequences. “Rather than stopping someplace to get to know its rhythms and cycles, we sever and uproot ourselves by living through screens and portals. All of this helps maintain the harmful illusion that if one environment gets destroyed, there will always be some other ‘away’ to escape into.”

Today, Carson’s message on the importance of wonder rings more true than ever. “Those who contemplate the beauty of the earth find reserves of strength that will endure as long as life lasts,” she writes in A Sense of Wonder. “There is something infinitely healing in the repeated refrains of nature—the assurance that dawn comes after night, and spring after the winter.”

Yet as the climate crisis alters the very seasons Carson spoke of, and warms the seas that she so painstakingly described close to a century ago, her legacy also leaves an unmistakable political footprint. “Perhaps she sensed that, without [wonder], an emotional connection with nature would be impossible,” Chen writes. “Without it, the environmental movement had no hope.”