“For everything there is a season,” says the old Pete Seeger song, quoting the much older still book of Ecclesiastes. It seems that we are currently in the season of walls. The physical manifestation of this particular period may be the issue of the wall on our southern border. But there are other walls, and some of them have law as their concrete or steel.

This is on my mind coming off a gathering of environmental thought leaders at the Wingspread Retreat Center in Racine, Wisconsin — a collaboration by ELI and George Washington Law School around the idea of “reimagining environmental law.”

A good deal of discussion centered around an important new book just published by ELI Press entitled Legal Pathways to Deep Decarbonization in the United States. The book is premised on the idea that while a number of technologies and other methods are available to achieve radical reductions in greenhouse gas emissions, there are numerous impediments to implementing these technologies and methods at the necessary scale and speed. Legal Pathways is an effort to identify these impediments and devise ways to overcome them. 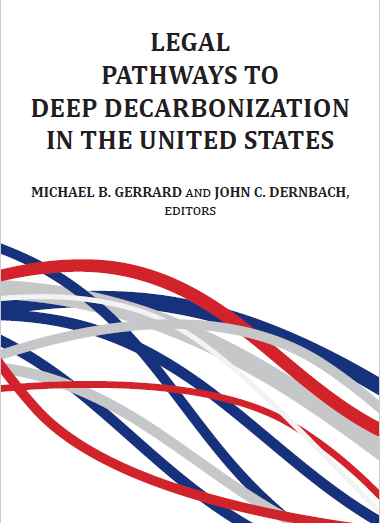 Essentially a playbook for policymakers and lawyers, the book outlines over 1,000 recommendations or law-based pathways for reducing U.S. greenhouse gas emissions by at least 80 percent from 1990 levels by 2050. This 80x50 target is often described as “deep decarbonization,” in the sense that it would require systemic changes to the United States’ energy economy.

So, on this question of walls versus windows, there was a particularly spirited debate at the Wingspread event about how to deal with the use of federal statutes like the National Environmental Policy Act and the Endangered Species Act, as well as state counterpart laws, to fuel local opposition to wind and solar projects. The concern behind the debate was that the energy transformation needed to respond to the climate challenge is being impeded in part by use of these legal tools.

Even when local opposition can ultimately be overcome, such opposition can slow project progress and, because of delay or other risk factors, put project financing and viability at risk. The net of this is a fairly slow progression to our energy future. For those who see rapid transformation of our energy system as pivotal to a successful climate change mitigation strategy, the rub is obvious.

It was fascinating to hear a group of lawyers who would likely in any other circumstance be staunch defenders of NEPA and the ESA questioning out loud whether these statutes should yield in the face of the climate dilemma. How should local environmental impacts be balanced against a mega-challenge like climate change? If the environment nets out to the positive through transformation to more renewable energy, should this be a sufficient response to localized environmental opposition? If, as climate scientists suggests, broader biodiversity collapse may attend anticipated changes in temperature, should incidental taking of species at the hands of wind or solar projects be seen as an unavoidable necessity? If there is a need to open the window more fully, how should that be accomplished?

Exceptions to these laws could be created, but this may be difficult to do in a way that does not open the door to other efforts to work around these foundational statutes for other kinds of development without compensating environmental positives.

Are there ways to use the existing framework so that the values of public engagement, alternatives analysis, and mitigation of localized impacts are honored rather than abridged? Could we, for example, frame up the broadest programmatic EIA in history, with the United States’ energy transition serving as the “major federal action” under review? Could a nationwide EIS and wildlife conservation plan fashioned around such a review serve to overcome, legally and politically, local opposition to wind and solar projects?

As you can see, the event at Wingspread brought forward more questions than answers about whether and how to open the window, but the questions always come first.

[This piece originally appeared in the May – June 2019 issue of The Environmental Forum® and is reprinted with permission. A podcast about the book is available at https://www.eli.org/podcasts (Episode 9).]