Some Deductions on Induction

I encountered an induction cooktop for the first time recently, and my life has never been the same. Boiling water, which usually bores me to tears, took half as much time as it did on a gas stove. Garlic sizzled in seconds; broccoli softened in a minute or two. With a press of the on button, I sped up time itself, whizzing through a recipe that would take me an hour on a traditional electric stove, 45 minutes on a gas cooktop. 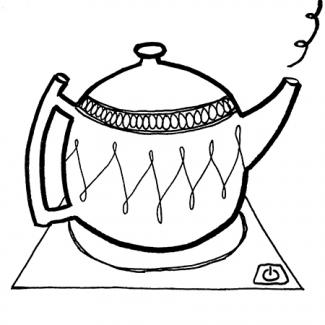 I felt as if I had been catapulted into the future of cooking, one free of accidental burns and those stressful mornings when the stove just won’t light. And I’m not the only convert. An article in March in the New York Times, “The Case for Induction Cooking,” sung the technology’s praises. The magic is in the electromagnets, which heat your pots and pans directly rather than heating the stovetop first. This prevents your kitchen from becoming a sauna in the summer—and it can also be better for your health.

Unlike gas stoves, induction doesn’t require the active combustion of natural gas, meaning it emits fewer air pollutants. A 2020 study led by the Rocky Mountain Institute on indoor air pollution from gas stoves claims, “Burning gas in buildings is not only a threat to climate action but also to human health.” The experts raised concerns over elevated levels of nitrogen dioxide in particular, a toxic gas linked to respiratory and cardiovascular problems, especially in children and other vulnerable populations.

It turns out that induction stoves are also a boon to the environment. Compared to gas stoves, induction cooktops don’t inherently involve the release of methane, a potent greenhouse gas. Methane, as noted in this issue’s Debate, is over 80 times more effective at trapping heat than carbon dioxide in the short term. That means eliminating methane could make a crucial dent in the race against climate change.

A recent Stanford University study found that even when turned off, gas stoves can still emit methane. In fact, researchers found that 80 percent of the methane coming from stoves happens when the stoves are not in use—“from loose couplings and fittings between the stove and gas pipes,” as reported by NPR. Their findings were consistent regardless of the age or brand of the stove.

Induction’s instant-heating technology taught me that I could, in fact, fry a perfectly crispy egg. How did it take me so long to live up to my culinary potential?

For one, I had to travel abroad to even find such a stove. The Times reports that under 5 percent of homes in the United States use induction. They’re currently more expensive than other stove options, though “industry experts agree that, as demand increases, prices will fall.” There’s also a culture of cooking with gas in this country that NPR says is influenced by “a decades-old ‘cooking with gas’ campaign from utilities.”

Despite some roadblocks, induction’s future is just starting to heat up. New York City, Seattle, and other cities have recently enacted bans on gas-powered heating and cooking in new buildings. The policies arise in a wave of campaigns to electrify buildings on the path to net-zero carbon emissions, potentially expanding the market for induction. In the meantime, you can find me sautéing in the fully electric kitchen of my dreams.