Environmental Justice in Urban Development: The Problem of Green Gentrification

Former railroad turned elevated park, the New York City High Line presents a prime example of creating new green spaces to beautify, ameliorate, and revitalize surrounding communities. Although certainly one of the city’s most popular parks, the High Line also serves as the culprit for a sharp 35% increase in adjacent housing values. As urban planning and sustainability collide, leaders around the world are beginning to realize both the economic and environmental benefits of green space in the public realm. However, rapidly introducing attractive green spaces to areas that historically lack environmental resources creates a process known as “green gentrification.”

Green gentrification occurs when city planners implement green amenities such as parks and gardens with the intention of improving environmental conditions and community aesthetics, while often overlooking increases in property values and the subsequent displacement of low- income, often marginalized, community members. City planners inevitably displace these communities through the introduction of green spaces when they do not implement provisions to protect community members. The foundation of green gentrification itself is complicated, as it is difficult to perceive additional green space as a negative policy decision. The problem lies in the fact that developing green space is not solely for the benefit of the common people, but also for the economic advantages it may bring—making it so greening projects can serve as a harbinger of environmental justice issues. 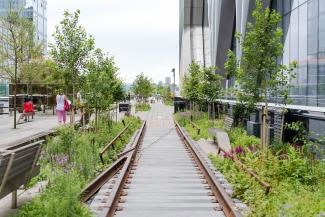 As the introduction of parks and green spaces alters the aesthetics of communities, inevitably appealing to the taste of new middle- or upper-class residents, an uptick in housing prices shortly follows. Increased rent prices and a shift in the target market of neighborhood stores craft a community unaffordable to those who inhabited the area before the introduction of green space. Without a proper rent control or anti-eviction policy in place, renters in increasingly gentrified areas, usually people of color or working-class individuals, suffer from displacement. The departure of these residents not only involves the physical migration of community members, but also a release of community identity, culture, and values. Often, what once was a vibrant and racially diverse community transitions to a racially and economically homogeneous one.

Green gentrification is certainly not a reason to do away with introducing green spaces to communities that need them all together though. Vast amounts of data demonstrate that communities with higher quantities of natural vegetation, fields, and flowers tend to have greater community well-being. This data is especially concerning as low-income communities tend to have less access to green spaces, parks, and gardens than higher-income communities. However, the current method of community revitalization through implementing green spaces must be scrutinized, particularly when policymakers do not emphasize the establishment of protective housing policies and collaboration with local community members.

The Environmental Law Institute’s Blight Revitalization Initiative for Green, Healthy Towns (BRIGHT) program directly tackles revitalization in areas of blighted, vacant, and environmentally impaired properties in overburdened communities, but with an emphasis on community collaboration and community desires. The BRIGHT program is developing the BRIGHT Guide, which empowers communities to plan their own corridor project by providing instructions, resources, best practices, and lessons learned from previous Area-Wide Planning Grant winners. Rather than delegating policymaking and urban development to government authorities who are often disconnected from the communities with whom they work, the BRIGHT program directly integrates community members into creating the change they hope to see in their local neighborhoods.

Inspired by the BRIGHT framework, the Whitesburg community in Kentucky developed the Whitesburg Corridor Project, which ultimately revitalized the North Fork Kentucky Riverfront and the historic Downtown Whitesburg. By placing local organizations, such as Appalshop, a media, arts, and education center, and local leaders in the forefront of community revitalization, the capacity to create meaningful and beneficial change increased. These partnerships with community organizations pushes revitalization to be productive, rather than destructive, to communities. This mindset and revitalization structure can be applied throughout many urban development projects, including those looking to implement more green resources.

In order to protect marginalized communities from the detrimental effects of green gentrification, fair policymaking with community involvement, an emphasis on environmental and housing justice, and a holistic view of the impact of green resources must be adopted. By using frameworks such as the BRIGHT program and other urban revitalization tools that consider the myriad effects that can result from even simple additions to communities, such as parks and gardens, we can work toward developing more green and equitable spaces for all.