A longstanding problem for solar farms has a surprisingly cute solution. “Sheep are the solar industry’s lawn mowers of choice,” writes Amrith Ramkumar in the Wall Street Journal. Farmers maintaining thousands of acres of panels need to contend with tall grasses, which, unabated, can obstruct sunlight. Enter the star of nursery rhymes and an unexpected hero of renewables. Hard-working flocks are now generating millions of dollars in annual revenue by helping to chomp on pesky weeds. 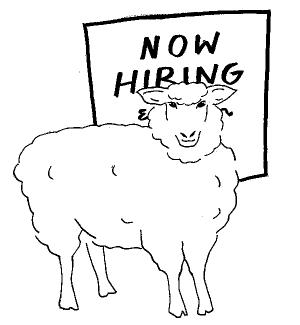 Many grazing animals were initially considered for the role. But some, like cows and horses, were too tall to tidy up grass underneath low-hanging panels. Others, like goats, strayed from the assignment—“chewing on wiring and climbing on equipment,” Ramkumar writes. “Sheep—docile, ravenous, and just the right height—easily smoked the field.”

The recent boom in solar has unexpectedly shot up demand for shepherds, “centuries after [their] breakout roles in the Bible,” Ramkumar writes. He reports that in just four short years, an estimated five thousand acres of solar fields employing sheep in the United States has now grown to tens of thousands, though there doesn’t appear to be an official head count yet.

Finding enough sheep has posed challenges. The Journal notes that while some advanced courses for solar grazing are offered through North Carolina State University and Cornell University, entry-level classes are scarce. Meanwhile, shepherds are already taking out loans to buy more sheep. One shepherd interviewed by Ramkumar spent $500,000 to purchase additional ewes to secure a contract with an energy farm.

The American Solar Grazing Association, a society that this editor is delighted to find exists, touts many other perks for the practice beyond clearing grass. “Solar grazing contributes dairy, meat, and wool to regional markets,” the group’s website notes. “Farm incomes are down, and solar grazing allows farmers to increase and diversify revenues without taking land out of food production.”

The sheep reap benefits too. “The vegetation at solar sites becomes a source of nutrition and a pasture” for these “resourceful foragers,” who “enjoy the shade of the solar panels on hot days, napping and grazing where humans would struggle to reach,” the association notes. “Some of the animals like being petted while they graze,” notes the Journal—adding up to a seemingly ideal workday for these high-in-demand flocks.

The phenomenon brings full circle the use of once arable farmland now occupied by solar panels. From up above, grazing sheep look like fluffy white clouds slowly moving under huge, sleek mirrors. Just like old times, shepherds use dogs to fend off predators and herd the sheep when necessary. They haul in food, pump water, and even set up enclosures for the sheep to sleep in. For those in the business of renewable energy and sheep, “It’s changing all of our lives,” says farmer Ely Valdez.

This blog originally appeared in the Notice & Comment column in the November/December 2022 issue of The Environmental Forum and is republished with permission. Notice & Comment is the editors’ column and represents the signatory’s views.