Recent strategies and policies to phase out coal in China have led to an increase in demand for natural gas. In October 2017, China’s Ministry of Environmental Protection unveiled plans to cut harmful air pollution, especially the particularly damaging fine particulate matter known as PM2.5. The plan, or “Coal Ban,” has set strict targets on air quality levels in addition to a ban on burning coal in 28 of its northern cities, including Beijing. However, while the air quality improved significantly in Beijing this past winter, the rapid ban on coal burning and the transition to natural gas has left thousands without heat.

While there is a great need to reduce carbon dioxide emissions, China’s transition from coal to natural gas has resulted in concerns about implementation. In 2017, Beijing had one million suburban homes transition from coal to electricity for heating, which led to an increase of roughly 10% on Beijing’s power grid maximum load. For example, according to The Diplomat, in the rapid replacement of coal-heating stoves with other, lower-emission methods of heating, there were “cases where local officials have arbitrarily demolished existing systems without first securing new sources of heating,” leaving rural villagers without adequate heating. UCLA School of Law’s Alex Wang further explained that a drawback of these “campaign-style” efforts to reduce air pollution and PM is the potential risk that “policies are implemented in inappropriate, even abusive, ways as local governments clamor to meet political targets.”

Because of this shortage of natural gas, China’s Ministry of Environmental Protection has had to allow coal burning in places where the retrofitting of natural gas heating systems has not been completed. In addition, the increased demand for natural gas has meant that there is more pressure to expand China’s natural gas resources.

Shale Gas as a Solution? 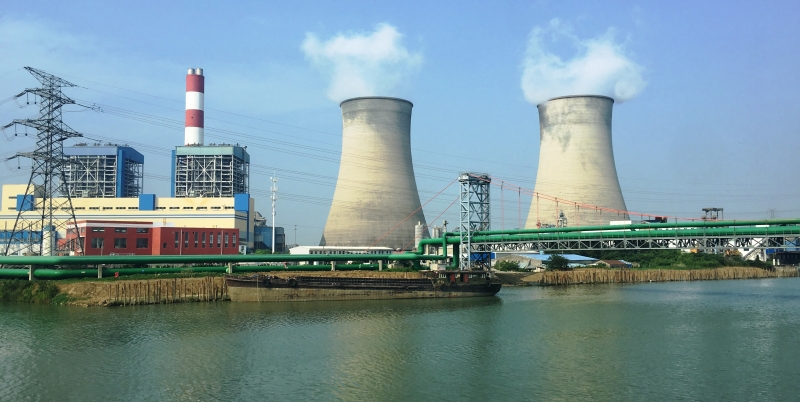 According to the Energy Information Administration, China has found shale gas in seven prospective basins: Sichuan, Tarim, Juggar, Songliao, the Yangtze Platform, Jiangham, and Subei. Its largest shale field, the Fuling field, produced 6 billion cubic meters of shale in 2017—a record high. Chinese oil and gas firm Sinopec says that Chongqing, the largest shale field outside North America, is the primary location for commercial exploitation of shale gas. While shale gas development only began in China in 2009, by 2014, it was the world’s third largest producer. Shale gas demand in China is rapidly growing—the International Energy Agency predicted that the country’s natural gas consumption is set to exceed the demand of the entire European Union by 2035. The Chinese government has plans to reduce greenhouse gas emissions through the substitution of coal with “cleaner burning” natural gas as a primary electricity fuel, such as through the country’s carbon emissions cap-and-trade scheme.

According to Wood Mackenzie consultancy, China is currently on track to double domestic shale gas production to 17 billion cubic meters by 2020, twice the record-breaking 2017 levels. The increase in production will include development of almost 700 new wells at three projects in Southwestern China—PetroChina’s Changning-Weiyuan and Zhaotong, and Sinopec’s Fuling field. However, this projected increase of shale output by 2020 is still less than Beijing’s goal of 30 billion cubic meters by 2020. Despite the country’s abundant shale resources and growing production, in 2017, the country experienced severe natural gas shortages.

Although estimates say that China has the largest technically recoverable shale resources, the shale formations housing the unconventional gas “tend to be deeper, more fractured and located in densely populated mountainous terrains,” which results in drilling complications and higher costs. Most of the country’s shale basins are in remote areas that lack critical pipelines and infrastructure. There are also significant environmental issues with shale gas extraction, such as potential methane leakage, the large volume of water used, and potential for water and air contamination. Furthermore, researchers have cautioned that a majority of China’s shale resources are located in arid regions where the high volume of water used could further deplete the already scarce water supply.

One thing is certain: cleaning up China’s air quality is crucial, but policies need to be carefully developed to ensure that citizens have access to cleaner heating alternatives. The “Coal Ban” is a necessary move in improving air quality, but has led to severe natural gas shortages. And shale gas is no silver bullet, due to both the significant impacts on environmental quality and water resources, and the potential for induced seismicity and methane leakage. Therefore, to truly combat climate change via reduced air pollution, policies should incorporate other types of heating rather than rapidly switching the nation’s dependence on natural gas.