In early June, the U.S. Army Corps of Engineers (the Corps) announced that it is seeking public input on a set of initiatives intended to “modernize the Civil Works Program.” These modernization efforts aim to prioritize various objectives articulated by President Joe Biden’s Assistant Secretary of the Army for Civil Works, Michael Connor, including better serving the needs of disadvantaged communities, improving communications and relationships with stakeholders, and advancing innovative, climate-resilient infrastructure that will protect both communities and ecosystems.

The specific topics on which the Corps currently is seeking feedback—which may be submitted electronically or by e-mail or mail until August 2, 2022—include:

Along with verbal input received during 10 virtual public meetings scheduled for July, the Corps intends to use the public’s written feedback to “inform future decisionmaking” in these critical program areas. While we expect more opportunities for the public to weigh in on these topics during upcoming rulemakings, this opportunity to provide earlier input on the agency’s decisionmaking process is key to helping shape water resources policies that will determine how and where billions of federal dollars are spent in the years to come.

What Are the Principles, Requirements & Guidelines—and Why Do They Matter?

Since the Corps’ original Economic and Environmental Principles and Guidelines for Water and Related Land Resources Implementation Studies (Principles & Guidelines, or P&G) were issued in 1983, the overriding policy consideration for analyzing and approving its water resources investments has been “national economic development” (measured by increase in the net monetary value of the national output of goods and services). This means that for the last half-century, while other benefit types (environmental, social, regional) could be taken into account, the primary objective of most major civil works decisions—including inland flood protection, hurricane risk reduction, hydropower, navigation, and more—has been maximizing economic value. Key decisionmaking tools, including the agency’s benefit-cost analysis methodology for most project feasibility studies, have been designed to elevate benefit and impact types that are easily monetized. This is often to the detriment of values that are much harder to quantify—like resilience, ecosystem benefits, equity, local preferences, and maximizing co-benefits.

In 2007, Congress set in motion a total overhaul of the 1983 P&G and the policy hierarchy it enshrined. That year’s Water Resources Development Act established a new three-part federal objective to replace national economic development by: (1) maximizing sustainable economic development; (2) avoiding the “unwise” use of floodplains and flood-prone areas; and (3) protecting and restoring the functions of natural systems. In 2014, a set of new Principles, Requirements, and Guidelines were published to supersede and replace the 1983 version. The 2014 PR&G set forth six “Guiding Principles” that establish the “overarching concepts” to be promoted through federal water resources investments: healthy and resilient ecosystems; sustainable economic development; avoiding unwise use of floodplains; public safety; a watershed approach to decisionmaking; and environmental justice.

This new PR&G provides that federal water resources investments “as a whole should strive to maximize public benefits, with appropriate consideration of costs. Public benefits encompass environmental, economic, and social goals, include monetary and nonmonetary effects, and allow for the consideration of both quantified and unquantified measures.” In an explicit rejection of the long-standing methodology, the 2014 PR&G clearly states that “no hierarchical relationship exists” among federal environmental, economic, and social goals, and stresses the importance of communicating and assessing the inevitable “trade offs” during the decision process.

Now facing a renewed congressional mandate to implement the PR&G (see WRDA 2020, Sec. 110), the Corps is preparing to adopt “Agency-Specific Procedures” (ASPs) to guide implementation within the agency. According to the Corps, its ASPs will “increase consistency and compatibility in federal decisionmaking”—for example, by enabling a “broader range of long-term costs and benefits” to be analyzed more thoroughly and transparently, strengthening collaboration, and “[i]mproving resilience for dealing with emerging challenges, including climate change.” The ASPs also provide an important opportunity for the Corps to increase project-level compliance with 2016 and 2020 legislation requiring the agency to study natural and nature-based alternative solutions to flood-management problems.

We can expect the new ASPs to spur subsequent updates to myriad water resource project planning procedures and decisionmaking tools that, taken together, will determine how the next generation of Corps-funded water management projects are selected, designed, and operated. If the overarching concepts of the PR&G are to be successfully translated into project-level decisions, the ASPs must establish a clear departure from the status quo and require replacement of entrenched planning practices with new procedures, methodologies, and tools that promote nature-based solutions and enable District staff and nonfederal sponsors to make well-informed decisions based on local environmental, social, and sustainable development goals.

The current request for input presents a rare opportunity for the public to help shape a new policy landscape that, once operationalized across the 45 Corps Districts, will mark a watershed moment in our nation’s water resources decisions. Interested stakeholders should consider maximizing their chances at influencing the new policies by providing input now, before proposed regulations have been released for public review and the cake is already half-baked.

The language of the 2014 PR&G is explicit that no hierarchy exists among its six “overarching concepts,” which include environmental justice. Thus, in theory, the new PR&G have elevated environmental justice to the same level of importance as sustainable economic development. The forthcoming ASPs, as well as other Corps EJ policies, are likely to help determine whether that theory becomes reality.

The EJ provision of the PR&G states that agencies “should ensure” that disproportionate impacts on minority, tribal, and low-income populations are identified, and that agencies implementing the PR&G “should seek solutions that would eliminate or avoid [such] disproportionate adverse effects.” It calls for specific efforts “to provide opportunities for effective public participation” by these communities, and to use evaluation methods that “eliminate any biases and fully display the effects of alternative actions” on affected EJ communities.

The language of the 2014 PR&G does not explicitly call for evaluating the equitable enjoyment of projects’ benefits by EJ communities; however, the Corps (like other federal agencies) has received further EJ guidance from the Biden Administration, including through the Justice40 Initiative. Launched by executive order in January 2021, Justice40 aims to direct 40 percent of the overall benefits of federal climate, clean water, and waste infrastructure investments to disadvantaged communities. The Corps’ interim guidelines for implementing Justice40 and other EJ priorities are outlined in this March 2022 memo, which includes a statement of intent to develop a new approach that “goes beyond ‘doing no harm’ to focus on putting the disadvantaged communities at the front and center of studies.”

To be meaningful, any lofty EJ principles and objectives set forth in the Corps’ national policy language must be translated into concrete, mandatory provisions in the project planning policies and procedures that are implemented on the ground by District-level staff—starting with the forthcoming ASPs. By submitting public input on incorporation of EJ principles into the ASPs, in addition to “modernization” of agency EJ policies more broadly, stakeholders may help increase the chances of concrete actions actually happening.

When and How to Provide Input 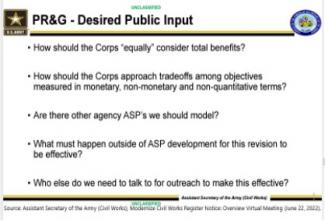 The current request for public input invites any feedback related to the forthcoming ASPs. The Corps has also teed up some specific questions and issues on which input is sought (see graphic for example), which are available as part of the materials from an overview meeting held in June. (Step-by-step tips on how to provide effective verbal and written comments are available from ELI’s Gulf of Mexico team.)

The public has until August 2, 2022, to submit comments in the following ways: