Sea-Level Rise and Climate Migration: The Story of Kiribati

Most people probably haven’t heard of Anote Tong, the former president of Kiribati, but he is somewhat of a celebrity in the international climate sphere. His ideas were radical and often subject to criticism, even within his own nation. Yet, radical action may be the very thing that Kiribati, and so many other island nations, require. 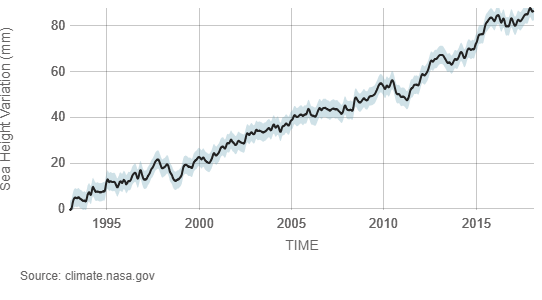 Sea-level rise is particularly distressing for island nations. According to data from NASA, sea level is currently rising at a rate of about 3.2 mm per year and is steadily increasing (see graph). This forecast is extraordinarily dire for nations like Kiribati, a system of islands across the Pacific, the majority of which lie a mere 5-6 feet above sea level. Scientists estimate that Kiribati could be uninhabitable in as little as 30 years, given the current pace of climate change.

One of the many challenges island nations face is the migration of people displaced due to sea-level rise. Under Tong’s leadership, Kiribati purchased 6,000 acres of land in Fiji, about 1,000 miles from Kiribati’s capital of Tarawa. This is meant to be a partial refuge for people living in Kiribati displaced by climate change, as Fiji, a system of mountainous volcanic islands, is far less susceptible to the threat of sea-level rise than Kiribati.

But what about persons forced to move elsewhere? The 1951 Convention Relating to the Status of Refugees grants certain protections for displaced people. But people displaced by climate change are not recognized in international law as “refugees.” However, expanding the definition of “refugee” to include people displaced by climate change may not be the answer. To many, the idea of being labeled a “refugee” and, by extension, a victim, is simply unwelcome. It is therefore paramount that the agency and nationality of people who are displaced due to climate be preserved, particularly in those instances where home nations will entirely disappear.

Toward this end, the government of Kiribati has promoted “migration with dignity” in hopes of preserving the pride and sense of community of those forced to leave their homelands. Migration with dignity, a concept pioneered by Tong, aims to help I-Kiribati plan for the future more methodically. The hope is that by providing them with the tools and skills they need to legally relocate and find work in another country, as opposed to being forced off their land following a catastrophic event, I-Kiribati will be better equipped to land on their feet in their new home country. 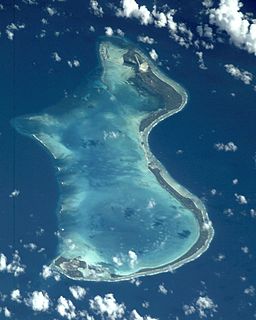 While Kiribati has done a great deal to proactively prepare for the migration of their people, it has not been without conflict. To begin with, this endeavor is very costly. The island paid $7 million to purchase the land on Fiji, over 4% of their annual GDP. Further, while there are many in Kiribati who take the threat of climate change very seriously, others question the necessity of leaving.

In March 2016, Taneti Maamau succeeded Anote Tong as president. President Maamau has signaled his preference to promote infrastructure and resiliency as a counter to sea-level rise. In a stark departure from Tong’s policies, Maamau has said, “We don’t believe that Kiribati will sink like the Titanic ship. Our country, our beautiful lands, are created by the hands of God.” His new administration released a 20-year plan in 2017 that called for reclamation and buildup of the land to bring key areas of Kiribati an additional two meters above sea level. However, the cost of such a program would be quite high—a European Aid agency estimated that the combined costs of mitigation and adaptation measures could amount to 35% of Kiribati’s GDP.

This brings us to the issue of financial responsibility. Despite widely available data showing that island nations are likely to be inundated, the international community has done very little to address potential impacts to the people who call these islands home. Island nations have, for years, pleaded with the international community to provide more resources and support to deal with the threat of rising seas. At the last UNFCCC Conference of the Parties, Fiji, the official host of the Conference (though the meetings were held in Bonn, Germany), brought a great deal of attention to the plight of island communities. But that attention has yet to produce sweeping international action. And sadly, the Trump Administration has pulled U.S. support from the Green Climate Fund, a fund supported by developed nations that disburses money for climate mitigation and adaptation measures in developing nations.

Amidst all of this uncertainty, one thing is absolutely clear: sea levels are rising, and they are doing so more quickly every year. As Anote Tong put it, “Climate change poses the most significant moral challenge to the global community and an existential threat to the future of many communities worldwide.” Kiribati is just one among many island nations facing this threat. The international community will need to step up its provision of resources in order to avoid a migration crisis and ensure that the people forced to relocate are able to do so with dignity.