Perspectives From Our Wetland Heroes: Part 2

Friends of the Detroit River

The Environmental Law Institute (ELI) is pleased to announce the winners of the 31st Annual National Wetlands Awards: Mark Beardsley; John W. Day Jr.; Trinity Favazza; Ted LaGrange; Sam Lovall; and Robert Wade. Together, these awardees have restored, researched, and protected thousands of acres of wetlands nationwide; their examples have inspired many members of their community to act and make a difference to protect and improve these vital natural resources.

ELI will honor these six wetlands champions virtually via a month-long digital campaign throughout May, which is also National Wetlands Month. As part of this campaign, ELI has invited each of our six awardees to contribute, in pairs, their unique perspectives on wetlands protection to a post for ELI’s Vibrant Environment blog. Today’s piece features contributions from John W. Day Jr., winner of the Scientific Research award and Sam Lovall, winner of the Local Stewardship category.

I knew I wanted to be a biologist after taking biology in high school. I entered Louisiana State University in 1963 in the pre-med program, but in a biology curriculum. By my sophomore year, I decided that I wanted to be a biologist and not a medical doctor. I went on to get B.S. and M.S. degrees at LSU, taking a wide variety of science courses especially in the biological sciences. In 1968, I began my Ph.D. in Environmental Sciences and Marine Sciences and studied with Dr. Howard Odum, one of the founders of modern ecology. From Dr. Odum, I learned about the functioning, management, and restoration of coastal ecosystems with emphasis on wetlands from a holistic point of view. In 1971, I returned to LSU as a young faculty member and began a lifetime of studying wetlands.

During the next half-century, I studied a wide variety of wetlands including freshwater, forested wetlands in both inland and coastal locations, coastal marshes, tropical mangrove ecosystems, and riparian wetlands. These studies led to wetland research in U.S., Latin American (principally in Mexico), and Mediterranean wetlands. Much of this work was focused on wetlands of deltas. Working with several colleagues in a variety of deltaic environments, I developed the idea of the role energetic pulsing events (storms, river floods, channel shifts) in the development, sustainability, and functioning of deltas.

Studying wetlands and deltas from a holistic perspective led to a consideration of broader global and society issues and how they impacted natural systems. Over my career, there has been a growing realization of the importance of wetlands while, at the same time, the extent of wetland loss has become very clear. Many of my studies documented both the value of wetlands and the extent of human impacts on them. This is especially evident in the Mississippi and other deltas. Wetlands benefit society in many ways, in terms of natural resource productivity (fisheries, timber, etc.), flood storage, freshwater storage, carbon sequestration, water quality improvement, habitat for many species, and many more. I contributed to the development of valuation of ecosystem goods and services for wetlands. There has been a growing appreciation by the general public of the values of wetlands and I worked in many outreach efforts to educate and work with stakeholders.

For the 21st century and beyond, it will become increasingly necessary to preserve, protect, and restore wetland ecosystems because of the life support services they supply to society. Global climate change is dramatically impacting wetland ecosystems in terms of factors such as sea-level rise, stronger storms, extreme rainfall events, drought and drying, and increasing temperature. Wetlands can play a role in ameliorating the impacts of climate change in terms of flood storage, carbon sequestration, and storm buffering. Society can also make use of climate impacts such as floods to nourish and create wetlands. In coming decades, energy and other resources will likely become scarce and wetlands can provide economically feasible alternatives to expensive technological approaches for such things as storm protection and water quality management. The ongoing restoration of the Mississippi delta and the Detroit River are examples of such restoration. 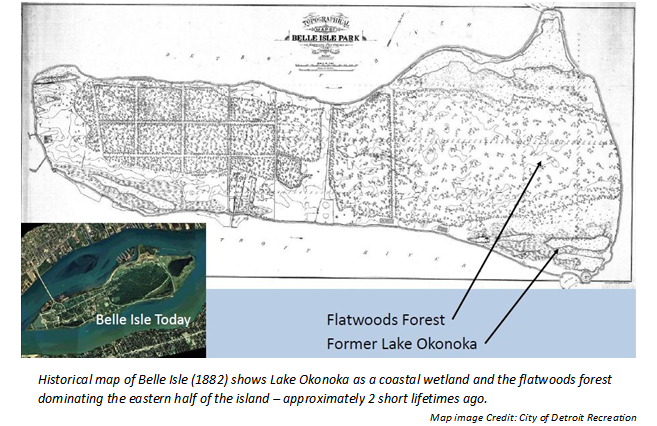 Wetland scientists and ecologists have learned much about restoring coastal shorelines and wetlands from on-the-ground observations—in particular: of coastal development done in the previous century, which was about hardening and exploiting coastal wetland resources for quick monetary gain. This is what happened in the Detroit River, degrading a wealth of fish-spawning beds, which once lined the riverbed for its entire length, and natural areas like Belle Isle’s rare, 200-acre, wet-mesic flatwoods forest—the largest remaining forested wetland of its kind. The forest’s immense assortment of plants having both wet and dry tolerances, growing side by side, produces a smorgasbord for diverse wildlife species. However, roads and paths constructed through and alongside the forest cut off surface drainage patterns, altering the forest’s hydrology and contributing to its decline. Adjacent to the forest, a coastal wetland was dredged and isolated from the river by a perimeter road around the island. The resulting water body, Lake Okonoka, became a stagnant pool infested with Eurasian watermilfoil.

The “old school” way of managing coastal shorelines promoted a decline in green infrastructure, known to be one of our best defenses in mitigating the effects of carbon emissions—the most blamed factor causing climate change. Furthermore, we have observed climate change as an instigator of high-water levels, which are devastating much of the coastal development done in the last century. With these observations, there is a shift in thinking among the scientific community to protect and rebuild our coastal wetlands to slow the effects of climate change and to ward off the anticipated extinction of over one million species over the next decade. This partially explains the importance of the Lake Okonoka restoration project and others completed by the Detroit River Public Advisory Council and its partners. Click here for a brief video summarizing these projects. 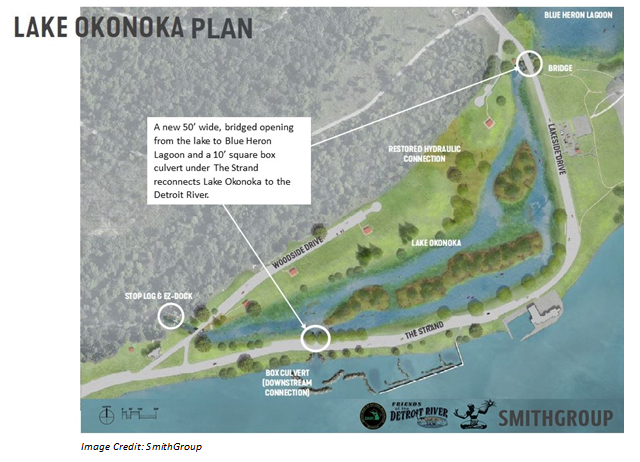 Belle Isle and its flatwoods forest were doing very well for thousands of years before the Isle’s perimeter road was constructed, isolating the south shore’s coastal wetland from the river. Understanding the consequences of not-too-recent, contemporary development and new predictions about climate change, a “newer” philosophy regarding shoreline management has emerged, leading Friends of the Detroit River and its partners to reopen Lake Okonoka to the River. This action will recreate 28 acres of calm backwater for fish spawning and nursery activity and oxygenate the lake. Natural fluctuations in river levels will result in emergent and submergent wetlands around the lake’s perimeter.

Yet, due to the highest and longest-lingering water levels experienced in the Detroit River (or the Great Lakes in general) in recorded history, which are likely caused by “old school” shoreline management strategies, Friends of the Detroit River is working with the Michigan Department of Natural Resources to implement temporary (removable) measures to block river water from entering the lake, to control potential flooding on the island, during this time of unprecedented high water.

Based on decades of collected data, water levels are expected to drop to within a normal range at some point in the future, allowing removal of the temporary water-flow control measures and providing excellent conditions for fish and wildlife habitat, along with recreational activities like kayaking, hiking, fishing, and birding. It is unfortunate that the Lake Okonoka restoration project must prolong history’s mistakes by  implementing temporary water control measures that go against the project goals. This only points out the urgency for continuing worldwide coastal wetland restoration before water elevations climb any higher and the investment to save any important coastal development becomes impossible. If predictions of higher water and further destruction to our coastal development come true, plans for saving this development will likely become popular. If so, these plans should be accompanied with strategies for restoring coastal wetlands as well.