Offshore Wind Development in the United States and Lessons from Denmark

As our global energy demand continues to rise, our dependence on renewable energy sources will inevitably increase as well. The offshore wind industry is a fairly new sector within the energy space. Although the United States is already one of the world’s largest onshore wind energy markets, there remains a substantial amount of growth potential off of our shores. More specifically, studies have found that our shores have the potential to be producing over 2,000 gigawatts (GW) of electricity per year.

Even with the clear promising impacts of offshore wind development in the United States’ exclusive economic zones, there are challenges to fulfilling its potential due to the slow bureaucratic permitting process and the lack of public support for new development projects.

First, the permitting process requires engagement with a variety of agencies and stakeholders. Oversight in federal waters is largely controlled by the Department of Interior’s Bureau of Ocean Energy Management, which  manages developments through the Outer Continental Shelf Renewable Energy Program. Offshore wind projects are also subject to review and consideration under a number of additional federal laws such as the National Historic Preservation Act, the Endangered Species Act, the National Environmental Policy Act, and many other important environmental statutes, all of which are overseen by other agencies. The sheer number of relevant federal statutes and stakeholders slows the bureaucratic permitting process for offshore wind projects.

Another main challenge to the growth of offshore wind resources is the public opposition associated with new projects. The Cape Wind project in Nantucket 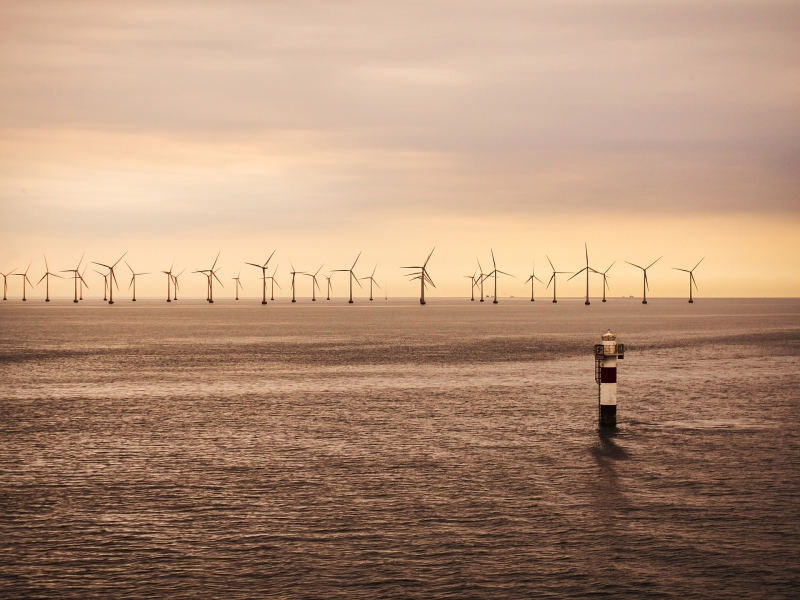 Sound provides one notable example in which there was strong opposition to offshore wind (read a prior blog about it here). After 16 years of planning and litigation, the project was ultimately terminated largely due to hostility from affluent interest groups who opposed the development. One study found that 42.4% of locals were opposed to the project, 24.6% supported it, and another 33% had not yet made a decision. Much of this opposition is rooted in the fact that residents did not understand the benefits of offshore wind and they we worried about large wind turbines blocking their views.

How might the United States go about overcoming these challenges? As of yet, 13 states have put in place policies that include offshore wind in their energy mix, and there are several projects that are in the development phase. However, there is still a lot that policymakers can do to encourage and support the development of offshore projects.

A look at the successful Danish offshore wind industry provides some possible ideas for spurring offshore wind development. In Denmark, which has 13 functional wind farms compared to the United States’ 1, the first offshore wind farm was erected in 1991—25 years before the Block Island Wind Farm was developed in the United States. The American market has a lot to learn from the successes of the Danish strategic energy plans and their ability to generate high levels of public engagement and buy-in for such projects.

After suffering from a series of oil crises in the 1970s, Denmark developed and began implementing a set of four energy plans meant to safeguard the country’s future energy supply. The plans began with early government support for research and development in renewable energy. The most important step in streamlining the expansion of the market was through the creation of the Danish Energy Agency (DEA) in 1997. This allowed for a central national authority to manage the implementation of renewable energy policies. It also simplified the permitting process by creating a one-stop-shop approach, as the DEA is responsible for granting licenses, coordinating with public authorities, engaging with marine spatial planning, and approving new grid connections.

Beyond Denmark’s effective regulatory and institutional framework, offshore wind enjoys high levels of public support. This public engagement is largely due to the early establishment of local wind cooperatives. These cooperatives consist of groups of people who jointly invest in shared wind turbines so that they are able to generate financial returns through the collection of energy. By 1996, roughly 10 years after cooperatives were introduced, over 2,100 cooperatives existed throughout Denmark, which contributed significantly to popular support for wind power. Culturally, Danish citizens are also more attuned to energy efficiency and renewable energy standards than Americans due to Denmark’s significant public engagement in the low-carbon transition. Their national goal is to make Denmark 100% self-reliant on renewable energy by 2050. With such an ambitious goal, all citizens are encouraged to think critically about their energy sources and usage.

The Danish model underscores the important role policy can play in the development of renewable energy projects. Although Denmark’s experiences are very different from those that we have seen in the United States, there is a lot that American policymakers can learn from their successes. To facilitate the deployment of such projects, the United States must build public support, engage relevant stakeholders, and create a streamlined regulatory system. Designing a strategic policy framework will allow the expansion of offshore wind development and the diversification of the energy mix.