"[A] single courageous State may, if its citizens choose, serve as a laboratory; and try novel social and economic experiments without risk to the rest of the country.”

Justice Louis Brandeis wrote those words nearly a century ago, and they are particularly relevant to a set of experiments in environmental regulation now being carried out at the state level. 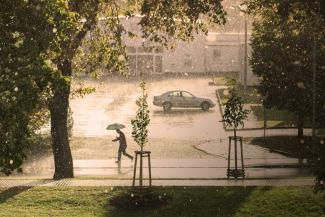 During the 1970s, as regulation of air pollution underwent a period of major development, the process was carried out under a national set of standards and priorities developed by U.S. EPA, which established a common framework for all states. States were responsible for working out their individual pathways to achieving those standards, but EPA was available to determine which level of stringency should apply to which pollutants, and to ensure that the states were meeting those standards.

In contrast, the frameworks now being developed to regulate greenhouse gas emissions in the United States are not being driven by a coordinated national policy. In the absence of a national consensus, the states have been left to develop their own climate policies, with their own requirements and enforcement mechanisms. “Novel social and economic experiments” are under way, and eventually the results will be apparent.

As states chart their own courses, they face one common challenge in reducing greenhouse gas emissions—the sheer number of sources. The sources responsible for emitting the pollutants of most concern during the 1970s were often concentrated in relatively few, large industrial facilities or power plants. In contrast, virtually every building with a heating or cooling system can be a greenhouse gas emission source. Implementing large-scale reductions in greenhouse gas emissions will require action by a large number of entities on an unprecedented scale.

What tools exist to help local governments deal with reducing greenhouse gas emissions from their residents, businesses, and their own operations? Despite the differences between regulation of traditional (criteria) air pollutants and greenhouse gases, one lesson may be useful to local governments. While emissions from many industrial sectors tend to be concentrated in a few large plants, other sectors comprise many small to mid-sized establishments, such as the printing, metal finishing, and healthcare sectors. Instead of bringing numerous enforcement actions against many small businesses in sectors like this, an alternative approach called “compliance assistance” has proven to be a more efficient way to encourage emissions reduction.

Compliance assistance rests on the premise that once environmental regulations have been established, most organizations responsible for emissions will find it in their interest to operate within the rules.

The idea is to remove “compliance friction” and make it as convenient as possible to comply. The first step is to make clear exactly which rules apply to an organization’s operations. Making those regulations accessible, and clearly indicating how they apply to particular sectors—in terms familiar to those working in that sector—is the information component of compliance assistance.

Since the dawn of the internet in the mid-1990s, the National Center for Manufacturing Sciences (NCMS) has partnered with the Office of Enforcement and Compliance Assurance (OECA) of EPA to provide compliance assistance information to a variety of industry sectors. The Compliance Assistance Centers program has developed websites with compliance information specific to 16 different sectors. Local governments are themselves regulated entities—as operators of wastewater treatment plants and vehicle fleets, for example—and have access to a compliance assistance center designed specifically for them: the Local Government Environmental Assistance Network (LGEAN), which NCMS supports in partnership with ELI.

NCMS has recently made a new state locator available, covering state resources related to climate change. The Climate Change State Resource Locator provides to the public in general, and specifically to policymakers or agency staff dealing with climate-related issues, a convenient way to find out what measures states are taking in response to climate change. The Locator contains links to both statewide and state agency-specific plans, and to greenhouse gas inventories and climate action plans prepared by local governments in each state. It differs in one key respect from the other compliance assistance locators: Instead of a guide to established rules, the Locator offers information on what each state is doing to establish the framework under which the rules are being written.

The data set represents an ongoing collection of “lab reports” from the simultaneous social and economic experiments now underway in most states. Local governments now developing or updating local climate action plans can find examples of how the issues are being handled in other locations facing similar challenges through these resources.

NCMS (National Center for Manufacturing Sciences) is a cross-industry technology development consortium, dedicated to improving the competitiveness and strength of the U.S. industrial base. As a member-based organization, it leverages its network of industry, government, and academia partners to develop, demonstrate, and transition innovative technologies efficiently, with less risk and lower cost.