The New Galapagos Islands Reserve: A Shift in Paradigm

Ecuador is undoubtedly one of the most megadiverse countries in the world. It currently has 18,439,141.75 hectares of protected areas, which means that 13.7% of its territory is under special protection. Without underestimating the rest of the ecosystems and habitats that make up this small piece of land located in the middle of the world, the Galapagos Islands usually take the limelight. The Galapagos Islands have been declared a natural world heritage and are the reference by which many foreigners identify the country.

The Enchanted Islands (as they are often called), have been the basis of multiple studies on various topics, and the inspiration for Charles Darwin's theory of evolution, making them a preferred place for researchers and academics. Due to their beauty and the conservation of their ecosystems, they also contribute to the development of tourism in the country, providing those who visit the opportunity for direct encounters with nature.

These singularities have not gone unnoticed by the current government. During COP26, President Guillermo Lasso made a statement demonstrating the government’s clear commitment to the ecological transition of Ecuador, by proposing the creation of a new marine reserve in the Galapagos Islands with an extension of 60,000 km2, which—added to the existing 133,000 km2—comprises a total area of 193,000 km2. This new reserve will be divided as follows: 30,000 km2 of no take zone, located in the Cocos Mountains, toward the Costa Rican border; and 30,000 km2 to the northwest of the Galapagos Marine Reserve, constituting a no long line zone.

The president of the Republic of Ecuador mentioned the possibility of multilateral organizations to support this initiative through a debt swap, with the purpose of transferring the profits to a trust fund to be used for the preservation of these reserves. He also emphasized the importance of optimizing controls with the resources raised through the acquisition of technology and equipment, since it would be useless to declare the new zone without protection. 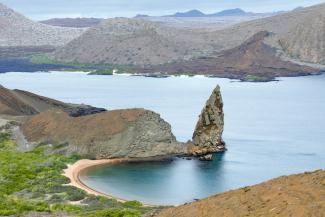 This initiative is very positive, undoubtedly, but it is ultimately burdensome, as Ecuador has a robust fishing sector that maintains a great deal of influence over the country's economy and politics. Thus, limiting the space for the extraction of resources of national fleets could reduce the income received by the State, as well as to the companies and people who depend on these activities. Therefore, the decision adopted unquestionably constitutes a shift of paradigm, where environmental conservation has been weighed against the generation of wealth. This is a dilemma of very difficult resolution, especially considering the strong economic crisis caused by the COVID-19 pandemic still faced by the country.

On the other hand, it is no less true that conservation is not only about limiting, but also securing resources for the industry itself, generating greater benefits in the long term. From this perspective, sustainability, rather than consisting of a bet or position, becomes a prudent and necessary investment, the fruits of which will be enjoyed by generations to come. As Gaylord Nelson, an American politician, noted: “The ultimate test of man's conscience may be his willingness to sacrifice something today for future generations whose words of thanks will not be heard.”

This small South American country contributes only 0.18% of global emissions, nowhere near the top polluting countries. However, with this gesture, it has managed to demonstrate understanding and concern about the environmental problems that affect the entire world. It is an important lesson that it is not necessary to be big or small to contribute to this cause we call planet Earth.