Migration With Dignity: Experiences of Pacific Islanders in Oregon

The COVID-19 pandemic has exposed and exacerbated inequities that lead to differences in health outcomes, particularly for racial and ethnic minority groups. One community that has been particularly affected is the Pacific Islander community in the United States, which has experienced exceedingly high rates of infection, hospitalization, and morbidity. 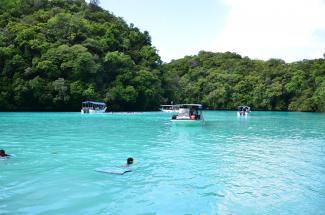 As of March 2022, the Oregon Health Authority reported a hospitalization rate of 8.6% among total cases for Pacific Islanders—the highest among all groups—and a fatality rate of 1.1%. Other states show similarly high numbers. In California, Native Hawaiians and Pacific Islanders have the highest case and death rates among all races and ethnicities. In Hawai’i, Pacific Islanders, who represent 4% of the state’s population, account for 8% of cases and 17% of deaths—by far the greatest imbalance among population groups.

This tragic imbalance is explored in an April 2022 special issue of the Journal of Disaster Research, authored by Scott Drinkall and Kapiolani Micky (Community Health Worker) and Jackie Leung (Executive Director) of the nonprofit Micronesian Islander Community in Salem, Oregon. Since 2018, ELI and MIC have partnered to better understand the experiences, challenges, and opportunities of Micronesians living in Oregon’s Willamette Valley, one of the largest Micronesian communities in the United States.

Environmental migration is especially acute in small island developing states (SIDS)—also more accurately referred to as large ocean states—such as the Marshall Islands and the Federated States of Micronesia. As we know, climate change has major impacts on lives, livelihoods, and human rights. To address these challenges and refocus attention on the migrants themselves, the study examined the migration experience of first-generation Micronesians during the pandemic. This case study contributes to the application of the Migration With Dignity framework developed jointly by Shanna N. McClain, NASA Disasters Program Manager, and Carl Bruch, Director of International Programs at the Environmental Law Institute, in partnership with the International Organization of Migration, the Ocean Policy Research Institute, and Dignity Rights International. To reduce human suffering and promote dignity, this framework emphasizes six key elements: (1) freedom of movement; (2) right to be secure; (3) right of equality; (4) right to a basic quality of life; (5) right to access services; and (6) civil and political rights.

Under the Compacts of Free Association (COFA), citizens from the Federated States of Micronesia, the Republic of the Marshall Islands, and the Republic of Palau can travel to the United States to live and work without restriction. Additionally, the Compacts allow for economic and military provisions for the three countries, including access to certain U.S. domestic programs, such as military protection and the ability to serve in the U.S. Armed Forces. Given the special status of COFA migrants, there is a growing interest among policymakers and researchers to better understand this population, which has often been overlooked.

Our team conducted 40 interviews of first-generation Micronesians to better understand the social dimensions of pandemic response. It is important to note that interview results are not meant to be fully representative of the broader population, but rather to better understand experiences of individuals and the nature of a particular problem. Interview data showed a strong need for additional support for this community, such as improved access to information on COVID-19 vaccine distribution. Efforts to create culturally appropriate materials, such as health information in native languages, help to address the vulnerabilities of immigrant populations, which can be exacerbated under difficult circumstances in times of upheaval. Some of these efforts, undertaken by the Oregon Health Authority, MIC, and many others, have already paid off. As of March 2022, in Oregon, a remarkable 99.9% of Native Hawaiians and Pacific Islanders who are 18 and older are fully vaccinated.

Challenges like the pandemic reinforce the importance of caring for all and ensuring that everyone is treated with dignity. Across racial and ethnic minority groups, social determinants of health, such as economic stability, non-discrimination and equal treatment, access to healthcare, employment, and housing, are known to affect health outcomes. To work toward improved dignity for Micronesian migrants, crucial next steps entail addressing impacts to livelihoods, health and healthcare access, regaining a sense of community, mobility, and language access and accessibility. For more information on the Migration With Dignity framework and associated projects, check out the People Places Planet Podcast episode on Migration With Dignity and our journal article here.