In a recent episode of People Places Planet Podcast, Research Associate Heather Luedke spoke with John R. Nolon, land use law expert and Professor of Law at Elisabeth Haub School of Law at Pace University, to discuss the emerging crisis of “land use climate bubbles.” Land use climate bubbles, which form when property values decline due to climate change impacts, have been popping up across the United States and could lead to an economic crisis worse than the 2008 housing bubble.

Nolon emphasized how local governments can offer the solution to land use climate bubbles. The local land use legal system can leverage state and federal assistance to reduce carbon emissions as a key component of global efforts to manage climate change. In fact, local governments have the legal authority to control approximately 75% of U.S. carbon emissions causing climate change.

According to Nolon, a typical land use climate bubble evolves through multiple stages. Climate change impacts make properties hard to sell for profit or at all. Climate-related damage creates reluctance to finance property sales and new development. After the second or third flood or hurricane, insurance companies step back, property values plummet, and sales slow dramatically.

Spicewood Beach, Texas, presents a stark example of a land use climate bubble. Nolon painted the picture: a real estate broker selling a house arrives with a prospective buyer at the home to find a water truck at the curb, providing a weekly water delivery. The neighborhood is near Lake Travis, and frequent droughts hinder the community’s ability to meet residential water needs; for over one year, water was brought by trucks to Spicewood Beach. Real estate investments in the area rise and fall with the lake’s water level. In the broker’s view, a land use climate bubble was about to pop—home values would soon tank along with the community’s economy.

In New York’s Catskill Mountains, the village of Sidney presents another example. In 2006, Sidney was hit with record storms damaging the business district and residential neighborhoods in floodplain areas. Believing the flood was a 100-year event, the community focused on rebuilding. But five years later, Tropical Storm Lee hit the village, causing widespread damage again. House prices fell drastically, insurance became unavailable, and demand for real estate in flood-prone areas disappeared. A land use climate bubble had popped. Retreat, rather than rebuild, was the most viable option, and downtown buildings and residences were moved to adjacent higher land.

To demonstrate how local leaders are at the center of the land use crisis, Nolon pointed to the intrinsically local nature of climate change impacts. Local governments are the first responders, responsible for rescue and recovery. In addition, the primary responsibility for land use planning is delegated to local governments. Local governments control land use and building construction through zoning, enforce energy codes, create development patterns, and can influence the vegetative environment, all of which directly relate to GHG emissions. In fact, 40% of U.S. carbon emissions come from heating and cooling of buildings, 20% from personal vehicles, while 18% of atmospheric carbon is sequestered by the vegetative environment. Local governments are key to achieving low-carbon land use—for example, mixed-use walkable neighborhoods, with efficient buildings—but they require technical assistance, financial support, and policy guidance. An overlooked yet critically important role for the federal and state governments to play is helping the nation’s 40,000 local governments influence about 75% of carbon emissions.

To avoid or mitigate land use bubbles, local governments can adopt local land use laws to protect the environment. Nolon’s 2003 book, New Ground: The Advent of Local Environmental Law examined how local governments were adopting local natural resource protection laws. Local leaders were perturbed by damage in their local environment and developed local environmental laws in response. Nolon and colleagues built the Gaining Ground Information Database, which compiled local environmental laws, and offered trainings that featured local leaders championing their community’s legal approach. As indicated by diffusion theory, leaders adopt practices from peers in similar communities. Through these various tools, Nolon realized the opportunity to speed up this adoption process.

In considering the private market’s role in reforming land use policy, Nolon underscored recent discussion surrounding Environmental, Social, and Governance (ESG) objectives in business decisionmaking. Sustainable Jersey is a model program for encouraging municipalities to adopt sustainability initiatives, including land use reforms to prevent land use climate bubbles. The program is financially supported by private-sector industries, including large retailers, health insurance companies, and energy enterprises, which all have a stake in the issue. Local governments have demonstrated interest in collaborating with the private sector and have realized business leaders can lead land use change. 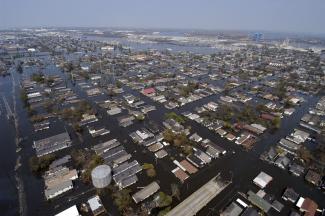 In closing, Nolon called on listeners to get involved. Local leaders, stakeholders, and educators are key actors in local climate change mitigation and creating resilient communities. For members of the public concerned by rising land use climate bubbles, Nolon suggested researching strategies, learning what neighboring communities are doing, and getting involved to be a champion in the local fight to prevent “bubble trouble.”

John Nolon's Choosing to Succeed: Land Use Law & Climate Control discusses local governments’ influential role in responding to land use climate bubbles. The book highlights numerous opportunities for local governments to use their authority to plan for and mitigate the consequences of climate change.

To learn more, listen to the episode, “Bubble Trouble,” of the People Places Planet Podcast, the official podcast of ELI. You can find recent episodes by visiting https://www.eli.org/podcasts or listening wherever you get your podcasts.