Welcome to our new ELI Blog: Vibrant Environment. I hope that through this blog we will find ourselves talking both to long-time friends and partners as well as new readers. ELI is a big tent, and we are pleased to invite you into our community. With this blog, we hope to transcend what might often be our typical audience of environmental lawyers and practitioners and communicate about the important work that we are doing conversationally. The blog will provide a platform for ELI staff to comment on current events and projects. We hope it will allow readers to get a sense of ELI perspectives and discover what’s going on behind the scenes. Readers will also learn about key findings from our research projects and read about ELI events, publications, and programs. We look forward to hearing from you and invite you to share your comments and spark discussion through this platform. 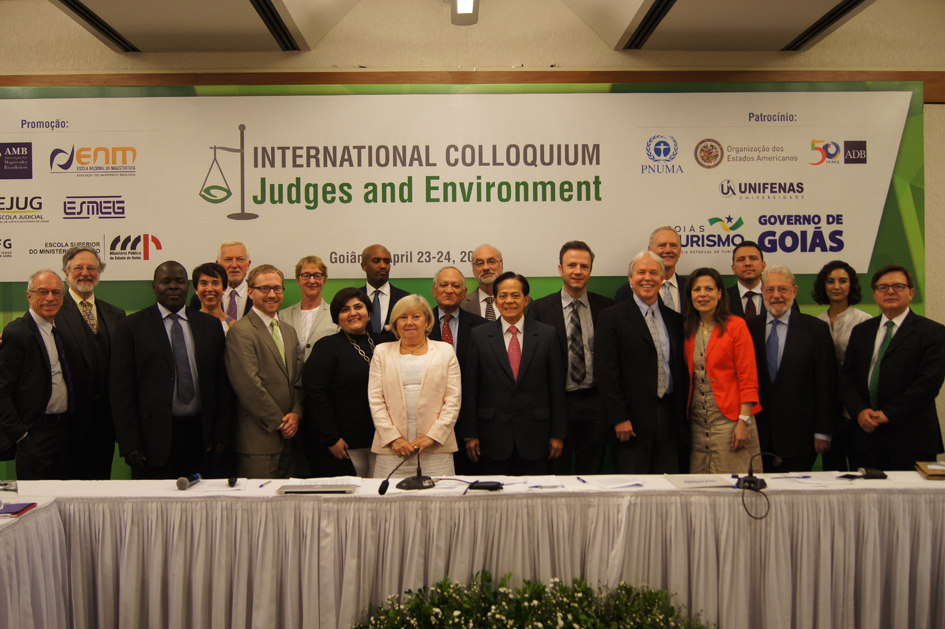 I’ll start our new blog with thoughts from my work in Rio de Janeiro at the end of last month.

It was my second time in Brazil. I was first there in 2012 when I was EPA General Counsel, representing the U.S. government at the big Rio +20 sustainability conference. Rio is said to be one of the most beautiful cities in the world, and for good cause. With its combination of urban beaches—almost all of which are open to the public and therefore serve as a natural city center—and its dramatic intersection of mountain and sea, it really is breathtaking. Add a warm climate, both weather-wise and people-wise, and it’s a tough package to beat.

I wondered, upon return, what Rio would be like in 2016. Brazil has been in the news a lot lately, both because of the Zika virus and because of the Pres. Dilma Rousseff impeachment proceedings. None of this strife was particularly evident in the streets of Rio de Janeiro or in the circles I traveled. Brazilians talked about these things if asked (although seemingly embarrassed by all the hubbub), but, other than the scent of insect repellents that hung in the air, there were few outward signs that anything was amiss. Indeed, the most obvious signs of change were the infrastructure improvements that were underway (a new tram line and the like) in the run up to the 2016 Summer Olympics.

ELI at the World Congress on Environmental Rule of Law

This time around, during my second trip to Rio, I represented ELI at the World Congress on Environmental Rule of Law during the week of April 25, 2016. There were several of us there from ELI (Jay Pendergrass; Carl Bruch; and Talia Fox, who stepped away from her vacation in Brazil to help us out—thanks, Talia!). We were wearing multiple hats—ambassadors for ELI, Secretariat of the International Network for Environmental Compliance and Enforcement, and fulfilling other roles relative to the United Nations Environment Program and the World Conservation Union, the organizers behind the Congress.

The event brought together judges, attorneys general, and other stakeholders from legal communities around the world to talk about strengthening the rule of law in the environmental sphere.

My trip began in Goiânia, Brazil, a few days before the main program. I joined a smaller gathering of judges, former judges, and legal experts (including Prof. Nick Robinson, ELI Board Member and a long-time proponent of an institute of this kind), who were pulled together to develop a charter for a new Global Judicial Institute for the Environment—an institute of “judges for judges” designed to build capacity within the judiciary around the world for environmental adjudication.

The Judicial Institute is an exciting opportunity to continue the work that ELI has been doing since 1990 on judicial training. Judges are key to ensuring effective implementation of environmental laws. How they deal with environmental cases—the importance they attach to such cases, and the seriousness and consistency of their judgments—is fundamental to rule of law formation in the environmental sphere. And, because the courts provide a check on the executive branch of government, judges represent a vehicle for change when other organs of government fail to discharge their duties relative to the environment.

The highlights for me from this World Congress event were the successful launching of the Global Judicial Institute—announced on closing day of the World Congress—and the opportunity for ELI’s Talia Fox to present perspectives from a “Global Meeting of Early Career Members” to the plenary gathering of the whole conference. This was a great moment for Talia and for ELI—she did us proud.

So, the World Congress on Environmental Rule of Law was an important event and moment in environmental law. I felt privileged to be there on behalf of the ELI community, and, upon my return home, further inspired to continue our work together.