How a “Space Station” Turned the Tide on Ocean Policy

When it comes to the climate crisis, some say we can innovate our way out. In his 1989 essay The End of Nature, the writer Bill McKibben mused: “We may well be able to create a world that can support our numbers and our habits, but it will be an artificial world — a space station.”

McKibben may not have been too far off. In 1991, eight brave souls, donning Star Trek-esque blue spacesuits, entered an air-locked glass dome to live in a “space station” version of Earth. Biosphere 2 (modeling after Biosphere 1, Earth), was a two-year experiment located in Oracle, Arizona, containing three thousand species of plants and animals, as well as an artificial rain forest, ocean, savanna, marsh, desert, and agricultural zone.

The idea was dreamed up by a theatrical performance group that wanted to change the world. Edward Bass, heir to a Texas family oil fortune, joined the team and funded the $200 million needed to construct the massive facility. Their goal? Replicate life on Earth from scratch, in case we need to colonize Mars. 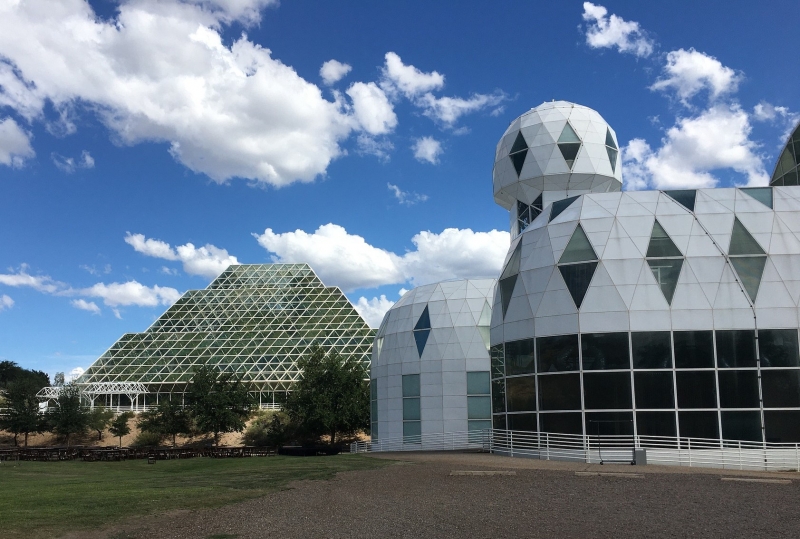 If imitation is the sincerest form of flattery, Planet Earth must have felt both honored and incredibly amused. In an article for Dartmouth Alumni Magazine adapted from his book on the experience, Mark Nelson, one of the original inhabitants of Biosphere 2, noted the group faced “healthy starvation.” Struggling to raise enough food, Biosphere 2 members subsisted mostly off of sweet potatoes. As the orange hue in their complexions grew, so did the public’s alarm.

Oxygen supply became a problem, plummeting to levels found at 15,000-feet elevation and inducing altitude sickness. Ecosystems careened off course, with too many carbon dioxide-producing microbes, and too few pollinating hummingbirds and bees. Household cockroaches and ants ran rampant.

The environment wasn’t the only thing off-kilter. The team developed what Nelson describes as “irrational antagonism,” and reported instances of members spitting at each other.

The group survived for two years inside, though not without a bit of help. Oxygen was pumped in, supplies were delivered, and one member was shuttled to a hospital for a finger injury. The experiment eventually dissolved over disagreements about management.

Today, Biosphere 2 serves as a tourism destination and research center. The facility has enabled significant findings on the impacts of climate change on tropical forests and microbial development.

In fact, when it comes to major ocean policies and discoveries, it may be the “failed” Biosphere 2 experiment that we have to thank. Studies conducted in the complex’s artificial ocean helped scientists understand the process of ocean acidification, when an excess of carbon dioxide reduces the availability of calcium carbonate. Without these minerals, the shells and skeletons of calcifying organisms dissolve. Coral reefs disappear, along with the millions of species that live in them.

Skeptics initially disregarded the findings due to Biosphere 2’s poor reputation, but eventually the scientific — and policy — community came around. In 2009, Congress passed the Federal Ocean Acidification Research and Monitoring Act, which created an Interagency Working Group on Ocean Acidification. The Center for Biological Diversity has long campaigned for EPA to address the issue under the Clean Water Act, but policymakers need to figure out how to measure acidification, and reconcile local impacts caused by a global problem.

Nelson proclaims, “Problems humans cause can also be solved by humans.” Whether or not you agree may depend on a close look at the story of Biosphere 2.

This blog originally appeared in the March/April 2021 issue of The Environmental Forum and is republished with permission.