How Environmental Racism Translates to COVID-19 Vulnerability in D.C.

The COVID-19 pandemic is bringing to light many intersectional divides in the United States that mainstream society can no longer ignore. Lovinia Reynold’s blog last week looked at how environmental racism is linked to higher COVID-19 mortality rates among Black communities. Her piece draws attention to the deep interlinkages between environmental governance and health outcomes and lends further support to the notion that the environmental movement must support racial, health, and economic justice for all, not just for the white and wealthy. The intersection of these issues is playing out dramatically in Washington, D.C., where the percentage and proportion of Black mortalities due to COVID-19 is leading the nation (you can view daily updates from the D.C. government here.) 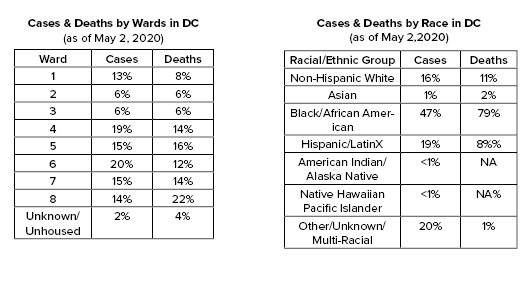 Black residents in D.C. experience disproportionate rates of health challenges and COVID-19 comorbidities such as obesity, heart disease, diabetes, respiratory illness, cancer, and more. This disparity is likely due to the same health, environmental, and socio-political factors that have led to the disenfranchisement of Black and Brown communities across our nation’s capital. 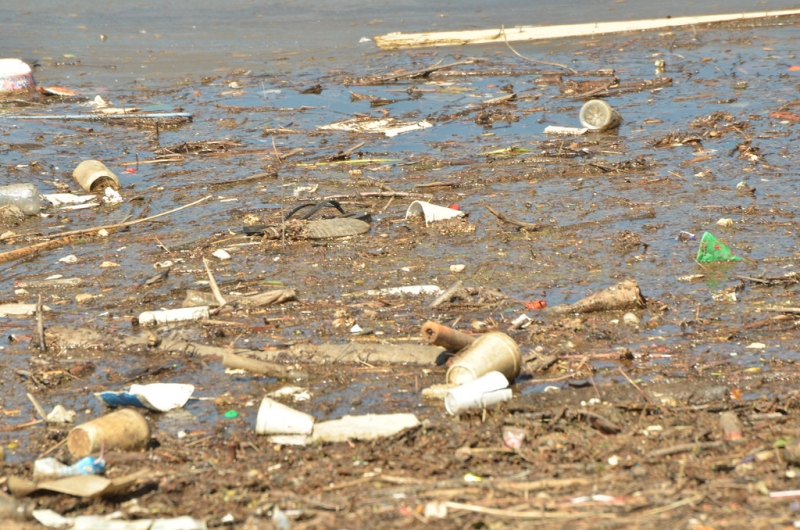 The District’s environmental health threats are concentrated in areas that surround the Anacostia River, which runs through historically Black communities in the southeastern quadrant of the city. For more than 140 years, the Anacostia has been one of the most polluted rivers in the United States, as it was treated as a “dumping ground for industry and residents alike.” As recently as 2016, half a billion gallons of raw sewage were dumped into the river every year, polluting the Anacostia with discharges containing bacteria a thousand times more toxic than public health standards allow. While it is difficult to isolate what health impacts this may have had on surrounding communities, a 2016 report confirmed the continued presence of carcinogens, including polynuclear aromatic hydrocarbons, as well as other substances harmful to humans like pesticides, lead, and mercury.

The District also suffers from geographical inequities, as illustrated by the location of trash transfer stations, where solid waste is delivered, sorted, and then transported to incinerators or disposal sites. The majority Black eastern half of the city houses every single one of D.C.’s waste transfer sites, while the overwhelmingly white western half has none, despite producing more waste. In addition to its unpleasant and potentially harmful social effects, living or working near waste disposal sites poses a number of negative health impacts, including respiratory problems due to breathing in toxins.

Unsafe and unhealthy housing conditions also contribute to the disproportionately large number of children who suffer from asthma in D.C. In fact, children from Ward 8 in southwest D.C. visit the emergency room 20-25 times more often than children living in wealthier wards of the northwest. Between 2013 and 2018, 41 families living in city-inspected, subsidized housing confirmed that their homes contained elevated levels of lead, which can impair children’s neurological and cognitive functions, thereby burdening some of D.C.’s most vulnerable residents with additional disadvantages and challenges. And this does not even include impacts from elevated lead content in water, which the District has been battling since 2002.

To understand how these various factors play out, consider the story of the Buzzard Point community in D.C.’s Ward 6. The majority low-income, Black community is located near a cement plant and a power station, both of which contribute to the area’s poor air quality. Much of the housing in Buzzard Point also poses health threats, as it do not provide central ventilation, allowing toxins and dust to seep into homes. Then, in 2015, the city approved plans for a new soccer stadium in Buzzard Point, further contributing to increased exposure to particulate matter due to construction. The decision also threatened to displace low- and middle-income residents from their homes. Given the seriousness of these health impacts, the community formed the Near Buzzard Point Resilient Action Committee. The committee has partnered with groups to conduct research on the environmental hazards and health outcomes of community members. So far, studies reveal that residents under age 18 suffer from asthma 1.5 times more often than the rest of southwest D.C. Assessments have also shown higher rates of heart disease and cancer as compared to surrounding communities. Sadly, an astonishing 20% of the community is uninsured. While no specific data has yet been generated about COVID-19 impacts in Buzzard Point specifically, we know that Ward 6 has been one of the hardest hit.

What can be offered to communities like Buzzard Point as the nation fumbles forward in its attempt to deal with COVID-19? It may take time to divorce clean water, land, and air from income and race, but there is a lot that D.C. can do in this moment to ensure that its most vulnerable residents are better protected, especially when the city’s economic development has come largely at their expense. This pandemic should serve as a reminder to us all that we are only as healthy as our environment, and that environmental justice requires a more holistic and inclusive approach.