Rice is a primary food source for more than half of the world’s population—especially in Asia, Africa, and Latin America. In China, the rice-consuming culture I’m most familiar with, rice is breakfast, lunch, dinner, and dessert. Even the Chinese character for “cooked rice” simultaneously means “food.” Rice is security, sustenance, and life itself. 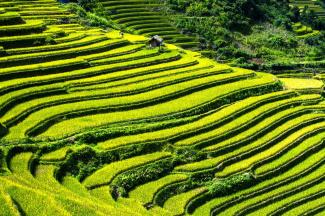 It’s also one of the crops most vulnerable to climate change. A 2018 study led by Chunwu Zhu revealed that higher atmospheric carbon dioxide levels cause a decrease in nutrient levels of rice. The researchers found that at levels of about 580 parts per million, several B vitamins—crucial for bodily functions like nervous system regulation, metabolism, and immune response—decreased by 13 to 30 percent. Protein declined by an average of 10 percent; iron by 8 percent; and zinc by 5 percent. “Everything is becoming more like junk food,” David Wallace-Wells writes of this phenomenon in The Uninhabitable Earth.

How does this happen, given that carbon dioxide, the key input for photosynthesis, theoretically should promote more plant growth? It turns out that more plant mass isn’t always a good thing. While carbon dioxide does stimulate carbohydrate production, it doesn’t do the same for nutrients. The result is “a dilution effect of the nutrients in the grains,” says biologist Lisa Ainsworth, as reported by the UN Environment Programme.

“Acting just through that single crop, rice, carbon emissions could imperil the health of 600 million people,” Wallace-Wells reports. It’s a dire problem deserving of more attention. Already, millions of people are food-insecure. Two billion “have deficiencies of important micronutrients such as iron, iodine and zinc,” writes one of the study authors Kristie Ebi in The Conversation. These nutritional climate effects will only intensify existing health burdens.

They are also not the only risks to rice production. Rising temperatures, increased flooding, saltwater intrusion, and drought all reduce yields of the staple food. Moreover, a 2021 study in Science of the Total Environment found that higher temperatures increase rice’s uptake of arsenic, a toxic metal.

Just to complicate the issue even more, rice is actually itself a source of the potent greenhouse gas methane. While alleviating climate risks to rice, we also need to consider practices like alternate wetting and drying of rice fields to mitigate these emissions.

In response to these many challenges, Ebi calls for investments in further research to better understand the effects of climate change on rice and nutrition. Plant breeding for resiliency, genetic modification, and nutritional supplements are additional ways to address the issue. Still others have called for water-saving techniques to cope with drought.

Meanwhile, carbon emissions continue to shoot up—reaching a record high of 421 parts per million in May—as we burn ever-increasing amounts of fossil fuels. Debates on carbon-capture technologies aside, many of the changes we’ve brought on to the world’s most important staple food are irreversible. As the Chinese proverb goes, the rice has already been cooked. Actions taken cannot be undone.

This blog originally appeared in the Notice & Comment column in the July/August 2022 issue of The Environmental Forum and is republished with permission. Notice & Comment is the editors’ column and represents the signatory’s views.