Managed retreat is deemed by most as a viable adaptation option to climate-related extreme weather events. Yet, the practice is controversial due to the negative impacts it can have on marginalized communities. Approaches to managed retreat must balance the need for moving communities away from the hazardous impacts of extreme weather events with the prioritization of transparent processes that engage community members and incorporate environmental justice considerations. 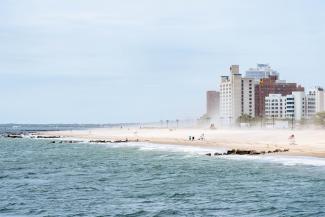 Managed retreat is the coordinated and purposeful movement of people and communities away from vulnerable and hazardous areas. As climate-related disasters increase in intensity and frequency, communities and governments are increasingly evaluating managed retreat as a component of their adaptation strategies. Yet it is also highly controversial. Managed retreat has the potential for abuse and displacement of marginalized communities, especially as it is increasingly considered an adaptation option for coastal communities. There are social and psychological challenges in displacing people from their homes. Furthermore, managed retreat can be impacted by issues like affordable housing, wealth inequality, access to livelihoods,  and power dynamics. For example, surveys in Australia show that opposition to moving increases when the housing market drops, especially for indebted homeowners. Furthermore, research has shown that previously redlined neighborhoods are more likely to live in flood-prone areas, a legacy of historic housing discrimination.

Though it does not use the terminology of managed retreat, the U.S. government has been relocating residents for years through post-storm property buyout programs. The Federal Emergency Management Agency (FEMA) has funded more than 43,000 voluntary buyouts of flood-prone properties in the United States. But these voluntary buyouts programs come with their own challenges. Studies point to the way histories of discrimination intersect with managed retreat plans. The results of one analysis showed that buyouts can encourage disinvestment in housing stock and white flight in areas where buyout participants relocate.

At the same time, there are some communities that desire buyouts—that are done with respect. But some of the biggest challenges facing managed retreat are the time and cost required for moving entire communities. Isle de Jean Charles, a strip of land southwest of New Orleans, has lobbied for 20 years to gain relocation funds. Similarly, the village of Newtok, Alaska, has needed 25 years to put together the funds to relocate just its first batch of residents.

Another locale, Princeville, North Carolina, demonstrates the way historical connection to land can shape relocation. Princeville, the oldest town chartered by Black peoples in the United States, has had to balance its historical significance with the dangers presented by repeated flooding. Though the government has offered widespread buyouts, residents and town officials have understandably been reluctant to accept. The town has a strong history of self-determination in the face of the flooding, and has repeatedly chosen to rebuild with resilience considerations, relocate critical services, and formulate strategic plans for town relocation without abandoning historical and cultural sites (although there have also been a number of buyouts in Princeville).

Ultimately, the social and environmental justice issues that face managed retreat demonstrate the need for transparent and equitable processes, self-determination, and careful consideration of the historical and systemic issues that have impacted communities. Taking these issues into consideration will help facilitate a more just and equitable approach to managed retreat.