The Environmental Argument for Less Meat in Your Diet

Just over a half-century ago, Diet for a Small Planet, Frances Moore Lappé’s surprise best seller, exposed the harms of animal agriculture to a wide audience in the same way that Rachel Carson’s book of a decade earlier, Silent Spring, put to widespread shame the practice of applying pesticides to cropland. The title of Moore Lappé’s book encapsulates her thesis. The math in 1971 made a compelling case that abandoning meat is indeed necessary to avoid crossing planetary boundaries. 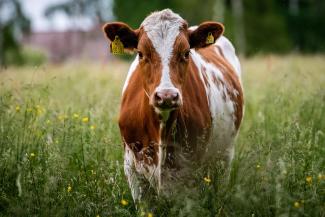 And we have up-to-date figures that confirm her conclusions. As revealed in a Sidebar to be published in our next issue, by Harvard’s Sparsha Saha, “Animal agriculture uses 83 percent of all available farmland on the entire planet . . .yet it produces just 18 percent of our calories and 37 percent of our protein.” The numbers are from a 2018 article by Oxford University’s Joseph Poore and Thomas Nemecek published in Science. Their report takes a comprehensive look at the world’s food system.

The scholars conclude that meat farming produces a majority of agriculture’s harmful climate effects. Indeed, as Poore and Nemecek state, “Converting grass into [meat] is like converting coal to energy. It comes with an immense cost in emissions.” Avoiding animal products entirely could reduce an individual’s effect on the climate system from growing food by 73 percent.

In reporting on this research, The Independent concluded that cutting out meat and dairy “is probably the single biggest way to reduce your impact on planet Earth, not just greenhouse gases, but global acidification, eutrophication, land use, and water use.”

Poore believes a labeling system can drive consumer behavior toward less meat. “The problem is, you can’t just put environmental labels on a handful of foods and look to see if there is some effect on purchasing,” he says. “Consumers take time to become aware of things, and then even more to act on them. Furthermore, the labels probably need to be in combination with taxes and subsidies.” He is still positive on the concept: “My view is that communicating information to consumers could tip the entire food system toward sustainability and accountability.”

In that regard, a bar chart published at ourworldindata.org highlights the problems of growing meat. It portrays the greenhouse gas emissions per unit of food type sorted by product weight. The conclusion is obvious: with a few minor exceptions, animal protein is more climate affecting than is protein derived from vegetable sources.

Beef is literally off the chart, more than twice the emissions per kilogram of product than the next highest food source. Indeed, beef has 40 times the climate impact per kilogram as does rice, and almost all other animal foods show a smaller but still substantial discrepancy. This is in addition to other resources that it takes to raise animals, including over 450 gallons of water to produce every McDonald’s Quarterpounder.

According to Poore and Nemecek, if humanity gave up animal agriculture, “Global farmland use could be reduced by 75 percent, an area equivalent to the size of the U.S., China, Australia, and the EU combined.” In other words, The Independent concludes in reviewing their research, “Not only would this result in a significant drop in greenhouse gas emissions, it would also free up wild land lost to agriculture, one of the primary causes for mass wildlife extinction.”

Even Consumer Reports is making the case for eating less meat and dairy. It reports on a Nature Food article that calculates “the way we grow, transport, and consume food accounts for about a third of the planet-heating gases created by humans, with animal-based foods causing twice as much as plant-based ones.” The magazine notes that “beef alone accounts for roughly half the emissions linked to U.S. diets but provides just 3 percent of the calories.”

Beef comes up once again in research out of Johns Hopkins University showing that plant-based fake meats have a “carbon footprint about 90 percent smaller than beef’s,” according to the magazine. “On the other hand, they are “1.6 to 7 times more energy-intensive then tofu, peas, or other less processed plant proteins.”

Every little bit helps. You can reduce the amount of meat in your diet as a first step—smaller portions or meatless days. You can make meat a side dish instead of the main course. You can make vegetable combos with morsels of meat in a supporting role. If you are looking for recipes, Diet for a Small Planet has several nourishing dishes in the meals it presents, although it is not the latest word on the input ratios in a healthy diet.

All environmental professionals should be aware that the latest data on the harms of animal agriculture are clear and compelling. Meaningful actions in response are simple—and delicious.

This blog originally appeared in the Notice & Comment column in the July/August 2022 issue of The Environmental Forum and is republished with permission. Notice & Comment is the editors’ column and represents the signatory’s views.