A Down Payment on Climate Change

When I last sat down to write this column, the Supreme Court had just issued its 6-3 decision in West Virginia v. EPA. As I said at the time, it was disheartening, and many in the environmental law field were assessing how to bounce back from its potential effects limiting agency action. Fast-forward two months, and while the concerns raised by that case aren’t gone, we’ve spun in the other direction. Now, I’m sitting at my computer pondering how to succinctly capture the largely climate-focused initiatives newly enshrined in the Inflation Reduction Act—which, together with last year’s bipartisan Infrastructure Investment and Jobs Act, constitutes the most important environmental legislation in years. 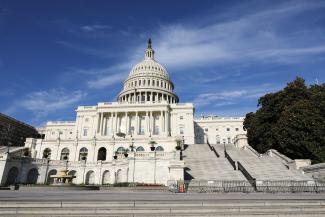 The IRA has created buzz, as the core of its provisions are programs to support climate and energy action. Does it cover everything? Of course not. Does it have less than desirable provisions? Of course. Is it enough funding? I’ve yet to encounter a circumstance where the answer to that question is “yes,” and here is no different. But it is the largest influx of climate spending seen to date, and, especially in tandem with the dollars flowing from the Infrastructure Law, that is exciting. Not only because of the dedicated spending they provide, but also the effect it will have across industries.

The IRA passed as a budget reconciliation bill designed to generate over $700 billion in revenue, primarily through a 15 percent corporate minimum tax, prescription drug pricing reform, a 1 percent fee on stock buybacks, and IRS tax enforcement support. In the vicinity of $300 billion of this revenue will go to deficit reduction. And $369 billion will go toward addressing energy security, climate change, and the like.

The majority of the IRA’s energy and climate provisions come in the form of subsidies and direct payments. Various aspects complement or build upon funding provided under the Infrastructure Law and are focused on supporting climate change mitigation, resilience, and adaptation efforts. Examples range from increasing renewable energy production to greater support for lower-income household efficiency and resilience improvements, and from funding for fenceline air quality monitoring to electric vehicle tax credits.

In short, the IRA takes an all-of-the-above approach to spurring climate action. Forecasts say the package puts the United States on a path toward reducing emissions 40 percent below 2005 levels by 2030. And in sight is the goal of a 50-52 percent reduction—which is our Nationally Determined Contribution under the Paris Agreement. Key to its success, though, will be the way agencies structure and distribute these funds to maximize environmental and social impacts.

One of the most meaningful aspects of this spending is that, just as with the Infrastructure Law, the IRA’s climate and energy spending falls within the ambit of Justice40—the goal, set by President Biden’s Executive Order 14008, that 40 percent of the overall benefits of certain federal investments (including in climate, clean energy, and water infrastructure) go to communities that have been marginalized, underserved, and overburdened by pollution.

Agencies are currently working under interim guidance and developing strategies for implementing Justice40. This is by no means simple to effectively and efficiently execute, especially given the complexity of much federal funding that goes through an additional layer of state disbursement. Nonetheless, it is critically important that we realize Justice40’s promise, if society is going to make progress in repairing the imbalance and injustice seen in the distribution of environmental harms and benefits.

Part of the discussion of the “major questions doctrine” raised in the West Virginia v. EPA majority opinion focused on the idea that issues of massive economic significance should be addressed in the first instance by Congress, not by agencies—see the Debate on the doctrine starting on page 50.

On the one hand, in the wake of that decision, a litany of questions remain about where the weight of decisionmaking lies, and what authorities governments at all levels have to address climate change on needed timelines. On the other hand, when you look at the IRA and the Infrastructure Law cumulatively, over the last year Congress has directed close to a trillion dollars that supports climate, energy, and environmental action.

We know more will be needed, because addressing the challenges before us requires transformative change across virtually every aspect of our daily lives. But this is a powerful step forward. So we take it.

This blog originally appeared in the Notice & Comment column in the November/December 2022 issue of The Environmental Forum and is republished with permission.