The courts have a lot of friends. How many of them care about the climate?

As the national conversation following the West Virginia v. Environmental Protection Agency (EPA) verdict showed, climate change continues to be a focal point of this generation. And that conversation is happening both inside and outside the courtroom in the form of amicus briefs. Thirty-three amicus curiae, or “friend of the court” briefs, were filed for West Virginia v. EPA after it reached the Supreme Court, adding to the 20 briefs previously filed and bringing the total to 53 submitted. Amicus briefs come from ​​individuals, organizations, or a combination of both, and allow those not directly involved in a case, but likely have a vested interest in the outcome, to provide additional information or add a new perspective. And although they must be filed by an admitted attorney, amicus briefs can by and large be submitted by any individual or any entity. 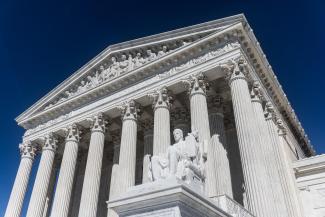 According to Anthony J. Franze and R. Reeves Anderson of The National Law Journal, over the last 10 Supreme Court terms, more than 8,000 amicus briefs were filed,  potentially affecting the outcome of 96% of all argued cases. Therefore, researching how they are used in particular instances is critical to better understanding if and how they factor into the courts’ decision-making. More specifically, as climate change cases continue to populate court dockets and shape national climate legislation, a crucial question remains: are amicus briefs submitted by climate scientists used in climate change-related court cases? If so, when, and how? This blog aims to shed some light on those questions. Primarily drawn from the Sabin Center’s Climate Change Litigation Database, the following information about climate scientists’ amicus briefs can help illuminate how these briefs impact their respective court decisions.

Nearly all 23 briefs were submitted by climate scientists, academics, or organizations made up of scientists such as the Union of Concerned Scientists or the Center for Climate Integrity. The briefs had a wide range in terms of numbers of contributors, ranging from as few as one author to as many as 18. Interestingly, across all examined cases, just one of the climate amicus briefs was cited in the ultimate court opinion, and that was in a dissent. However, six cases are still being deliberated.

“If the current rate of emissions continues, children born this year could live to see parts of the Eastern seaboard swallowed by the ocean,” Justice Kagan wrote, attributing this information to the amicus brief written by Oppenheimer, et al.

In a case before the Ninth Circuit, City of Oakland v. BP p.l.c., the six aforementioned individuals and two organizations highlighted three key points to support the City of Oakland. The first is that the defendants (BP p.l.c, Chevron Corporation, ConocoPhillips, ExxonMobil Corporation, and Royal Dutch Shell p.l.c.) knew of the risks of harm associated with their products. They understood that their products’ fossil fuel emissions were increasing atmospheric carbon dioxide levels. The brief also stated the defendants publicly discredited climate change science, despite their knowledge of its potential harms. They sowed seeds of doubt in the public by downplaying the scientific consensus about global warming and the risks associated with it. And the authors note the defendants protected their own assets from climate change threats they publicly discredited. Consideration of climate change and its effects played a role in the implementation of defendants' upcoming projects.

The group submitted variations of this amicus brief in all six of their cases, although one of the briefs did not include the Union of Concerned Scientists as an author. All of the cases involved actors from the oil and gas industry, and these briefs provided a scientific and academic perspective on the cases through the lens of climate change. None of these briefs were cited in the final verdicts, although two cases are still being deliberated.

Are amicus briefs making a difference in court rulings that involve climate change? Of the cases identified, one brief across the 12 decided cases cited a climate science-related amicus brief in its ruling. Its inclusion was primarily fact-based and centered around the dangers of climate change to communities and the planet. It remains to be seen if and how the percentage of cases that rely on these briefs will change as the six pending cases reach conclusions.

It is important to remember, however, that even if a brief wasn’t cited, the views expressed in them still reach the judges and the public. Climate scientists and academics submitting these briefs have played, and will continue to play, a valuable role in the judicial system.