Alicia Mozian, recipient of the 2017 National Wetlands Community Leader Award, retired in October after 35 years of dedication to environmental sustainability in Connecticut. Mozian served over two decades as the Conservation Department Director of Westport, overseeing most aspects of Westport’s environment. Her tenure centered on protecting the town’s wetlands and watercourses, given the Connecticut town’s high concentration of waterways and waterfront properties. 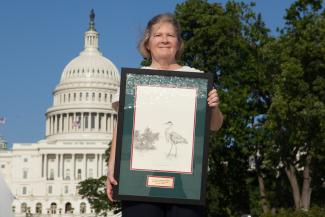 ELI recognized Mozian in 2017 for her stewardship as a member of the Sasco Brook Pollution Abatement Committee, established in 1991 to improve the brook’s water quality, and for her participation in numerous other community advisory boards. Under her guidance, the committee implemented public outreach initiatives, infrastructure improvements, dam repair planning, and amendments to Westport’s water-related policy. The 2023 National Wetlands Awards Team, Elissa Torres-Soto and Sarah Backer, spoke to Mozian shortly after her retirement, to gain insight from her lifelong experience in wetlands conservation.

Mozian’s passion for environmentalism drove her to work in local government. “I wanted to work in government because I thought it was the best way to help protect the environment,” Mozian told ELI. “I started out in the Planning and Zoning Department and went over to the Conservation Department. I spent 22 years as the conservation director, mostly doing wetlands protection. Government put me into the best position to protect wetlands.” As conservation director, Mozian reviewed development applications to ensure that projects conserve wetlands and maintain water quality. Her team granted approvals with conditions—including adding plantings, drainage, and low-impact development features in project designs to help address stormwater run-off. Mozian carefully managed the complex interactions between residential and business property owners, builders, neighbors, environmentalists, politicians, and other stakeholders in project developments.

Mozian spoke to what she called “people’s inability to connect the dots” and assess the environmental impact that their property and developments have on wetlands and water quality. Her outreach was aimed at helping people make the connection, and thanks to her efforts, Westporters have become more aware of the interactions between their property and the natural world and resources. She committed her time to educating homeowners about the impact of their upcoming construction projects on the surrounding ecosystems.

In addition to this lack of public awareness, Mozian cited the law as another obstacle to wetlands conservation. “The law is written for the property owner and not necessarily for the protection of the wetlands.” Mozian recalled that she and her team wanted to deny more projects but did not have the means to serve denials. Out of the denials issued by her team, many were contested. The Conservation Department has been sued by developers, neighbors, and homeowners, but no decisions were overturned by a court challenge.

Mozian’s hope is for individuals to gain a greater understanding and appreciation of the benefits that ecosystems provide to humans. “Sometimes with wetlands people think of them more as habitat, and they don’t think of them as providing flood mitigation, attenuation, and groundwater recharge, which is so important, [especially] with droughts. They just think we want to protect the wetlands because we are worried about animals.” For this reason, Mozian’s educational outreach centered on flooding and water quality, stressing the connection to human wellbeing. She would like people to “think of wetlands as an attractive landscape feature and try to enhance them.”

When asked about the future of wetlands conservation and environmental management, Mozian was hopeful. She believes that younger generations are more attuned to environmental issues and to the importance of the natural world, which she witnessed firsthand through her work at the local nature center. “Student volunteers [conducted] water quality testing of our streams. I would tell the students that no matter what they do, they will never look at the landscape the same way ever again. They will connect the dots [to understand] the results of having good land use practices and how that affects water quality.” Mozian looks forward to youth involvement in politics and was excited by the election of Maxwell Frost, the first Gen Z member of Congress. She hopes that as “young people get elected, sustainability will finally get the attention it deserves.”