The Environmental Law Institute’s 11th GreenTech webinar held on July 18, “The Role of Carbon Capture (CC) and Direct Air Capture (DAC) Technology in Our Climate Strategy,” couldn’t have been timelier. A week later, on July 27, Democratic negotiators reached an agreement with Sen. Joe Manchin (D-W. Va.) on a proposal that will invest $369.75 billion over the next decade in energy and climate programs, including billions in CC technologies. That same day, the White House Council on Environmental Quality (CEQ) announced two new task forces to inform the responsible development of Carbon Capture, Utilization, and Sequestration (CCUS). 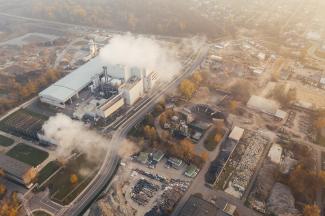 In opening the ELI webinar, moderator Sarah Grey, a Senior Associate with Arnold & Porter, noted the speakers’ basic assumption that socially responsible CC technologies will play a major role in addressing climate change. Grey briefly explained that CCUS captures carbon dioxide (CO2) from industrial processes and stores it underground, while DAC removes CO2 from the ambient air as a kind of “CO2 vacuum” and then stores it.

Dr. Jennifer Wilcox, Principal Deputy Assistant Secretary in the Department of Energy’s (DOE’s) Office of Fossil Energy and Carbon Management (FECM), noted that after 20 years of research and development in point source CC at a lower technological readiness level, FECM is focusing now on a higher readiness level by pursuing the first steps toward pilot demonstration projects. DOE is making investments in hard-to-decarbonize sectors such as cement, steel, and pulp and paper, recognizing that when those industrial facilities are retrofitted with CC and storage (CCS), it also will produce a “low-carbon supply chain.” DOE recently launched its “Carbon Negative Shot” involving many departmental offices investing their annual appropriations to reduce carbon removal costs to $100 per ton over the next decade. Significant funding to demonstrate these approaches is “on the horizon,” she said, including $3.5 billion for large-scale CO2 capture pilots and demonstrations and additional investments in more robust monitoring, reporting, and verification across the suite of DAC efforts.

Ethan Shenkman, a Partner with Arnold & Porter who served as the U.S Environmental Protection Agency’s (EPA’s) Deputy General Counsel, described his basic interest in the governance of CC technologies in a way that ensures societal benefits while avoiding societal harms. At present, both the federal and state legal governance frameworks are “somewhat splintered,” he said. EPA’s CO2 underground injection permitting program provides the only comprehensive regulations. The program requires intensive study and analysis, testing and monitoring, post-injection site care and closure, financial assurances, and other measures. But it is still at a very early stage, with only six permits issued for Class VI CO2 injection wells and 15 pending. State primacy applications are an important emerging development.

In the states, a high level of CCS legislative activity is occurring, Shenkman noted, but it has produced a “patchwork quilt” of more than a dozen state-by-state laws enacted over the past 10-15 years. To follow developments, Arnold & Porter created a “multi-state tracker” of state laws.

Dr. Rudra Kapila, Senior Policy Advisor for Carbon Management at Third Way’s climate and energy program, discussed responsible development of CC technologies within a climate justice context. The United States has the most developed policy landscape and capacity for regulating CCS and DAC, but domestic environmental groups are split into two significant factions. One faction supports CC technologies because of their potential for boosting local economies with manufacturing and other jobs and is keen to have CC technologies deployed in communities where fossil fuel jobs have been lost. A second faction, however, opposes CCS and DAC as “false solutions” that will extend the life of polluting industries, and critics point to “greenwashing” and the U.S. legacy of race as the determining factor in siting polluting facilities.

Few projects currently exist, Kapila noted, so knowledge has distinct gaps. Kapila noted that earlier this year DOE published a Request for Information that adopted Third Way and WWF recommendations. DOE has gone to great lengths to ensure that developers submit a comprehensive community engagement plan with their overall project proposals. Legacy issues clearly are a concern because neighborhoods still must deal with older pollution even after existing infrastructure receives CCS retrofits. Additionally, communities often learn about projects late in the process rather than early on, when community engagement should begin. Historically Black Colleges and Universities are an important resource for bringing community representatives on board at a project’s initial development and deployment stages.

Dr. Julio Friedmann, Chief Scientist and Chief Carbon Wrangler at Carbon Direct, emphasized that “an enormous body of knowledge” already exists about CC technologies because industrial-scale CC began in 1938 and has expanded ever since. Each year, about 40 million tons per year of CO2 is injected “safely and well,” and worldwide there are 27 facilities in operation. Given that experience and knowledge, the Intergovernmental Panel on Climate Change, the International Energy Agency, the Joseph Biden Administration, and others all recognize that CCS is required at multi-gigaton levels to achieve climate goals. In addition, most recent estimates suggest that 7-10 billion tons of CO2 must be removed—about one-half of it through point source capture and one-third through DAC. Because CC is needed at an enormous scale, “We have to figure out how to get to yes on real projects,” Friedmann said. Money is available, but now projects must be deployed.

Heavy industry accounts for 37% of global CO2 emissions, much of them not tied to fossil fuels, so a “killer app” is needed for such sectors as steel, cement, and chemicals, Friedmann suggested. Although industrial sectors are hard to decarbonize, CC is the least expensive option. The greatest barrier is a lack of “dedicated infrastructure” for transportation and storage, wells, and pipelines, which are needed for hydrogen, ammonia, and “clean fuels of all kinds.” A lack of skilled workers is another barrier, including welders, lawyers, regulators, and permit writers.

Jeremee Wetherby, General Electric (GE) Gas Power’s Product Line Leader for the Emerging Technologies and Incubators Team, provided an industry perspective on what CC technologies entail and where they are headed. The 2021 International Energy Agency’s World Energy Outlook and other forecasts conclude that gas turbines will be part of future electricity generation, albeit decarbonized. Although GE supports rapidly deploying renewable energy, wind and solar are not dispatchable. Battery storage is currently insufficient for long-running, reliable power, but gas turbines are a solution, he said. To ensure reliable dispatchable energy, GE is positioning its gas turbine power plants and related products to drive cost-effective, efficient, and clean energy systems. GE aims to demonstrate its technology at full-scale before 2030.

To learn more about upcoming ELI GreenTech webinars like this one, visit: https://www.greentechconference.org/webinar-series.