Local governments can play a critical role in reducing greenhouse gas (GHG) emissions and preparing their communities for projected climate change impacts. These governments are well-positioned to assess local climate hazards and risks, identify opportunities to reduce GHG emissions, and engage the community in identifying priorities. Crucially, they are the first responders to public health emergencies and extreme weather events and possess powerful tools over land use and the built environment. For all these reasons, municipalities are increasingly taking a comprehensive approach to both mitigating and adapting for climate change by developing and implementing climate action plans. This is the first of a four-part series of blog articles introducing aspects of local climate planning, including developing a climate action plan, mitigation versus adaptation, common shortcomings, examples of legal action challenging the sufficiency of local climate plans, and emerging trends. 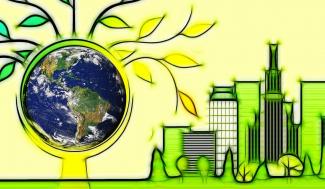 The three most common types of climate action plans may be prepared either as separate documents or come together in a single plan. Mitigation plans focus on reducing GHG emissions and were the first category of climate plan to emerge. Adaptation plans center on building resilience to the effects of climate change on local infrastructure and services, public health, the economy, and natural resources. Sustainability plans (often titled “Green New Deals”) integrate mitigation and adaptation planning with comprehensive environmental protection, job creation, enhanced traffic safety, general community planning, housing, and more. Climate action plans may be incorporated into other planning documents, such as those for land use and transportation, capital improvements, hazard mitigation, housing, waste management, economic development, and public health.

There are multiple steps in the process of drafting and gaining official and public approval of a climate action plan. The responsible agency is often the Office of Sustainability or Resilience, headed by the Chief Resilience or Sustainability Officer. Otherwise, the agency in charge of land use and planning activities generally takes the lead. Other agencies will play crucial roles in both planning and implementation, especially those involved in land use, finance, public health, transportation, utilities, sanitation, engineering, building, and parks and recreation.

A preliminary step is scoping, which involves setting an agenda in collaboration with both internal and external stakeholders. Internal stakeholders include municipal and regional government agencies, especially those responsible for transportation planning and environmental quality. External stakeholders encompass community, faith, civic, and business leaders; the private sector; academic, scientific, cultural, and philanthropic institutions; and economic development and nongovernmental organizations (NGOs). The lead agency may convene both interagency and external working groups, and coordinate efforts with other governmental bodies in the region, including county, tribal, and municipal governments, as well as special districts and the local Metropolitan Planning Organization.

At all stages of scoping, drafting, and reviewing what will become the final plan, local governments consult residents through a public engagement strategy. Outreach and data collection may encompass workshops, surveys, open houses, and community presentations. The plan’s legitimacy rests on the depth of engagement and the lead agency’s responsiveness to public input and concerns.

After the plan is modified, based on expert and public feedback, the plan is finalized—along with an accompanying environment assessment document, if required under state law—and approved by the elected officials. Next, the local government begins implementation. Public accountability and transparency measures include ongoing oversight, such as through a steering committee; updating the GHG inventory regularly; and measuring, tracking, and communicating progress, outcomes, and funding status to the public. The lead agency issues annual reports and revises the climate action plan, following the same or similar process, on at least a five-year cycle.

Structure of a Climate Action Plan: Elements Common to All Plans

Climate action plans preface discussion by establishing the baseline situation, establish projections regarding GHG emission levels and climate change impacts to the jurisdiction, and highlight both prior accomplishments (including under any prior iterations of the plan) and ongoing activity.

The core section details the action the city plans to take. This section is categorized into chapters by sector; some issues cut across multiple sectors, such as equity, jobs and economy, and public health concerns pertaining to heatwaves, drought, vector-borne and waterborne diseases, and mental health. Each chapter is divided into broad goals, initiatives intended to advance each goal, and specific action items selected to accomplish each initiative.

Goals are measurable and quantifiable, with benchmarks. For example, indicators for mitigation may include achievement toward carbon neutrality, 100% renewable energy, and reductions of carbon dioxide equivalent (CO2e) by sector. Infrastructure-related indicators could include miles/kilometers of pipeline constructed, electric vehicle charging stations installed, and permeable surface area converted to green infrastructure. Some plans link goals to specific Sustainable Development Goals.

Action items may apply to the entire jurisdiction or apply solely to government operations. Possible actions may take the form of policy, regulation, program, capital improvement project, collaboration, education and outreach, community capacity-building, or a lobbying activity targeting higher levels of government. The plan identifies the specific legal instrument needed for each, such as a municipal ordinance or resolution, regulatory action, department directive, or a memorandum of understanding, and outside partners, such as other jurisdictions, NGOs, academic institutions, and major area employers. Robust plans identify the financial resources needed to implement each item, potential sources of funding or financing, and the payback period on initial investment. Plans detail outcomes in terms of expected direct and co-benefits, expressed in CO2e reductions, economic growth, disasters avoided or abated, and public health and wellness.

Climate action plans establish time lines for each action item, classified as immediate, short-term (within 1-2 years), medium-term (by 2030 or 2035), and long-term (by 2050). Plans will also recognize where the local government has limited power, noting where there is need for federal and state action, along with regional collaboration. Case studies explore best practices, looking at initiatives in other jurisdictions around the country and the world. Technical appendices set forth supporting studies and reports as well as the drafters’ assumptions with an explanation of their methodology and sources of data.

Part II will explain the differences between planning to mitigate GHG emissions versus adapting to climate change impacts already projected to occur.