Part 1 of this two-part blog series provided a background on climate change and internal displacement and underscored the need to develop equitable climate programs. Part 2 provides policy recommendations for the federal government to proactively address the challenges of climate-related displacement.

To effectively address projected climate impacts, the federal government should put in place measures to reduce the extent of displacement related to both sudden and slow-onset stressors. One such measure is increasing the resilience of built environments in cities and highly populated areas so they can better withstand climate stress. Federal funding and support for resilience programs should target coastal areas affected by sea-level rise and increasingly severe storms, river basins prone to flooding, regions sensitive to wildfires, and other at-risk parts of the country.

Another preemptive measure is to help people move out of areas that are particularly prone to climate-related threats, thus preventing future damage and allowing people to resettle voluntarily rather than suffer sudden displacement. FEMA has administered the Hazard Mitigation Grant Program since 1993, providing funding for municipal and tribal governments to undertake mitigation measures—including buying out hazard-prone housing. The Department of Housing and Urban Development also provides funding through the Community Development Block Grant—Disaster Recovery program.

However, such funding is only available after a president declares a disaster and cannot be used to proactively manage future hazards. The current FEMA buyout program also often includes a years-long wait time; an NRDC study found that it takes an average of over five years between a flood and the completion of a FEMA-funded buyout project, which affects the accessibility, equity, and effectiveness of such programs. A recent paper reviewing local floodplain buyouts found that many state and local governments did not rely solely on federal funding but utilized a range of funding mechanisms including municipal/green bonds, revolving loan funds, and stormwater utility fees. Such tools allowed buyout programs to be administered with greater speed and flexibility. Increased flexibility of federal funding or increased integration between federal, state, and local programs would help make floodplain buyouts and other mitigation funding programs more effective. 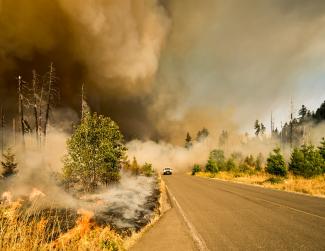 Federal assistance has already been granted to a few community relocation projects, including the relocations of residents in Isle de Jean Charles, Louisiana, and Newtok, Alaska. Both these communities are becoming uninhabitable due to erosion, stemming from coastal storm surge and permafrost degradation, respectively. These communities have received some degree of federal funding and support for their relocation efforts from the Community Development Block Grant Program, the FEMA Hazard Mitigation Grant Program, and infrastructure spending among other sources. However, lack of comprehensive policy around community resettlement on the state and federal levels have made their journeys long and difficult; it took over 30 years to begin Newtok’s relocation process and over 20 years to begin Isle de Jean Charles’.

A U.S. Government Accountability Office (GAO) report on the Isle de Jean Charles and Newtok case studies noted that federal programs do not fully address climate migration, resulting in unclear distribution of authority and assistance being provided on an ad hoc basis. The GAO report recommends addressing these governance issues and undertaking a federal climate migration pilot program to prepare the United States to meet the needs of internal climate migrants. To do so, the federal government must designate a specific agency to oversee climate displacement and migration, streamline the planning and implementation process, and expand the scope of funding programs to address future impacts and migration rather than only past disasters.

Newtok and Isle de Jean Charles are both primarily indigenous communities. Federal agencies must also consider tribal sovereignty, cultural practices related to the land, and communities’ histories of forced migration and displacement in any resettlement plans. While some of these considerations are specific to indigenous communities, any resettlement program must include community engagement and accountability measures to ensure that residents have a meaningful voice in their relocation.

When preemptive resettlement is not possible or fails, the federal government should improve post-disaster funding and support to facilitate relocation and resettlement in an equitable manner. Lack of affordable housing often prevents low-income residents from being able to return to affected areas after a disaster, as residents are evicted or low-income housing is destroyed and not replaced. The government should expand and rebuild federally assisted housing after disasters, and FEMA and HUD programs should work with state and local governments to ensure continued availability of low-income, accessible housing.

The process of applying for HUD or FEMA funds should also be streamlined and clarified to maximize accessibility to members of marginalized communities. Finally, programs should be expanded to improve resilience and infrastructure of the host areas to which displaced people relocate. Federal funding generally follows the disaster, not the people affected. However, host areas supporting displaced people need assistance in providing housing, education, health care, and other services. Federal funding mechanisms must be put in place to ensure that these services and infrastructure can be quickly and effectively implemented.

In order to accomplish these goals, the federal government should also take on data collection and public education efforts. Tracking climate-related population changes would reveal which areas are impacted by different stressors and which areas are currently or likely to be playing host to displaced people, providing important information about what resilience measures may be necessary and where to direct funding.

Public education is also needed to ensure residents are aware of climate-related stresses that may impact them and the types of assistance and support that are available. Residents should be educated about stresses in their areas and available options, such as buyout programs, so they can make informed decisions about moving or relocation. Disaster recovery programs and services should be widely broadcasted so displaced residents can better navigate the process of resettlement.

Community engagement and input can also be used to help direct federal action, as community members may bring up new concerns or areas of priority. Such measures would help the government more proactively address the challenges of climate-related displacement with equity as a central consideration.