Climate Science in the Courts: A Review of U.S. and International Judicial Pronouncements 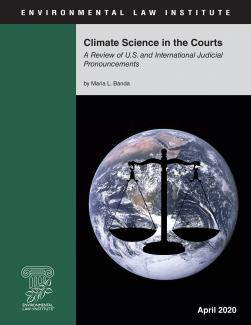 Climate change has been the subject of considerable political controversy in the United States, and climate skepticism—or doubts about the basics of climate science—have not been uncommon in the public debate. At the same time, U.S. courts in several recent high-profile cases, including Juliana v. United States and City of Oakland v. BP p.l.c., have expressly accepted as authoritative the science behind climate change, including its conclusions that the climate is warming, that human activity is driving the observed and anticipated changes, and that those changes will have a variety of adverse impacts in the United States and globally. Given the nature of the public debate, this report seeks to determine whether these decisions are representative of a broader trend in the judiciary or whether they are outliers. It does so by examining judicial pronouncements in different climate-related proceedings since 2015, including in civil, administrative, constitutional, and criminal law matters, in the United States and in a dozen foreign jurisdictions. The report’s main conclusions are fourfold. First, the report finds that today a vast judicial agreement exists on the causes, extent, urgency, and consequences of climate change. This finding holds true across U.S. federal and state courts, across different types of proceedings, and across jurisdictions. This is a major shift since the early climate lawsuits when climate skepticism was still commonplace among judges and litigants. Second, the report finds that the parties, including the U.S. federal government, appear to agree on basic climate science even where they may dispute its legal implications. Third, the report finds that the U.S. judicial experience has been similar to the experience in other countries, where courts have been reviewing much of the same scientific evidence and making many of the same findings of climate facts. In this sense, climate science has acted as the ultimate lingua franca across courts. Finally, as the report shows, the judicial consensus on climate science has not translated into judicial intervention. Courts, especially in the United States, have generally exercised restraint and deferred to the representative branches of government to devise solutions to the climate challenge. The report concludes with a discussion of whether, and how, this judicial consensus might inform public understanding of, and debate about, climate change.