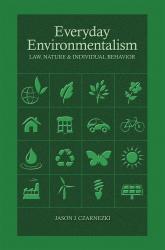 Faced with the seemingly overwhelming prospect of global climate change and its consequences, is there anything that a person can do to make a difference? “Yes, there is!” says Jason Czarnezki. Writing as a lawyer and environmentalist, he addresses the small personal choices that individuals can make in order to have a positive effect on the natural world. Czarnezki compellingly describes the historical and contemporary forces in the United States that have led to a culture of “convenience, consumerism, and consumption.” He also investigates the individual decisions that have the worst environmental impacts, along with the ecological costs of our food choices and the environmental costs of sprawl. Ever aware of the importance of personal choice, Czarnezki offers a thoughtful consideration of how public policy can positively affect individual behavior.

Jason J. Czarnezki is a Professor of Law in the Environmental Law Center at Vermont Law School, home to one of the nation’s leading environmental and natural resources law and policy programs. He has held academic appointments at Marquette University Law School, DePaul University College of Law, and Sun Yat-sen (Zhongshan) University in Guangzhou, China, as a J. William Fulbright Scholar. Previously, Professor Czarnezki served as a law clerk to the Honorable D. Brock Hornby of the U.S. District Court for the District of Maine and as a law clerk for the Bureau of Legal Services at the Wisconsin Department of Natural Resources. Professor Czarnezki, who received his undergraduate and law degrees from The University of Chicago, was born and raised in Milwaukee, Wisconsin, and currently lives in Montpelier, Vermont.