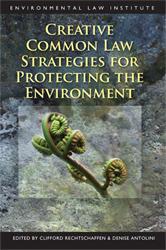 This book provides an overview of the major common law remedies, and describes the limits of using statutory remedies under environmental citizen suit provisions. The authors describe their experiences in bringing cutting-edge public nuisance actions against car manufacturers and large power producers because of their greenhouse gas emissions; successful products liability actions against the manufacturers of PERC and MTBE for groundwater contamination; path-breaking litigation filed by public entities against the lead paint industry; lawsuits under the public trust doctrine and other common law doctrines to protect water, fish, and wildlife . . . and much more.

Denise Antolini is an associate professor at the William S. Richardson School of Law, University of Hawai`i at M noa, Honolulu, Hawai`i, where she directs the school’s environmental law program. After a federal clerkship in Washington, D.C., she practiced for eight years with the Sierra Club Legal Defense Fund (now Earthjustice) in Seattle and Honolulu. She joined the law school faculty in 1996, teaching torts, environmental law courses, and legal writing. In 2003-2004, Antolini served as the Fulbright Distinguished Chair of Environmental Studies in Turin, Italy. In 2006, she received the University of Hawai`i’s highest teaching award, the Board of Regents Excellence in Teaching Medal. Under her leadership, the environmental law program received the American Bar Association’s 2006 award for Distinguished Achievement in Environmental Law and Policy. She is a graduate of Princeton University (magna cum laude); Boalt Hall School of Law, University of California at Berkeley, where she served as editor-in-chief of Ecology Law Quarterly; and she has a master’s degree in public policy, also from Berkeley.

"This book dramatically captures the ways that common law theories are being used by environmental plaintiffs around the country, as well as the obstacles that remain. All environmental litigators—whether they represent plaintiffs, defendants, or some of each—will find the book an invaluable guide to a territory whose boundaries are still being explored."
- Michael B. Gerrard, Arnold & Porter, Former Chair, Section of Environment, Energy & Resources, American Bar Association

"This is the companion book to everything you already know about environmental law. The other half of the field, here described, includes the many actions for injunctive and damage relief based on common law, tort, trespass, public trust and other claims that are as old as they remain innovative and ready for use. These are the remedies that government and industry fear, because they cannot be co-opted by unwilling agencies, hostile legislatures, paltry sanctions and the erosion of statutory schemes. These are important principles, and good reads."
- Oliver A. Houck, Professor of Law, Tulane University