Why We Must Focus on “Embodied” Emissions Immediately—In Practice, Policy, and Legislation

With the 2021 UN Climate Change Conference (COP26) focused on pledges reducing carbon emissions 2030 and beyond, the urgency to cut emission now seems overlooked. Unfortunately, the 2020s are ground zero in our uphill battle to thwart the rise in global warming, soon enough for those pledges to be meaningful. As global warming already exceeds 1°C of the 1.5°C targeted and continues to climb, we must slow emissions growth within this decade for a reasonable chance of future success.

Decarbonizing the global energy supply by employing carbon-free renewable sources such as wind, solar, geothermal, and hydro is essential, but unfortunately a long-term solve all. In the meantime—the 2020s—aside from abandoning coal, throttling methane, and constructing energy-efficient buildings and appliances, the thrust is to reduce operating emissions by electrification: switching to electric vehicles, heating, and cooking. Increased electrification, as well as bringing more carbon-free energy online, requires the construction of plants, equipment, and infrastructure to enable its production, storage, and distribution. Therein lies a source of emissions that are generally taken for granted—their upfront “embodied” emissions.

Embodied emissions are the greenhouse gases emitted during materials and product fabrication and the construction of our physical environment. Often ignored or deemed too perplexing to resolve, they accelerate the rate of global warming before buildings, infrastructure, and manufactured products are even used. While it is true that future embodied emissions will be minimal once the energy used for manufacturing and construction becomes net zero, that lies decades away.

We must contend with embodied emissions immediately. These emissions must be factored into every policy and legislative decision over the next 10 to 15 years. With an eye toward cutting emissions within this decade, the execution of the Joseph Biden Administration’s Infrastructure and Build Back Better legislation must weigh each project’s upfront embodied emissions against its projected 10-year emissions savings.

In some cases, delaying specific projects or narrowing incentives until the 2030s can be warranted, a time when we will be further ahead on the decarbonization time line. Infrastructure, however, cannot be delayed, especially for the production and distribution of renewable carbon-free energy. Nonetheless, it can be designed and engineered with a careful eye toward significantly reducing a project’s upfront embodied emissions, choosing a low embodied carbon construction methodology project-by-project—and notably by reducing the content of cement concrete. Cement alone accounts for 7% of the world’s energy-related carbon emissions.

According to the IPCC Climate Change 2021 report, global warming has a “near-linear” relationship with the CO2 we have already emitted. Those emissions, estimated at nearly 2,400 gigatonnes (Gt) of human-caused CO2, span from pre-industrial 1850 through 2019. Unfortunately, our CO2 emissions can remain in the atmosphere for a millennium. To limit warming to the 1.5°- 2°C range hoped for with at least 80% likelihood of success, only 300 GtCO2 and 900 GtCO2 of additional emissions respectively are allowed, commencing with 2020 until net zero is realized worldwide.

Having emitted 40 GtCO2 or more annually for close to a decade—from fossil fuel emissions plus six GtCO2 per year from land use—we will surpass 300 GtCO2 in 2027, and 900 GtCO2 in 2042 without immediate reductions. Both durations are a far cry from benefiting from net zero commitments on a 2060 to 2070 time line. As such, what we do in the 2020s is crucial. We cannot push ahead blindly, ignoring the emissions we expend during this period in pursuit of goals for the 2030 decade.

All areas of building and fabrication involve choices regarding materials and methods, choices of embodied carbon profiles—choices of the carbon footprint. Some municipalities have adopted informed programs designed to reduce carbon emissions. For example, the city of London refused permission to construct the Tulip tower, partly for the “unsustainable concept of using vast quantities of reinforced concrete for the foundations and lift shaft.” New York City’s Local Law 97 regulates the maximum “operating” emissions per square-foot allowable by 2024 for most new buildings exceeding 25,000 gross square feet. The same conditions can and should be legislated to regulate “embodied” emissions as well. 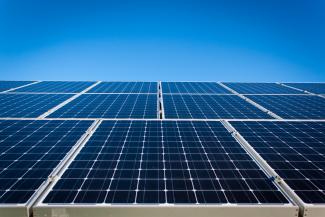 As all new policy incentives encouraging fixture or appliance replacement—or in northern climes that encourage or require small-scale rooftop solar panel installations—involve the generation of upfront embodied emissions, they should also be subject to scrutiny. The downside of immediate embodied emissions should be compared to projected operating emissions savings over the first eight to 10 years of operation.

Energy-efficient appliances? Solar panels? Yes, those too. Such replacements and installations can take a decade or more before their emissions savings exceed their fabrication, transportation, installation, and maintenance emissions—and many more years to accumulate any noteworthy benefits. High-efficiency solar farms are a necessity worth that investment even in marginal or low-producing regions. But incentivizing low-output small-scale emitters in certain geographical regions, or installations with insufficient hours of solar irradiance, worsens the situation during this critical decade, moving the goalposts further down the road. Though many will argue that long-term benefits outweigh any upfront emissions, the importance of cutting unproductive emissions within this decade is paramount for projects with less urgent value.

With appropriate oversight of unnecessary embodied emissions, whether for new buildings and infrastructure or incentivizing projects purported to be “sustainable” or “green,” policymakers and legislators, designers, and engineers can curtail the significant release of greenhouse gases within this decade.

Bill Caplan’s Thwart Climate Change Now: Reducing Embodied Carbon Brick by Brick addresses how to tackle the built environment’s “embodied” carbon emissions, highlighting specific design and policy issues that overlook their own contribution to emissions. Written for a variety of readers—from policymakers and legislators to architects and developers—the book brings together climate change science, sustainable design, and green policies, followed by case study examples to support design, policy, and legislative recommendations to slow emissions growth in the near term.