When Only Congress Can, It Can't

I didn’t know when I became editor of the Forum that the era of landmark environmental lawmaking was almost over—with some exceptions that I will duly note. The year was 1990, and the buzz was all about new amendments to the Clean Air Act that would address the scourge of acid rain through the first large-scale test of emissions trading. It was the kind of legislation that is so desperately needed today to address the climate crisis by moving the United States to a renewable energy economy—a monumental task requiring a comprehensive, nation-wide approach. 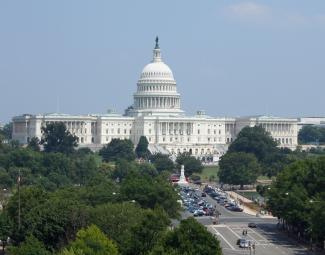 Which is why the Inflation Reduction Act signed by President Biden in August is such a big deal. Unfortunately, however, the measure failed to achieve the 60-vote threshold for most legislation in the Senate—it was passed using the reconciliation system that allows bills to succeed by a simple majority if they only concern budgetary matters. While the new law promises to rapidly move the economy toward renewable energy, it lacks the breadth of approach in a true environmental law like the Clean Air Act, one that would require a bipartisan effort.

From the perspective of three decades beyond the signing of the CAA Amendments, environmental lawmaking can be divided into three general eras, speaking loosely. The 1970s was the decade in which all the major statutes were passed. The 1980s was a time of reauthorization, revamping, and strengthening. That ended with the Clean Air Act Amendments of 1990. Finally, there has been the period of more than three decades where with some exceptions the action on the major statutes has shifted from sausage-making to implementation.

Before I became editor, there was a tradition in the Forum of showing bills in progress via a cartoon depicting a horse race. Thus in 1984 there might be one horse labeled RCRA, another labeled CWA, or ESA, etc., generally a half dozen in progress. When the CAA amendments passed in 1990, on my watch, we heralded the event with a cartoon on the cover showing a horse collapsed on the finish line, burdened by all the stakeholders riding on its back. Little did I realize at the time, but the metaphor was dead—no longer would we see multiple major environmental bills in the Congress at the same time.

Immediately afterwards, there was talk of reauthorizing the Clean Water Act, and the Forum took note by organizing one of our Debates on what revamped legislation might do, bringing together the EPA Water Office with key stakeholders. The same then for the Resource Conservation and Recovery Act and the division of EPA then known as OSWER. But neither legislative proposal was taken seriously.

It is important to note the exceptions in this period of legislative drought: two minor statutes and a major one. In 1996 the Safe Drinking Water Act was revamped. It required cost-benefit analysis, satisfying conservatives. The same year, the Food Quality Protection Act was signed. It replaced the zero-tolerance Delaney Clause for carcinogenic residues in food. And Congress amended the Toxic Substances Control Act in 2016, succeeding in large part because the existing legislation was so bad, uniting stakeholders.

Why has Congress been silent on all the other major environmental legislation, and for more than 30 years? The answer is the anti-government revolution that took over the Republican Party with the election of Ronald Reagan in 1980. In his first inaugural address, the new president declared the government as the source of our national disquiet, and the GOP has been largely opposed to government’s role in Americans’ economic lives ever since.

The Reagan Revolution did not happen overnight. In fact, as mentioned above, there was a whole decade of strengthening environmental law following his inaugural. EPA had more employees and a larger budget at the end of the Reagan administration than at the start.

The change happened shortly after the CAA amendments were passed in 1990, a last gasp of bipartisanship on a major economic issue. Ever since then, thwarting the opposition seems to be the main strategy, and that leaves the environment usually sitting on the sidelines. The party-line vote has replaced bipartisan consensus—the hallmark of all the major environmental laws. And the filibuster means that major legislation is nearly impossible—both branches need to be in the hands of the same party, including at least 60 seats in the Senate, which rarely happens.

The failure of the 2009 Waxman-Markey climate legislation during the Obama era—it would have established a cap-and-trade system for carbon, modeled after the acid rain program—is a stark example of Congress’s inability to address compelling, large-scale environmental problems through a comprehensive, economy-wide program. That leaves any president only regulatory solutions that are often legally vulnerable, or in the case of the new Inflation Reduction Act, with measures restricted to finessing the budget.

In that regard, in its term-ending decision in West Virginia v. EPA, the Supreme Court nixed an EPA climate rule, declaring that major economic questions cannot be addressed by regulatory agencies without specific congressional consent. And that consent is hard to come by in our present system.

This blog originally appeared in the Notice & Comment column in the September/October 2022 issue of The Environmental Forum and is republished with permission. Notice & Comment is the editors’ column and represents the signatory’s views.