Water Efficiency and Conservation: The State of the States

Most states have significant room to improve their legal frameworks regarding water conservation and efficiency, and long-term resiliency, according to a report released last month by ELI and the Alliance for Water Efficiency (AWE). In the 2017 Water Efficiency and Conservation State Scorecard, a five-year update to the 2012 scorecard, each state received two separate grades: one for water use efficiency and conservation, and one for climate resiliency planning. The national average for both is a “C,” but with some great grades in each area and more than half of the states earning higher water use efficiency and conservation scores than they did in 2012.

As the number of droughts and water shortages continues to increase nationally, the existence of state-level laws that advance water efficiency and conservation is becoming more critical. The 2017 State Scorecard update identified some key trends and notable states:

Perhaps more importantly, developments in water use efficiency and conservation laws were widespread. Comparing the 2012 and 2017 scores, not only did more than half of the states improve, but the characteristics of those that improved varied significantly. Leading states are still advancing; states with some legal foundation in this area made notable strides; and a few states from whom little was previously seen are taking promising steps. Yet, not all of the trends were positive. For example, seven states discontinued or decreased designated funding for urban conservation programs, a discouraging development as sound water management requires continued, substantial investment. 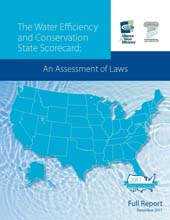 The report’s addition of a resiliency planning score provides another perspective on preparation, and the two grades were surprisingly dissimilar for many states. The climate resiliency portion revealed that many states are unprepared for potential climate change impacts on water supplies, even those that may be leading in water efficiency and conservation policy. While the national average is a “C”, the scores ranged significantly.

Data for both the climate resiliency preparedness and water use efficiency and conservation portions indicate that geography is not necessarily an indicator of a state’s approach to addressing the issues covered by the report.

The report and accompanying materials are available here.