An environmental threat of very real proportions concerns celestial objects such as asteroids that hit the Earth—as everyone knows, one did in the dinosaurs. The same applies in a less dangerous but more frequent manner to unwanted “de-orbiting” of artificial satellites, and to the careless discarding of the boosters used to get them aloft. 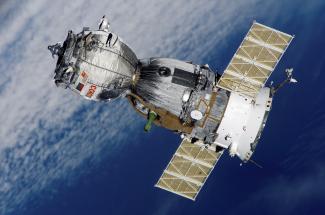 As to the first, debris left over from the formation of the solar system pummels our planet on a constant basis—we call these asteroid or comet fragments meteors when they burn up in the atmosphere and meteorites if they hit the ground. As to human-made space debris that can fall to our planet’s surface, “More than 1,000 rocket bodies are estimated to have uncontrollably re-entered the atmosphere in the past 30 years,” according to New Scientist.

Last April, a piece of such artificial space debris, reportedly from a Chinese Long March rocket, hit near a village in India. Two years earlier a part of another Chinese rocket landed in a village in Ivory Coast. No one was harmed in either incident. And readers of a certain age will remember Skylab, the first space station, which fell from orbit in 1979, scattering debris over Western Australia and the Indian Ocean.

Skylab weighed 100 tons and would have caused real damage if it had landed in a populated area. The last few weeks of its existence were met with a worldwide response finding humor in the event—painting rooftop targets, for instance—as technicians desperately succeeded in using the huge satellite’s fuel reserves to wrest it to a safe demise.

But in fact had Skylab landed in Mombasa or Mumbai or Quito, the death toll would have been unimaginable. Because most satellites orbit near the equator and not high up, their debris when atmospheric drag forces them down can land on the largely poor countries of the tropical zone, raising a real environmental justice issue.

So far there have been no casualties from falling artificial space objects, but there are bound to be. Rocket launches have, well, skyrocketed, escalating to well over one hundred per year, and many loft multiple satellites. Scientists at University of British Columbia, New Scientist reports, calculate that the odds are one in ten of “casualties being caused by falling debris over the next decade.”

How can at-risk societies fight back? According to Ram Jakhu of McGill University in Montreal, the United Nations Liability Convention of 1972 comes into play here. The convention has only been used once in this manner, when Ottawa won $2.3 million from the Soviet Union after one of its satellites crashed in Canada in 1978. “I have no doubt there is going to be another serious incident,” according to Jakhu. “There’s a strong probability of hurting somebody or damage to property.”

There is a solution: an international agreement or arrangement such that rocket boosters and satellites contain sufficient surplus fuel—a rounding error in their total mission costs—so they can be brought down safely or be put into a benign orbit. These sort of “best practices” would be easy to put into place on a voluntary basis or by making the liability convention’s provisions dissuade slackers—sort of an astronomic Superfund. It’s not rocket science.

Chances are you won’t have a satellite fall on your head. But humans have in fact been injured by pieces of meteors entering Earth’s atmosphere or by the flash and shock waves they produce. There was the 2013 event in Siberia, mirroring a much more destructive meteorite that hit an uninhabited region in that wilderness in 1908. The recent event did hospitalize people and cause property damage. And it was caught on video by numerous observers.

According to an account on Space.com, the “meteor was a small asteroid—about the size of a six-story building—that broke up over the city of Chelyabinsk, Russia. . . . The blast was stronger than a nuclear explosion. . . . The shock wave it generated shattered glass and injured about 1,200 people.” But, as the Daily Beast reports, “Perhaps the most disconcerting thing about it aside from the damage and injuries it caused to the city was that it went largely undetected by astronomers and asteroid surveyors on the ground.”

In 2002 a small asteroid large enough to cause mass casualties should it hit Earth was given “about a 1 in 9,300 chance of an impact in 2049,” Wikipedia relates. Compare such a risk estimate, in which large swaths of humanity are seemingly at stake, with the response we give to the excess cancers expected at Superfund sites. The asteroid was later found to be benign, but it was a wakeup call to events that are low probability but high impact.

Three years later, Congress mandated that NASA monitor all Near Earth Objects of a dangerous size. In 2016, the Daily Beast notes, “NASA launched the Planetary Defense Coordination Office to identify and respond to any potential comet or asteroid impact endangering Earth.” But, “The task remains undone.”

Just in case, in September NASA impacted a refrigerator-size satellite into an asteroid as big as the Great Pyramid at Giza in an attempt to alter its path. “The target was Dimorphos, a rock orbiting another, much larger asteroid called Didymos,” according to the Washington Post. Scientists picked such a pair because it would be easy to evaluate the effect on the smaller space rock’s trajectory. And Dimorphos was not in danger of hitting Earth, nor could the collision produce a dangerous orbit.

This blog originally appeared in the Notice & Comment column in the November/December 2022 issue of The Environmental Forum and is republished with permission. Notice & Comment is the editors’ column and represents the signatory’s views.