Pearls of Wisdom From a Mississippi Fisherman: A Conversation With Ryan Bradley (Why I Participate in Gulf Restoration)

Historically, the Gulf Coast region has produced more seafood than anywhere else in the continental U.S., both in volume and dollar value. Before the BP oil spill, in 2009, the Gulf seafood industry provided over 213,000 full- and part-time jobs. The oil spill has had a devastating impact on people working in the Gulf’s seafood industry. As a result of the BP oil spill, over 88,000 square miles of the Gulf’s federal waters—nearly 37%—were closed to fishing. There were also fishing closures in the state waters of Alabama (40% closed), Florida (2% closed), Louisiana (55% closed), and Mississippi (95% closed). Fishermen are still facing financial instability years after the spill, and have observed significant declines in landings and stock quality. Here, we highlight one Gulf fisherman’s perspective. 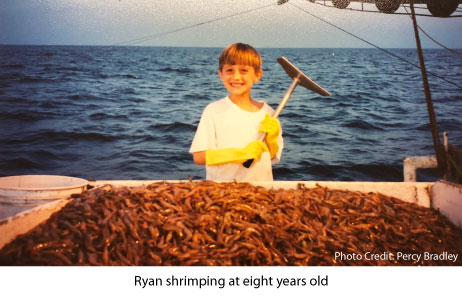 Based in Long Beach Mississippi, Ryan Bradley is a fifth-generation commercial fisherman, with many years of experience fishing oysters, shrimp, crab, and other fish. He started shrimping with his grandfather when he was eight years old. By the time he was a teenager, he was running boats by himself and had earned his captain’s license. He has owned and operated several family-owned vessels. And for the past three years, Ryan has been the director of Mississippi Commercial Fisheries United, Inc. (MSCFU), an organization of nearly 200 seafood industry members and community stakeholders.

Following the April 2010 spill, Ryan participated in BP’s Vessels of Opportunity Program, which provided boat operators temporary employment during the cleanup response. He worked nearly 80 continuous days scooping oil out of Gulf waters. However, it wasn’t until about a year ago that Ryan became involved in the restoration processes. “Initially we just stepped back; we weren’t really engaged in the process,” Ryan explains. But as time went on, he says that he began to notice money being spent on projects that he and other commercial fishermen weren’t convinced were going to be beneficial. “We were . . . concerned that some of these projects would be detrimental to the commercial sector . . . . For example, shrimp is the largest commercial fishery in the southeastern U.S., and there really hadn’t been a lot of projects or effort that’s gone in [to restoring shrimp habitat].” They were also “really concerned about . . . projects that further degrade habitat.”

As a result, Ryan became motivated to help the voices of the commercial seafood industry be better understood and addressed moving forward. Ryan is clear that he doesn’t fault the restoration decisionmakers: “It’s our duty to come to the table as well.”

As the director of MSCFU, Ryan acts as a liaison between the fishing community and the restoration decisionmakers: he relays information about the restoration processes to MSCFU members, advocates for their interests and concerns, and assists in submitting verbal and written comments and project ideas. Ryan’s goals include keeping fishermen informed and educated about the restoration processes and providing his community a platform to express their ideas and concerns about restoration. In addition, given the current decline in Gulf fisheries stocks, Ryan is also involved in various efforts to help fishermen diversify their income sources—for example, by participating in the implementation of restoration projects.

Ryan views participation as mutually beneficial for the fishing community and restoration decisionmakers: fishermen can use their expertise to submit project ideas and feedback, which in turn can lead to better restoration outcomes. As Ryan points out, fishermen have a very strong incentive to help ensure the success and sustainability of the restoration projects, since these projects will impact them for years to come.

In the future, Ryan hopes the restoration decisionmakers will provide more opportunities for public comment and more opportunity to involve stakeholders earlier in the project planning process. 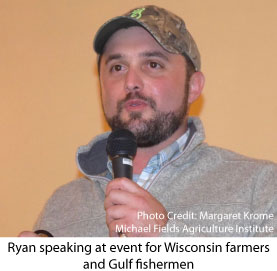 Through his participation in the restoration processes, Ryan has already made some headway. Last November, he stood at the microphone at a public meeting held by the natural resource damage assessment trustees, where he asked the trustees to consider funding an oyster shell recycling program in Mississippi. He explained that many fishermen are hoping that future oyster restoration projects will use oyster shells for cultch material. Since demand for shells often exceeds supply, Ryan proposed a project to recover shells from local restaurants, processing plants, and other sources, modeled after successful recycling programs in other states and a pilot project he helped organize at a local oyster festival.

In response to his comment, Ryan was quickly contacted by a representative of the trustees, who expressed a commitment to getting the project funded. Following an in-person meeting, there is now a detailed plan with a budget and methodology under development.

Ryan is optimistic about increasing fishermen engagement in the restoration processes. He hopes that, in addition to proposing ideas and providing feedback, fishermen will be involved with the implementation of restoration projects. Most importantly, Ryan hopes more fishermen will come to meetings and speak up for their needs and concerns. He believes that his attendance at public meetings was an important factor in gaining traction for his oyster shell recycling program project idea.

“Part of it is just having the confidence just to walk up to [the restoration decision-makers] and strike up a conversation, tell them our concerns,” says Ryan. “I think it helps being from the fishing community, I know what I’m talking about.” Ryan goes on to note, “A lot of times they’re interested in hearing directly from the fishermen . . . having someone from the community who knows what they’re talking about, I think they’re very receptive to it.”

This conversation originally appeared in the ELI Gulf of Mexico team’s “Why I Participate in Gulf Restoration” blog series. The series aims to highlight the views of community members impacted by the BP oil spill and to provide a glimpse of some challenges and successes they face in getting involved in the restoration processes.