In the waning days of April, President Biden signed the Modernizing Access to Our Public Land Act (MAPLand Act). The Act received overwhelming bipartisan support, passing the House 414-9 and the Senate unanimously via voice vote. It’s not a long bill, but it has the potential to improve outdoor recreation opportunities by requiring agencies to integrate information related to public lands access and make that information available to the public through digital mapping tools. 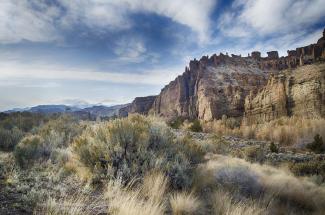 Finding out where public lands are, and who exactly owns and manages them, is not always an easy task. Never mind figuring out how to get to them, which can often be the crux of the problem. In some cases, public lands are surrounded by adjacent private lands, meaning access to outdoor recreation opportunities in those areas is effectively cut off. A survey of public lands in 22 states revealed more than 16 million acres of landlocked public land parcels that are practically closed off to public access.

Federal agencies such as the Bureau of Land Management, National Park Service, and the U.S. Fish and Wildlife Service manage land that has tremendous opportunities for outdoor recreation, including camping, hiking, climbing, canyoneering, and rafting—but nearby and adjacent private land is typically off limits. Although government agencies do currently maintain databases and interactive maps of public lands (check out these from BLM and the Forest Service), these resources are typically not synched with each other. This leaves hopeful recreationists and outdoor enthusiasts trying to piece together a patchwork of mapping tools. Enter, the MAPLand Act.

The Act sets a series of deadlines for the Departments of the Interior and Agriculture, which house the agencies that play the primary roles in managing public lands, and the Army Corps of Engineers. More specifically, the Act covers federal land managed by the Bureau of Reclamation, the National Park Service, the Bureau of Land Management, the Fish and Wildlife Service, the Forest Service, and the Corps of Engineers.

By October 2024, the above agencies are required to adopt interagency standards to ensure their databases are compatible and interoperable in terms of identifying and depicting recreational uses and locations. By April 2026, the GIS mapping data that identifies all private lands on which there is a federal interest should be digitized and published. This step is meant to provide information that can be used to determine which lands might be able to provide access to public lands for recreation. The law requires that this process allow an opportunity for the public to comment or ask questions about these proceedings.

Then, by April 2027, the agencies have to put more substantive information on their respective websites. A few items are specifically outlined, including the status of road and trail closures; information on seasonal road and trail closures as well as their current open or closed status; details on which vehicles and recreational types, e.g., snowmobiles, electric bikes, off-road vehicles, are allowed on certain trail segments; and boundaries of hunting areas. Agencies will need to update this information twice a year at minimum to ensure notices remain current. This deadline likewise requires public comment.

The Act also comes with funding. For fiscal year 2022, $2.5 million has been allocated to Interior and Agriculture. From 2023 through 2025, that amount increases to $5.5 million. While these land management agencies have jurisdiction over the vast majority of public lands, the Corps of Engineers also received a significant amount—$1.5 million initially, increasing to $2.5 million for the subsequent three years.

Because the MAPLand Act is now enshrined as law, it would take another congressional act to reverse or alter its course. Thus, a change in administration likely will not derail these efforts. Moreover, the chances for this initiative to come to fruition are high as a result of the strong bipartisan support the bill received in both chambers.

Several questions remain outstanding, however. Will all this data be integrated into one, easy-to-use website, allowing users to overlay public lands from different agencies and explore opportunities for recreation opportunities? Or will users be required to continue to patch together information from multiple websites? Additional considerations center around whether this effort to digitize information about access and outdoor recreation opportunities on public lands will dovetail with the Administration’s broader activities on environmental justice, climate change, and conservation. Environmental justice communities regularly face obstacles to outdoors access. But because this effort does not directly relate to climate change, clean energy or transportation, affordable housing, workforce training and development, pollution remediation, or clean water infrastructure, it will likely not be considered a “covered program” under the Interim Guidelines of the Justice40 Initiative. That means investments in this mapping effort will not be required to meet the goal of directing 40% of the overall benefits to disadvantaged communities.

In addition, how will climate change’s impacts on a changing landscape be factored into the information the public can access through these online resources? Will they be current enough to allow recreationists to rely on them for up-to-date road and trail closures, as well as emergency alerts, such as a nearby wildfire or increased risk of flood from extreme precipitation events? Finally, how will the mapping and digitization efforts serve the overall goals of America the Beautiful—the Administration’s push to conserve and preserve 30% of all federal land and waters by 2030? And critically, how will the data collected in the efforts inform the American Conservation and Stewardship Atlas, and vice versa?

Interested observers can track the progress of this effort through regular reports to congressional committees in the House and Senate. The first report is due by April 29, 2023