A NAAQS for Greenhouse Gases?

In 2009, the Center for Biological Diversity and 350.org submitted a citizen petition calling on EPA to institute a national ambient air quality standard (NAAQS) for greenhouse gas emissions. Twelve years later, in January 2021, Administrator Andrew Wheeler issued a letter denying the petition. The denial was reversed six weeks later by Acting Administrator Jane Nishida, who stated that the Agency did not fully assess the issues raised in the petition and committed EPA to further consideration.

In this month’s issue of ELR—The Environmental Law Reporter, Eric Laschever discusses the flaws in the denial’s legal and factual reasoning and outlines the technological, scientific, and policy advancements made since the petition was originally filed. Rebutting Wheeler’s claim that NAAQS provisions cannot meaningfully address GHG emissions, the Article demonstrates how a potential GHG NAAQS would meet the CAA’s purpose and programmatic specifics.

Laschever first addresses the denial’s “textual” argument by conducting a review of CAA provisions. The first statutory condition for imposing a NAAQS is a pollutant, the emissions of which “cause or contribute to air pollution which may reasonably be anticipated to endanger public health.” The second condition, a pollutant resulting from “numerous or diverse mobile or stationary sources,” fits GHG emissions.

Wheeler’s denial focused on the third condition, a pollutant “for which [the Administrator] plans to issue air quality criteria under [§108].” Based on Natural Resources Defense Council v. Train, however, this condition only applies to the initial list of potential criteria pollutants. And the Joseph Biden Administration’s response to the petition, convening the Clean Air Scientific Advisory Committee to start the NAAQS process, signals plans to list GHGs as a criteria pollutant. 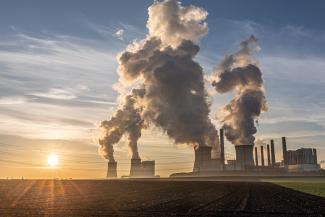 The Article also argues that Wheeler relied on a flawed understanding of the CAA’s structure. According to the denial, GHG emissions cannot be remedied by local controls as they are dispersed globally, and states are unable to meaningfully reduce GHG emissions. Laschever counters that reducing emissions globally requires local reductions, that many states are already effectively regulating emissions, and that a NAAQS would promote greater state coordination. Finally, he rebuts the claims that GHG emissions have no localized effect that can be measured by a monitor, and that the CAA’s interstate transport and “good neighbor provisions” would not function as intended under a GHG NAAQS.

Since the 2009 petition, Laschever argues, the policy justification for imposing a GHG NAAQS has become even more compelling. Implementing such a program would increase the United States’ international negotiating position and promote economic benefits through emissions reductions. All in all, he concludes, a GHG NAAQS is an essential tool for accomplishing the Biden Administration’s climate agenda.