In the Summer of 2017, ELI undertook a special project in memory of our dear departed colleague Angus Macbeth. We did so with support, encouragement, and input from across the ELI community and the American College of Environmental Lawyers, and in cooperation with the Environmental Council of States. Angus was the friend of many, but was also one of the great leaders in environmental law, a former president of the college, and a long-time supporter of ELI.

As Angus played no small role in the construction of the system of environmental protection as it exists today, and was also relentlessly committed to the pursuit of new ways to deliver environmental quality, we settled on cooperative federalism as the project topic. The Macbeth Dialogues sought to bring together leading experts to discuss the federal-state relationship in the environmental sphere, in hopes of shining a light on law and policy solutions for optimizing the configuration of governmental roles.

Under this project, we convened a Chatham House Rules gathering of current and former senior state and federal officials, many of whom had worn both state and federal hats. We also convened several dialogues with a broader array of stakeholders and did some rather extensive surveying. The resulting “Macbeth Report” is one of the more thoughtful pieces on cooperative federalism that has been rendered. You can find it for free download at eli.org/research-report/macbeth-report-cooperative-federalism-modern-era.

As the report reflects, there is considerable support for giving states with demonstrated capabilities greater independence and flexibility in running delegated environmental protection programs, but even enthusiasts for greater state primacy consistently agree that EPA must continue its leading role in developing national standards, conducting scientific research, and governing on interstate issues.

The report reveals broad support for flexibility for states in meeting minimum national standards, setting more stringent standards, and in enforcing delegated programs. Experts were more evenly split on state discretion to depart from national technology standards and compliance strategies as well as on primacy for criminal enforcement and environmental justice cases. But over 70 percent of those surveyed felt that the federal government should defer where states can do a better, or as good, a job, and over 50 percent of respondents felt that EPA intervention in delegated states should be limited to circumstances of documented failure or when the state has provided inadequate resources.

With the traction of sustainability policies in the private sector, driven in part by shareholder and customer demand, the report also explores whether a parallel flexibility in government oversight of high-performing companies might be possible under the rubric of public-private parallelism. The study also considers the role that citizens — equipped with unprecedented amounts of environmental information and operating in a socially networked world — will play as a driver of environmental behavior. 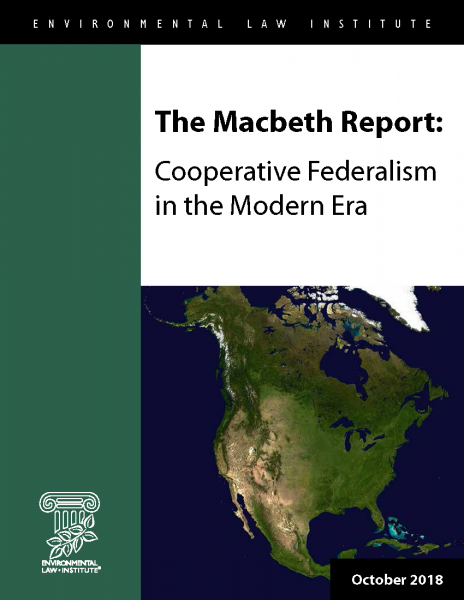 In terms of options for adjustment or realignment, “The Macbeth Report” points to possible recalibration of compliance expectations under a concept of actionable noncompliance, which could serve to shift the threshold for enforcement intervention from an absolute compliance expectation to one that would allow certain types of exceedances to be timely self-corrected without enforcement implications.

ECOS has recommended that EPA move to an audit system for oversight in lieu of matter-by-matter reviews. “The Macbeth Report” advises that auditing be first piloted in a few EPA regions and programs before broader deployment, so that the mechanics can be tuned. Permitting decisions may a good place to focus such pilot projects.

Recognizing the importance of the interstate dimension in defining the federal role, the report recommends that a formal structure be created to give downwind/downstream states a more meaningful voice. The study generally recommends greater use of protocols designed to provide aggrieved states with a time-limited elevation opportunity prior to federal intervention.

Given technology’s advance toward much more comprehensive, real-time understanding of environmental conditions, “The Macbeth Report” recommends that EPA and the states experiment with new approaches for framing compliance expectations, for example by using sophisticated fence-line monitoring systems to allow for considerably more within-the-plant flexibility.

This gives you a flavor, but there is considerably more there, so please give it a read. And many thanks to all participants and to Angus for his life’s work.