A National Academy of Sciences (NAS) Committee on Long-Term Environmental Trends in the Gulf of Mexico has embarked on a new study to “assess the cumulative effects of multiple restoration projects” on the Gulf coast. As background research for the study, the Committee held a meeting with academics and practitioners to shed light on whether and how restoration projects might be impacted by both short- and long-term changes. The findings presented were dramatic and sobering, and further underscore the necessity of pursuing comprehensive efforts to mitigate greenhouse gas emissions to avoid the worst-case scenarios. 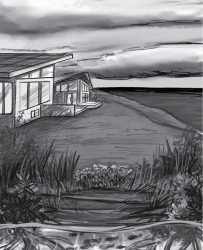 If current trends continue, a perfect storm of meteorologic, climatic, and geologic factors will swamp some of the restoration efforts taking place along coastal areas in the Gulf of Mexico. These efforts are the cornerstone of attempts to ensure a vital and resilient Gulf coast, both ecologically and economically. While the long-term viability of some land-building projects may be uncertain, they will provide crucial extra years that can make the difference between complete inundation in the near term and a more gradual encroachment.

Projects related to marshlands are particularly susceptible. If global greenhouse gas emissions continue on their present course, the long-term existence of new coastal marshes – such as the Caminada Headlands Back Barrier Marsh Creation, which began this summer as part of the Coastal Protection and Restoration Authority’s ongoing efforts to boost resiliency in Louisiana – is in jeopardy. The health and welfare of Gulf residents depends on these projects providing a needed cushion against encroaching seas.

Population along the Gulf coast has grown considerably in the last century. Home to less than a million people in 1900, the Gulf now boasts over 16 million residents in coastal communities, many of whom depend on coastal resources for their livelihood. In addition, Louisiana’s ports perform a critical role in maintaining uninterrupted flows of commerce and energy resources for the entire nation. And it’s not just people that require a well-functioning Gulf: a healthy coastal ecosystem supports a rich array of biodiversity, including many endangered species, such as the wetland-dependent eastern black rail.

Short-term physical changes often result from weather events and patterns—typically rainfall and hurricanes. The Gulf region has experienced a precipitous increase in rainfall intensity along with decreased storm duration. More rain in less time presents a potentially significant problem for coastal communities that have issues with drainage. For example, one 2016 storm produced record-setting rainfall in Louisiana—over 31 inches in 48 hours.

Hurricanes are occurring with greater frequency and intensity. These effects correspond to rising sea surface temperatures, an inevitable result of a warming atmosphere. In other words, warmer seas mean more hurricanes and more destructive hurricanes. With oceans warming at rapid rates, especially along the Atlantic coast and in the Gulf of Mexico, this trajectory potentially poses serious threats to coastal restoration projects. Despite this increased activity, the 2020 hurricane season spared restoration projects from most devastating effects. While this attests to the promise of these projects and their resiliency benefits, it only takes one significant storm to have long-reaching effects.

Perhaps more worrying than weather are the longer-term, climate-related factors that will impact coastal restoration and resilience projects. Sea level rise remains the most significant. Although some sea level rise is unavoidable, the extent of that rise will be determined primarily by our ability to severely limit greenhouse gas emissions in the coming decades. Doing so may help avert warmer seas and catastrophic glacial and ice sheet melt, and as a consequence save coastal wetlands from near-term drowning. The primary concern is whether coastal marshes will be overtaken by open ocean within centuries, or mere decades.

Global sea levels are now rising at rates of 3.5 mm per year. According to one recent study that examined paleo-marshes dating back over 8,500 years, when sea level rise exceeds 3 mm per year, coastal marshes are unable to maintain themselves and will eventually drown in the rising seas. These findings suggest that a tipping point has been passed, and the coastal marshland left in Louisiana will probably be inevitably submerged. While this inundation may be a relatively slow process, if current rates should climb to 7 mm per year or greater the coastal marsh drowning process may happen within decades rather than centuries.

Along with weather and climate factors, geologic trends pose an additional danger to coastal restoration. In short, as we’ve known for some time, the Gulf coast is sinking. The subsidence rate is most pronounced along the eastern Gulf and Louisiana, with mean rates of up to 9 mm per year. Numbers that were once considered worst-case scenarios are now the reality. Thus, sea level rise coupled with subsidence can yield waters rising at 12.5 mm annually in some areas. Well above the 7 mm threshold, these increases paint a dire picture indeed for certain areas. Fortunately, Louisiana’s Coastal Master Plan, which is designed to guide efforts to build and maintain land, incorporates these projections into its modeling.

Despite the grim forecast, coastal restoration projects, particularly wetland creation, are not futile. Rather, they are essential components of a robust and all-inclusive strategy centered on adapting to climate change impacts. Torbjörn Törnqvist, a geology professor at Tulane and co-author of the paleo-marsh study, remarked to the NAS Committee that although some restoration projects will ultimately drown, “even if it can delay the inevitable landward retreat by a couple of decades…that can make the difference between managed retreat and complete chaos.”

Creating and extending this controlled retreat phase stands as a crucial reason why coastal restoration projects must continue. Without them, people and other species that depend on coastal resources will not have sufficient time to adapt. With smart project selection and a constant eye on emerging science and data, coastal restoration can provide not only a critical physical barrier against storms and rising seas, but a temporal buffer as well.