When the pandemic started, it seemed you couldn’t turn a page or open an email without seeing “unprecedented” used in one context or another. And it was true—we were in uncharted territory, and among everything else, it was hard not to keep returning to that locution. I clearly remember sending a mass email using the word, thinking I was the first person to stumble upon this apt descriptor; little did I know how ubiquitous it would become. 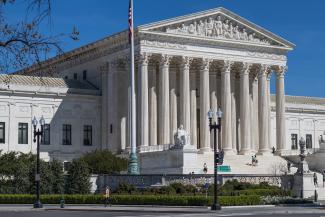 In the wake of the West Virginia v. EPA decision, issued on the last day of the Supreme Court’s term, the word possibly on the same trajectory is “disheartening.” It’s the first word I found, and—proving I’m never as original as I think I am—as analyses continue to dissect the majority, concurrence, and dissenting opinions, “disheartening” is appearing with growing frequency.

For so many, the weeks following the court's decision brought forth a blur of questions from people outside our profession, asking whether West Virginia “hamstrings” domestic climate action. My reply: That depends on what you mean by hamstring.

Does the decision sever EPA’s regulatory muscle? No. This was a relatively narrow holding around the agency’s Clean Air Act Section 111(d) authority and its ability to mandate that fossil-fuel-fired power plants switch their energy generation. The government has myriad options remaining for addressing greenhouse gas emissions at both the federal and state levels.

But does it strain that muscle? Yes, even if only from the perspective that it makes many needed actions that much harder. The full implications of the strain, and how long it will take to fully recover, remains to be seen.

Which is why I think people are gravitating toward “disheartening.” There is no doubt that attempts to mitigate climate change domestically will continue, at the federal level but also importantly at regional, state, and local levels. But at a time when many are struggling to maintain optimism in the face of this existential threat, and have been looking to our bedrock institutions and leaders to help steer a path forward, West Virginia made it that much harder to take essential next steps.

It’s also an apt word because many felt the decision was unnecessary, as the Clean Power Plan targets had largely been reached, compliance timelines had lapsed, and the administration argued it had no plans to enforce it.

There are many issues flowing from the decision, from the state of Section 111(d), to the effect on other Clean Air Act provisions, to the boundaries and effect of the emerging “major questions doctrine.” ELI is deeply invested in the outcome of these issues, for environmental and energy law and policy and for the future of administrative law more broadly.

But one thing receiving a bit less attention right now—and one which I think is critically important—is the effect this decision will have on tomorrow’s leaders. During my years in an academic institution, countless students talked to me about how daunting the climate change challenge is, and how difficult it is to maintain confidence given the magnitude of response required and slow acceleration observed to date.

Against this backdrop, West Virginia suggests that, regardless of purpose or cause, agencies may only take significantly impactful action if Congress explicitly spells out how to do so—which has long been anything but the norm for our federal legislature. Instead of incentivizing large-scale regulatory response, the decision incentivizes regulators to bite-sized measures that may have significant impact perhaps only in the aggregate. I worry about the effect of that signal on the next generation. Perhaps recent climate legislation will help send a counter-signal that accelerating action is possible, but that remains to be seen.

Over the next few months, and then years, we’ll start to see ripple effects of West Virginia in the regulatory, judicial, and legislative landscapes. From the proposed SEC climate disclosure rule to  federal legislation, we will get a glimpse of the breadth and depth of how “major questions” arguments may affect or limit agency actions, not only in the climate context but in an array of other circumstances as well.

In the meantime, I hope we find more ways to inspire and encourage tomorrow’s leaders.

This blog originally appeared in the Notice & Comment column in the September/October 2022 issue of The Environmental Forum and is republished with permission. Notice & Comment is the editors’ column and represents the signatory’s views.