In a Vibrant Environment blog post on February 17, 2017, we provided an overview of the types of approaches that cities and states can use to address the environmental and social justice implications of wasting 40%  of the food that is produced in the United States. We addressed reducing food waste before it happens, but because that is not always possible, we turn now to the next best alternative—rescuing or donating wasted food.

We focus in particular on the role that technology now plays in expanding food donation by consumer-facing businesses such as grocery stores, restaurants, and other food service providers. According to ReFED, these businesses generate 40% of food waste.

This waste occurs against the backdrop of wide-spread food insecurity. According to U.S. Department of Agriculture data from 2015, 42.4 million Americans, including 13.1 million children, lack access to enough food for an active, healthy lifestyle. This group represents roughly one in eight Americans and 13% of U.S. households.

Organizations such as Feeding America and Food Donation Connection have long played a central role in addressing this issue by facilitating food donation from grocery stores, restaurants, and other businesses. However, research indicates that grocery stores have the capacity to double food donations from 700,000 to 1.4 million pounds per year, and restaurants have the capacity to increase food donations tenfold – from 100,000 pounds to 1 million pounds per year. 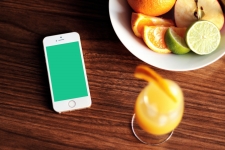 Smartphone applications (apps) and other web-based technologies provide new opportunities to realize this potential by bringing in new donors and new food, as well as by increasing the efficiency of continuing connections. ReFED estimates that the use of “technology platforms to connect individual food donors with recipient organizations to reach smaller-scale food donations” has the potential to divert 150,000 tons of food from landfills annually, providing 250 million meals per year, by lowering barriers to food donation.

Apps address the biggest challenge—transportation— in a variety of ways. In some cases, the receiving organizations must pick up the food. In other cases, such as 412 Food Rescue and Rescuing Leftover Cuisine, food is delivered by volunteers. Still other apps, such as Spoiler Alert, leave it to the donating business and their recipients to figure out how to transport the food.

Many apps, such as 412 Food Rescue, connect donors with nonprofit recipients in real-time to ensure that donations are picked up quickly, thereby addressing logistical barriers such as insufficient on-site refrigeration or storage capacity. Similarly, Feeding America enhances the efficiency of donations by providing drivers with hand held devices in order to better manage their routes.

Concern about liability for donated food is another key deterrent. Several apps address such concerns with educational materials on their websites about the expansive liability protections under federal and state laws. And, some apps, such as Zero Percent, train nonprofit recipients on proper handling practices. Still other applications, such as Copia, provide insurance to businesses that donate and require the nonprofits that receive the food to enter hold harmless agreements.

To counter concerns about the costs of donation, several apps assist restaurants in taking advantage of the federal tax deduction offered for donated food. Spoiler Alert, for example, offers app users fee-based services that include providing detailed data on their donations. Several apps provide a direct financial benefit by facilitating the sale of leftover restaurant food at a discount, such as Food For All and Too Good To Go. Yet another approach, used by TangoTab, offers diners deals at local restaurants. In exchange, the restaurant pays a fee to the app, which, in turn, donates a percentage to cover the cost of a meal provided by a local food charity.

To date, the majority of apps are limited in their geographical reach. ReFED characterizes the development of apps and software systems to reduce food waste as in the “pilot phase,” and predicts that many “will be developed” but only “a handful of the best ones will scale nationwide.”

It is unclear how long this scaling process will take, but these technology–based approaches to reducing waste and feeding the hungry promise to help realize the huge potential for expanding wasted food donation.

Some of the donation apps also facilitate sending food waste to composting and animal feed facilities. In our next Vibrant Environment post we will discuss food waste recycling. Look for our post in April!

Carol, Linda, and Emmett work on the Food Waste Initiative at ELI. Other blogs in the ELI food waste series can be found here.