This conversation with Danny Le, BPSOS, is part of the ELI Gulf of Mexico team’s “Why I Participate in Gulf Restoration” blog series. The series aims to highlight the views of community members impacted by the BP oil spill, and provide a glimpse of some challenges and successes they face in getting involved in the restoration processes.

After the end of the Vietnam War in 1975, many Vietnamese people fled to the United States to escape the Communist regime. Immigration continued over several decades, growing the Gulf coast Vietnamese population significantly. The Vietnamese community has significant ties to the Gulf seafood industry. A third of Gulf fishermen are Vietnamese and about 80% of Vietnamese-Americans in the Gulf are tied to the seafood industry, working in fishing, seafood preparation, and stores and restaurants.

The following blog highlights the perspective of Danny Le of Boat People SOS.

Danny’s family was among the first “boat people” to leave Vietnam. Traveling on a small wooden boat with 135 people on board, it took them five days andfour nights to get to Thailand. Even though he was only six years old at the time, Danny recalls the journey well. He says, “I still remember vividly the plight of our journey from Vietnam to Thailand…I think on the fourth day we were stopped by pirates, they came on our boat, they basically robbed all of our jewelry and they let us go…we were fortunate that they let us go.”Following a long journey that started in Vietnam, Danny Le moved to the Gulf in 2006. Danny’s father, an officer for the South Vietnamese government, spent four years in prison after the fall of Saigon in 1975. After his father’s release, Danny’s parents knew that Danny and his brothers didn’t have a future in Vietnam.

After arriving in Thailand, Danny’s family spent six months in a refugee camp before traveling to the United States, first arriving in Louisiana and eventually settling in New Jersey. Danny moved to Mississippi in 2006 to be closer to his parents. Knowing the community was still recovering from Hurricane Katrina, Danny searched for volunteer work targeted at the Vietnamese community, which ultimately led him to take a position at Boat People SOS (BPSOS). 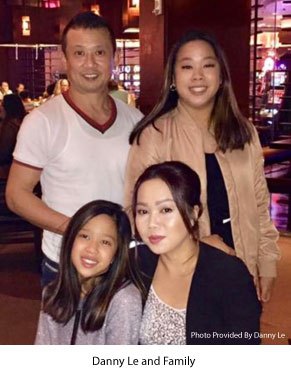 For the past 12 years, Danny has worked at BPSOS – a non-profit organization that supports Vietnamese people in the United States, Vietnam, and around the world. He is currently the Branch Manager for BPSOS’s Gulf Coast offices, which are located in Biloxi, MS and Bayou La Batre, AL. He works on many different projects, including working on issues related to the BP oil spill. Danny considers this work his most difficult. This is due in part to the lack of dedicated funding for the work. “We do [BP oil spill work] because we know our communities need us,” he says.

As Danny explains, effective restoration of Gulf resources is essential for the livelihoods of many in the Vietnamese community. Many of the Vietnamese fishermen lack transferable skills, leaving them with few alternatives to make money. With limited English proficiency, it is especially challenging for them to learn another trade. Danny estimates 70% of their fishing fleets were idle for all of 2017, saying there are hundreds of examples of Vietnamese fishermen who generated no income at all.

The Vietnamese community faces a number of challenges to effectively engaging in oil spill restoration. Danny considers language access the biggest barrier. Even with a Vietnamese interpreter, there is still a language barrier. Danny explains that effectively relaying information requires an interpreter who is well-versed in the subject matter and can also deliver messages in terms that the community understands. In prior meetings, he recalls that, “most of the community members attending the meetings walk out with more questions than they had before,” not understanding the information and terminology used by the interpreter. Danny is hoping that a bilingual specialist with expertise in restoration can be hired to better assist the community.

But Danny, along with his team at BPSOS and some volunteers, continue to work to engage the community in the restoration processes. They have worked to act as a liaison between community members, fishermen, and restoration decisionmakers. They attend monthly meetings held by the Mississippi Department of Environmental Quality (MDEQ) and, when possible, provide transportation so community members can also attend. They also host workshops for community members who cannot attend the meetings so they can relay information back to the community, request feedback, and then help community members submit feedback and project ideas.

Danny also hopes to continue to build relationships between community members and the restoration decisionmakers. For example, BPSOS, along with its partner organizations in the Gulf Coast Regional Collaborative Partners (which also includes Steps Coalition, Hijra House, and Mary Queen of Vietnam), plans to host an event called “Come Fish off My Boat,” inviting restoration decision makers to spend a day fishing with Gulf fishermen impacted by the BP oil spill. Danny sees this as an opportunity to better convey to the restoration decisionmakers the struggles the Vietnamese fishing community still faces.

“We want to be part of the restoration process.” Danny says. “Fishermen have a plethora of knowledge. They know the water. They know what works and doesn’t work. That’s why we want to propose ideas to decision makers about where and what needs to be done to restore the water. We really want that relationship or collaboration with them to utilize the expertise and knowledge of these fishermen so that they have a part in the restoration process.”

This conversation originally appeared in the ELI Gulf of Mexico team’s “Why I Participate in Gulf Restoration” blog series. The series aims to highlight the views of community members impacted by the BP oil spill and to provide a glimpse of some challenges and successes they face in getting involved in the restoration processes. Read the first post, which shares the perspectives of a fifth-generation oysterman, here.