In February 2022, the Biden Administration committed to spending over $1 billion on Everglades restoration efforts. Just this past month, the Administration proposed another nearly half billion. Why is there suddenly so much political pressure to save the Everglades? The truth is, this pressure is not new. Like many climate issues, there has been no rush to address the destruction of the Everglades until now, when critical water resources are at stake. 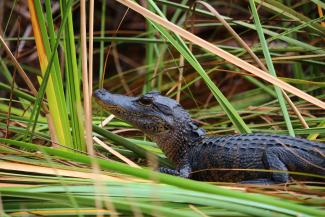 In the past hundred years, the Florida Everglades have been systematically destroyed for agricultural and urban development. In the early 20th century, the state began to drain large portions of the Everglades, and in 1947, Congress authorized the Central and South Florida Project (C&SFP) that would continue to drain and redirect water flow, build canals, levees, and water control systems. These projects continued for decades, destroying over half of the Everglades.

Scientists, ecologists, and engineers are now battling to restore that natural water flow in order to preserve the Everglades ecosystem. This battle began in 2000, with the passing of the Water Resources Development Act (WRDA), which established the Comprehensive Everglades Restoration Plan (CERP), a four-decades-long project that would protect the ecosystem and drinking water provided by the Florida Everglades to millions of people. WRDA states that “Congress believes it to be a vital national mission to restore and preserve this ecosystem.”

Without the Everglades, Florida would lack much of its drinking water and protection from storm surge and sea-level rise. However, “CERP projects operating to date have been limited and are disconnected from the landscape,” according to the National Academy of Sciences, Engineering, and Medicine, which provides regular independent scientific reviews of CERP. We are now over halfway through CERP’s project time line, and less than one-third of its components are complete.

If restoration of the Everglades has been in the works for over 20 years, why has CERP been unsuccessful? The main reasons include a lack of integration of science and technology, historic underfunding, inaccurate reports and schedules, and disconnect between the agencies involved.

WRDA establishes CERP as a framework for restoration, one that can and should be adjusted as new science and technology becomes available. However, independent scientific reviews of CERP’s progress show that this has not been the case. The latest independent scientific review, published in 2020, outlined a number of contributing issues. One is that certain vital projects are currently not prioritized. In addition, there are obstacles outside the scope of CERP, such as algae bloom, invasive species (although WRDA 2020, published after the Independent Scientific Review, does include a provision regarding invasive species in the Everglades), and water quality that are not being addressed, but are limiting the success of CERP projects. There is also a lack of scientific support with limited monitoring, management, and potential of projects. Modern tools and technologies are not being used to make decisions, and, finally but potentially most damaging, the effects of climate change are not being accounted for.

Like most federal and state projects, especially ones spanning multiple decades, funding is never guaranteed, but CERP funding has been historically limited, making it extremely difficult, even impossible, to finish projects on time. CERP is to be funded equally by the federal government, through the U.S. Army Corps of Engineers (the Corps), and the state of Florida—but Florida has spent more than double the Corps as of 2021. While the Biden Administration has promised increased funding, the cost of CERP has increased steeply in the years lost to underfunding. CERP was originally estimated to be an $8 billion project, but as of 2021 is estimated to cost $23.2 billion. As ecosystems continue to degrade and change as a result of climate change, this cost is likely to continue rising.

On the federal side, CERP is managed primarily by the Corps, as well as the U.S. Department of the Interior (DOI). These two organizations have very distinct goals. The Corps’ mission is to secure the nation and its economy by reducing disaster risk, while DOI is responsible for protecting the nation’s natural resources. However, protecting the land while altering and building on it may not be possible to do at the same time. Because the Corps is the primary federal agency involved in CERP, it possesses the ability to recommend CERP projects to Congress every five years. Upon congressional approval, CERP projects completed or in beginning phases have primarily been used to meet the needs of the Corps; infrastructure and construction projects to address the needs of the agriculture, recreation and urban sectors, and water supply—not the ecosystem.

The Corps is also responsible for developing the CERP Integrated Delivery Schedule (IDS) every year. The IDS is used as a communication tool across agencies regarding the status of funded projects. IDS reports have historically given a false impression of the status of CERP projects and time lines because the projections are made on “notional, approximate funding levels that would be needed to sustain that work displayed in the IDS for a particular year.” In 2019, the IDS communicated plans based on the assumption of nearly double the realistic funding, creating an unrealistic project time line.

Moving forward, there is a lot of momentum behind CERP and a lot of reasons to keep the Everglades alive, but agencies involved need to make a few important changes. First, science-based decisions need to be at the forefront of all plans, especially regarding the impacts of climate change. Time lines and funding need to be transparent across all parties, and since funding is never guaranteed, time-sensitive projects need to be prioritized for funding, research, and support. In any decades-long, multi-agency project, agencies with different missions need to find a common ground—in this case, to protect water supply and the ecosystem—and plans need to constantly be reevaluated and updated. When a compromise between agencies and projects is not possible, stronger policy provisions to WRDA could do a better job as a framework for addressing these types of obstacles and holding government agencies accountable.