For officials in the Midwest and Southeast, the day is long past to seize the carp. 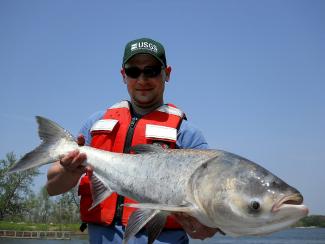 Invasive carp were introduced from Asia to the southern United States in the 1960s and 70s as an environmentally friendly way to control algae and aquatic weeds. The four introduced species — grass, bighead, silver, and black — didn’t take long to escape and enter the Illinois and Mississippi rivers.

Nowadays, “friendly” might be the last word locals use to describe the fish. Lacking a true stomach, the bighead carp can balloon to over 100 pounds. Grass carp gobble up to half their body weight each day. Combined, the carp have demolished local plankton and crowded out native fish populations.

Invasive carp also threaten the health of fishers. When moving through a river, motorboats are greeted by a hailstorm of silver carp that leap several feet out of the water when startled. Airborne fish will at times thwack humans, causing concussions and even broken bones.

Carp now make up as many as nine out of 10 fish in the Illinois and Mississippi rivers — and there’s no end in sight to their feast. Policymakers are concerned these fish will spill over into the Great Lakes, which are connected to the Illinois River by the Chicago Sanitary and Ship Canal. If introduced, invasive carp could annihilate the lakes’ $7 billion sport fishing industry.

Officials are frantically working to avoid this fate. In 2009, Michigan and four other states filed a lawsuit against Illinois to shut down the Chicago canals, to no avail. So far, the only solution in place is a series of three underwater electric barriers in the canal that send shocks to repel the fish. These cost $270 million to build, and maintenance clocks in at $16 million a year, according to PBS. Yet a few fish continue to slip through the cracks.

Ramping up efforts, Illinois and Michigan secured funding early last year to build a fourth barrier 10 miles ahead of the existing ones. With a hefty price tag of $858 million, the project adds a slew of new tactics in the people versus piscine war: loud underwater sounds, air bubbles, and a lock to flush out larval fish and eggs.

In fact, dining halls at the University of Illinois partner with nearby fisheries to serve more than 10,000 pounds of carp to students every year. And researcher Mark Morgan at the University of Missouri figured out a way to grind the fish into a nutritious powder to ship to countries in need.

But the protein has yet to attract a sufficient market, mostly because carp is quite bony, and everyday consumers are put off by the name. Many perceive carp as mucky, bottom feeders. In reality, the carp species here feed on plankton, and reportedly taste quite good.

Perhaps all invasive carp needs is a makeover. Illinois state officials and partners are working on crafting a new name to up the fish’s commercial appeal, similar to how “Patagonian toothfish” was renamed “Chilean sea bass” by the U.S. National Marine Fisheries Service.

As of press time, this rebrand is postponed — but hopefully not for long. Carp contains heart-healthy elements like iron and calcium, and omega-3 fatty acids. From the humble opinion of one editor, households and restaurants alike would benefit from a new type of carpaccio on their menus.

This blog originally appeared in the January/February 2022 issue of The Environmental Forum and is republished with permission.