Our cities are booming in both population and area. This uncontrolled land expansion, known as urban sprawl, results from several factors including transportation technology, income, consumer preference, and housing pressures. Unfortunately, urban sprawl can negatively impact the most vulnerable communities. The same factors that bring about sprawl also combine to produce “food deserts,” the lack of fresh quality food in an urban setting. For example, a 2014 John Hopkins University study showed that access to both healthy food and the number of supermarkets decreased in poor and minority communities when compared to their counterparts. Moreover, a 2016 Landscape and Urban Planning journal article shows that as low-wage jobs are generated in the areas of new urban growth, low-income communities in urban centers face increased difficulty finding entry-level jobs.

Urban agriculture has had moderate success addressing these challenges. In particular, one emerging method known as “aeroponics” may provide a more sustainable solution to expand access to local produce in the urban core while simultaneously providing stable employment opportunities for community members.

Urban agriculture can help address an array of issues created by urban sprawl, such as poverty, unemployment, public health, and the environmental impact of traditional carbon-intensive farming practices. In addition to bringing local produce into neighborhoods and offering employment opportunities, urban farms can educate citizens on the importance of eating healthy, teach them about environmental stewardship, and provide training on the skills needed for managing the farms themselves. Strong evidence shows that regardless of profit, urban farms bring citizens closer together by providing spaces to build social bonds through interaction and community engagement. This is especially evident in communities where green spaces and community buildings are challenging to find and develop due to zoning laws and availability of land for purchase.

Despite their well-documented benefits, most urban farms struggle to make it in the marketplace. In 2016, the British Food Journal found that the average sales for all urban farms were just $54,000 per year with the median income level sitting at $5,000. Another 2010 study conducted by the Journal of Extension found that among 243 self-reporting urban farming projects, 49% had $10,000 or less of total gross sales. Unfortunately, for those hoping to employ members of the local community, these bottom lines simply cannot support full-time employment, let alone for a single owner or manager. 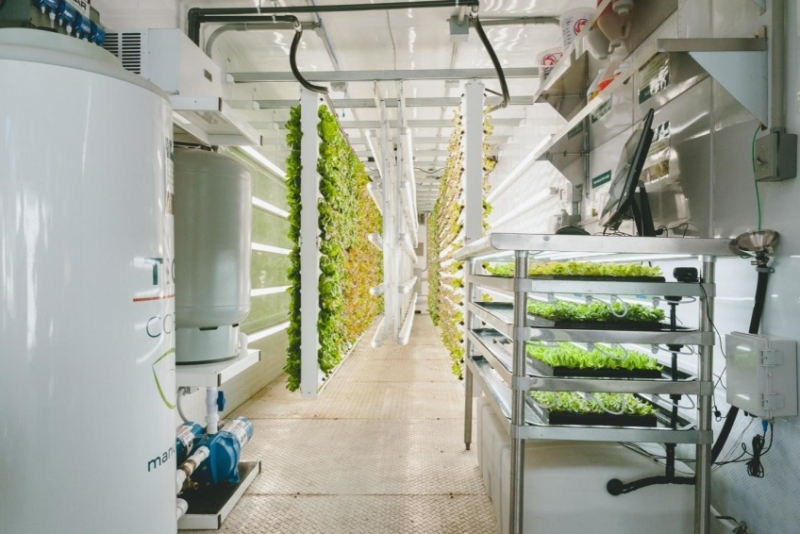 A new-age farming practice called aeroponics has the ability to make a large impact in impoverished communities due to its resource-conserving practices and high output potential. Aeroponics is a soilless model that utilizes a sprayer system to apply nutrient-rich water to a suspended root structure. Aeroponics differs from its sister methods, aquaponics and hydroponics, by growing root systems without direct contact with water. The applied spray is concentrated with essential macro- and micronutrients, typically provided from purchased chemicals but does not require pesticides. Producers have the ability to control the entire growing environment by keeping the setup in an enclosed space and climate-controlled.

Companies like Vertical Roots, Modular Farms, and Freight Farms are leading the way with smart data that allows for automated adjustments to room temperature, light intensity, carbon dioxide levels, and nutrient concentration. While the opportunity of feeling like Matt Damon in The Martian might be enticing enough, these boxes have several environmental and business benefits as well.

Vertical Roots, for example, is able to mitigate 95% of its water loss by simply catching the runoff and circulating it back to the system’s reservoir. All of the growing operations occur within a shipping container box, a 40x8x8-foot space. Its plants are suspended vertically, meaning their container model can optimize space to produce four acres of land within a one- to two-month schedule at a fraction of the acreage of a traditional farm. This design concept, also used by Freight Farms, not only conserves space, but also allows for the farms to be portable to different locations.

Information provided by Vertical Roots shows that their pod method, which includes four boxes of farms, can produce roughly $200,000 of yearly income on leafy greens. An expensive purchase price of over $500,000 would likely keep any single person from buying the pod themselves, but utilizing municipal support funds, loan programs, and philanthropic aid could offset the daunting first step. Upon running operations with no debt or loan paybacks, a single pod could provide well-paying jobs for five or more people.

Every system has its drawbacks, and aeroponics is no exception. The systems are typically located in an enclosed space for climate-control optimization, which requires high-intensity light spectrums, temperature controls, and other monitoring equipment and this comes with an expensive monthly electric bill. Environmentalists also note that producing the shipping container, ordering the container to be shipped to your location, stripping it of its potential toxins, and outfitting it with advanced technology greatly diminishes the sustainability of the system.

These concerns are valid, and growing methods should be improved upon to reduce the carbon footprint. Nonetheless, aeroponics farming concepts may present a cleaner, more community-driven alternative when compared to the traditional farming methods that take up hundreds of acres of land, several states away. As our cities expand and poor communities find themselves with less access to quality food, organizations can lead the way in bringing food into the neighborhoods that need it the most. Successful business models that capitalize on aeroponics’ ability to optimize space and resources can not only produce fresh food, but also reduce our farming carbon footprint.