When was environmental law first recognized as a field worthy of endeavor? Legal academies began teaching courses in the new laws as they were propounded a half century ago, but the field existed earlier. It could be found, if only in fragments, in some law schools and engineering schools and colleges of agriculture, mining, and forestry. And there were repositories of environmental professionals in the government’s land bureaus and extension services.

I would argue that the foundational text is one that synthesizes these pieces into a whole and gives a central ethic advancing environmental protection: Aldo Leopold’s A Sand County Almanac, published in 1949, a year after his death. Leopold knew the field lacked an animating principle. “As far as I can detect,” he writes, “no ethical obligation toward land is taught in these institutions,” he says of the academies.

It is worth reading again today, as I did when a snowstorm cut off power for four days and I could not use my computer. That is a perfect time for reading the month-by-month almanac of essays that Leopold wrote in “the shack,” the wood-heated farmhouse on a worn-out 80 acres that he worked to restore in harmony with the local ecology. Once again I was impressed how Leopold deals with the same issues that confront environmental policy today—and he does so with lucidity and insight that still serve as an inspirational bequest to the present time. It is a practical guide for environmental protection.

He was an alumnus of the Forest Service and taught at University of Wisconsin, where he became known as the nation’s expert on wildlife management. He recognized the economic and ecological conflicts embodied in resource ownership and use, as well as in instruments of governance both public and private. It all came together in the final chapter, titled “The Land Ethic.”

His guiding star is expressed in a simple couplet: “A thing is right when it tends to preserve the integrity, stability, and beauty of the biotic community. It is wrong when it tends otherwise.” Can anyone not see the principle of environmental assessment that would not become required for another twenty years? Or the Clean Water Act’s central mandate to “preserve the biological integrity”
of the nation’s waters?

But the ethic has a logical implication for resource ownership and use that is equally important: “In short, a land ethic changes the role of Homo sapiens from conqueror of the land-community to plain member and citizen of it. It implies respect for his fellow-members, and also respect for the community as such.” Here again, we hear early seeds of environmental justice’s emphasis on the community. “The individual is a member of a community of interdependent parts. . . . The land ethic simply enlarges the boundaries of the community” to include the larger ecosystem.

To Leopold, conservation is something more than a Muir-esque or Thoreau-like paean to primal nature. His approach is sternly practical. “Health is the capacity of the land for self-renewal. Conservation is our effort to understand and preserve this capacity.” In that epigram, he recognizes the role of “individual responsibility” to nature. Leopold, who spent his life in part in getting government into the act, nonetheless says that isn’t enough. He places on all people an obligation to observe the land ethic in their lives.

Private landowners must enhance the health of their lands regardless of government subsidy or commercial incentive. “One basic weakness in a conservation system based wholly on economic motives is that most members of the land community have no economic value.” Further, “Lack of economic value is sometimes a character not only of species or groups, but of entire biotic communities: marshes, bogs, dunes, and ‘deserts’ are examples.” Leopold feels that “a system of conservation based solely on economic self-interest is hopelessly lopsided” because it doesn’t value species critical to self-renewal. Today’s infatuation with charismatic megafauna cannot even touch the emotion unleashed by “the fierce green fire” a young Leopold saw die in the eyes of a wolf he had been paid to shoot as vermin. He recognized a top predator whose removal ultimately harmed the land community. He would never again kill a wolf.

Leopold reflects on the fact that the common person has no recognition of from where comes winter heat and is missing a key driver in a personal land ethic. He notices a dead oak on his property. It had done its service to the local ecology. He decides to saw it into firewood, the oak’s last contribution of “good wood” to the community.

This page in his Almanac may be the earliest comprehensive summary of law and environmental protection. As he cuts through the annual growth rings, he gives a detailed accounting of ecological calamity and resource legislation, but in the opposite order. The first few rings are narrow because of the Dust Bowl era. Then the stock markets plunge. “If the oak heard them fall, its wood gives no sign. Nor did it heed the Legislature’s several protestations of love for trees: a National Forest and a forest-crop law in 1927 . . . a new forest policy in 1921.” All the way to the center, and then forward in time to the other side.

I would have loved to see Leopold’s description of the law’s future rings, but he only tells us that we too possess the saw to view across the years, the wedge and the axe for other perspectives. Thus he does give today’s environmental professional a guiding lodestar and tools of analysis and decisionmaking. And he charges us of the present to keep laying down “good wood” in response to today’s environmental challenges.

Notice & Comment is the editors’ column and represents the signatory’s views.

With less than two weeks to go until the Opening Ceremonies of the Beijing Winter Olympics, the Chinese government said it is battling “extremely unfavorable” weather to clear the city’s skies of hazardous smog. . . .

A relapse into Beijing’s hazier days during the Olympics would be especially embarrassing for a city that went to great lengths to deliver blue skies during the 2008 Summer Games. Then, the cleanup effort required hundreds of factories to be shuttered or relocated. Thousands of home coal-burning boilers were converted to natural gas.

Air quality in the city improved by 50 percent over that summer, according to official numbers. The drastic change meant more than just a welcome respite for Beijingers, underscoring the pressing health concerns of pollution. By comparing mortality rates in Beijing that summer to other cities in China, economists estimated that a 10 percent decrease in the particulate matter known as PM10 prevented about 196,000 premature deaths.

This past year’s UN summit at Glasgow proved once again that the international community is doing something about climate change—just not enough. Many, but especially those from younger generations, have grown exasperated with world leaders and global institutions.

So it seems almost radical to imagine a world where a UN agency is the one to lead massive economic and social reforms that result in an eventual drop in atmospheric carbon dioxide levels. Yet that’s exactly the plot of The Ministry for the Future, science fiction writer Kim Stanley Robinson’s latest novel.

In his 576-page tome, Robinson envisions a society that overcomes climate change through a million and one solutions, both inside and outside of traditional institutions. Nations, central banks, and legislators are crucial actors, but so are activists, rioters, and eco-terrorists. In the end, climate change becomes a catalyst for creating a future where all human beings live in a more just and peaceful world. The optimistic ending was enough for the New Yorker’s Joshua Rothman to pronounce Robinson as “the only writer who had offered me some hope about our collective future.”

I also felt particularly moved by this novel. It was one of several sci-fi books I started reading during the pandemic as an escape—though I ended up getting boomeranged right back to reality, probably because I didn’t understand what sci-fi really is. As the writer Octavia Butler, whose own novels Parable of the Sower and Parable of the Talents present a cautionary tale on climate change and social inequality, put it in a 2000 interview: “A lot of people think science fiction is Star Wars, and you have to be 14 to enjoy it.”

Those people used to include me—someone who wrote off sci-fi and fantasy as soon as I had gotten over my Harry Potter phase. But getting older, and facing realities that can sometimes feel like works of fiction themselves, has reawakened a desire to read neat conclusions about heroes saving the day.

Sadly even in sci-fi, there’s no such thing. But speculative fiction can provide an avenue for reflecting on our present and processing the future that’s more valuable than pure escapism. Robinson’s book is only one of many examples of how sci-fi grapples with the questions and issues of our time. In an interview with Papercuts magazine, writer Ted Chiang describes the genre as stories “about accepting that change is going to happen and that we will have to deal with the consequences, positive and negative.”

Science presents us with a sea of potential climate scenarios, but cognitively understanding this future is different from experiencing it. How then, can we overcome our limited understanding?

One way (and I’m not kidding!) could be to read more sci-fi. Reading lets us digest what we’re up against through stories and the characters that live through them. As Chiang says, “We live in a world undergoing constant change, and science fiction helps us prepare for that, cognitively.”

It may even help us take action in our (real-life) present. On the power of making predictions through storytelling and in life, Butler says it best. In a 2000 essay in Essence magazine, she writes: “So why try to predict the future at all if it’s so difficult, so nearly impossible? Because making predictions is one way to give warning when we see ourselves drifting in dangerous directions. Because prediction is a useful way of pointing out safer, wiser courses. Because, most of all, our tomorrow is the child of our today.” —Akielly Hu 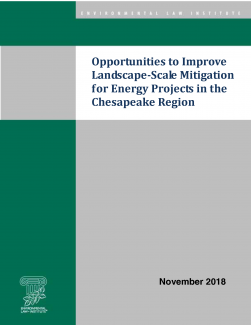 There are numerous applications for large linear energy projects – natural gas pipelines and electric transmission lines – that will affect the lands, waters, and resources of the Chesapeake region. At the same time, the states in this region are experiencing challenges in meeting their goals for conservation of lands, waters, and natural and historic resources. New and revised state-level practices can address the impacts of proposed projects and improve land conservation outcomes.

(Annapolis, MD): A new report prepared by the Environmental Law Institute for the Chesapeake Conservation Partnership, a network of conservation organizations and natural and cultural resources agencies, recommends specific actions that Maryland, Pennsylvania, and Virginia may consider to address the impacts of proposed energy projects while improving land conservation outcomes.