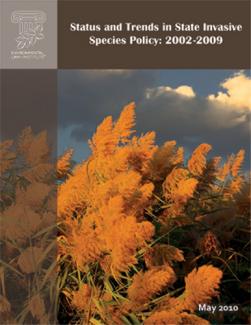 Status and Trends in State Invasive Species Policy: 2002-2009 reviews developments in state laws and regulations governing invasive species in eleven states. It finds that invasive species laws and regulations are often fragmented and incomplete and have developed primarily on a species-by-species basis in response to crisis. As a result, they often fail to address potential future invaders or close off known invasion pathways.

Early Detection/Rapid Response (EDRR) is a critical tool for identifying and eradicating introductions of new invasive species and pests. The effectiveness of EDRR largely depends on a supportive legal framework that can facilitate quick action. However, a number of states either lack the appropriate legal framework or contain restrictions (such as on the use of pesticides, or the area/manner in which they can be applied, etc.) that hinder the effective use of EDRR. It is important to understand where these gaps in state authority lie in order to address them at the legal and policy level.

ELI's Invasive Species Program works to prevent the introduction and spread of invasive species in the United States. Invasive species — like quagga mussels, sudden oak death, Burmese pythons, kudzu, and Asian tiger mosquito — cause an estimated $137 billion per year in environmental and economic harm and harm to human health. Smart state and federal laws and policies can prevent new invasions by closing off the pathways that these species use to invade. Invasive species arrive as a result of intentional importation as well as by hitching rides on ships and other vectors.