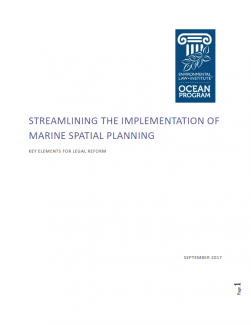 The regulation of human activities at sea, and the environmental impact of these activities, have long been a source of frustration for domestic and international policymakers.

Ocean resources are like money in a bank account. If those who access the account know how the funds are managed, they will be aware of exactly how much money they can withdraw today and how much will be available for them in the future. If, on the other hand, there are no rules or control over the account, each user will try to withdraw as much money as possible, and sooner or later the account will be emptied. Unfortunately, to date ocean regulations in many coastal states have been unable to provide the necessary level of certainty. Regulation of marine resources has been characterized by a use-by-use approach that overlooks the way human actions at sea affect each other.

Looking at the failure of most national regulatory efforts, some ocean experts have argued that managing spatial areas of the sea in order to maximize one or a set of objectives might be more effective than the use-by-use approach. Implementing a comprehensive system of area-based management requires a two-step process of planning and zoning. Marine spatial planning (MSP) involves assessing ocean resources as well as current and future uses, identifying compatible and incompatible sets of uses, and developing a spatial plan that proposes types and locations of various management areas. After a plan has been developed, the ocean zoning (OZ) process translates the marine spatial plan into enforceable legal rules. This is how the process usually develops at the national level.

There are several different approaches that countries can follow to ensure adequate legal implementation of MSP. This document summarizes the key regulatory elements of four successful experiences: the Massachusetts Ocean Act of 2008, the Barbuda Coastal Zoning and Management Regulations of 2014, the 2009 United Kingdom Marine and Coastal Access Act (and the Marine (Scotland) Act of 2010), and Belgium’s Royal Decree of 2014 adopting MSP for the Belgian North Sea.