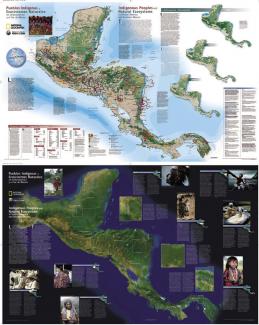 In January of this year Native Lands’ new map, Indigenous Peoples and Natural Ecosystems in Central America and Southern Mexico, was completed. It is an update of an earlier map, The Coexistence of Indigenous Peoples and the Natural Environment in Central America, published in 1992. Both maps were collaborative efforts between Native Lands and the National Geographic Society. The original map put on display forest cover and areas of indigenous use and occupation. The current map contains these elements but has added coastal-marine ecosystems and southern Mexico, to include the entire Maya region as far as the Istmo de Tehuantepec.

Like its predecessor, this map is bilingual, with texts in English and Spanish.

A team of specialists from each of the eight countries mapped spent roughly a year and a half, from October 2000 through January 2002, gathering data for the map. During this time, they consulted with a wide range of experts – biologists, anthropologists, geographers, conservationists, fishermen, indigenous leaders – in a series of meetings, workshops, and visits to pull together accurate information on the following dimensions:

Indigenous areas: Data for this dimension were gathered through consultation with the indigenous peoples in the region, in workshops, meetings, and field visits with indigenous leaders.

Larger maps containing greater detail are being produced by project coordinators in Panama, Costa Rica, Nicaragua, El Salvador, and Honduras. Starting in late 2003, the coordinators for Mexico, Guatemala, Belize, Honduras, and El Salvador will work together to produce a comprehensive "Maya Map" that will show forest cover, indigenous use areas, coastal ecosystems, and archaeological sites.